Savages, the band so great that so far we’ve reviewed them not once, not twice, not three times, not four times but FIVE WHOLE TIMES (including this one) in their career, one which has still to reach it’s first anniversary. And let’s not forget they were a New Band of the Day back in May during which month we also interviewed them. Phew, no wonder in Ged’s review he mentions the word “hype”. What makes this review special though, and the main reason why we’re running yet another review of the band, are the wonderful photo’s, both of which are ÃÂ© Kaz Wyatt.

If Savages did not exist, it would be necessary to invent them …. but they do, so we don’t have to. Savages are just perfect. Too perfect. Too good to be true. Unbelievably good. I was fully prepared to hate them, or at least, to be disappointed. The accusations of hype. John Robb’s evangelical appraisal”Â¦.

But they were great. They look great. They sound great. They have class. They have style. But most of all, they are serious. They don’t smile. They don’t talk (very much) between songs. They just play. Serious music. They have a gravitas about them and a mystique. Hence the (lazy journalistic) Joy Division (tag) thing. That and the fact that Jehn, the singer, looks like Leslie Caron being possessed by the spirit of Ian Curtis, giving her those graceful but jerky movements. And of course the fact that the bassline to Flying To Berlin is a bit like that of Colony.

The guitarist is astounding and could well be a potential successor to John McGeoch in terms of dynamics, skill and imagination. The drummer is like a more technically proficient Palm Olive, an inventive hard-hitter who bounces on her stool. The bassist gets a great sound out her instrument is the Now Waves Kim Deal.

City’s Full,
Give Me A Gun,
Strife,
I Am Here,
Another War,
Flying To Berlin,
Shut Up
Husbands.

The venue was busy but not full to capacity as it was a Monday night. The audience were a pretty even split between 18-21 year olds and 42 -50 year olds. Everyone left impressed. That was a great band. An extremely classy, stylish, cool and serious band.

They seem too perfect but their weaknesses are the (current) lack of one, great, stand-out, classic song (nothing as vulgar as a hit single, they don’t exist any more anyway) and the fact that at the Joiners the volume was surprisingly low and despite having their own soundman, Jehn seemed unhappy with the fold-back. She teeters on high heels and looks tough and vulnerable, sexy and aloof. I worry that she was/is an actress and she is playing a part, when musically the passion, muscle and dark heart seems very real indeed. I hope that Savages are what they seem; the band we’ve been waiting for.

All words by Ged Babey & all photo’s copyright Kaz Wyatt. More work by Ged can be found here. 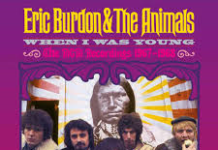 Eric Burdon & The Animals – When I Was Young – album review

Ding Dong The Witch Is Dead is number one….in Scotland

July 29, 2015
We use cookies to ensure that we give you the best experience on our website. If you continue to use this site we will assume that you are happy with it.Ok