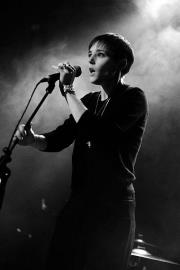 As featured on Louder Than War as our band of the day on Tuesday, all-girl garage rockers, Savages played a fascinating gig at the Fuhrer Bunker in Salford last night. The band met in an Army recruitment centre and was persuaded to start hitting the gigging circuit by none other than the great British Sea Power. It’s no accident that there is a sudden buzz around Savages. They’re raw, noisy and full of aggression in similar style to the great post-punk bands of the early 80s.

The venue is in a run-down, uninhabited, industrial area of Salford. The building itself seems to be literally a mechanic’s workshop with its licenced bar being an endearing and comforting table with a few cans of Red Stripe behind it.

We’re told the gig tonight is to hold 111 people; a comfortably specific number, but one that sits well with adding to that underground atmosphere of the event itself. It feels like there is a certain microcosm developing at the gig. Although it’s only a small sample of the band’s following, there’s a clear variety in age and background clear from scanning the faces in the audience.

For the stage itself, a wooden cage/fortress has been erected in the centre of the room. 111 people gather round, pressing against the wooden structure as support band, Pins take the stage. Pins manage to take the art-rock, experimental aspects of bands like Warpaint and Vivian Girls and fuse it with pop-noise buried in distortion and reverb. The image is important for the band, not that they don’t already prove themselves with their music. They sound cool and they have the image to match, not just in the way they dress or style their hair, but with the full groove and evident relationship on stage. For a support band there is not one sense of impatience in the crowd. People seem to be intrigued and wishing to hear more.

Savages finally appear, lead vocalist, and possible future icon, Jehnny Beth wearing all black, like a young Ian Curtis. The rest of the band takes to the stage quite professionally but looking like old school punk rockers, with hair over their eyes. Kicking into the first track, and what seems to be one of their only songs they have online, ”ËœCity’s Full’, they transform from four normal, but quite cool looking women to the spirited and primal post-punk musicians that they have earned their credibility for so early on.

Savages play their set with a complete exertion of energy and emotion, occasionally taking to the floor, clumsily knocking equipment about and tearing the stage apart. The rhythm section is pounding and consistent, perhaps showing a few dub and dance influences in their music. There are some influences of Public Image and Gang of Four. It’s Ayse Hassan’s bass line that really heightens this. It just makes people want to dance. The venue itself isn’t really designed for the crazy dancing that should be accompanying the music, but it’s clear that with the right venue, perhaps at one in the near future, they may develop an audience which they can really manipulate with their music. That’s the key to their sound, they are hypnotic. You can’t help but move your feet. You’re able to stare at people across the room and see them doing movements identical to yourself.

Guitarist Gemma Thompson has as much energy as the standard post-punk guitarists, focusing on distortion and noise, seeing how loud she could make it go, whilst still playing the tune she’s supposed to be; leaning towards the amp for feedback when needed.

The image of the band is quite compelling. Jehnny Beth has a bone structure that creates an interesting effect when the lights are shining on her face in a certain way. Some photographers are desperate to get a picture of the band, some scaling the cage itself to get the best shot. Even the daughter of the late Joy Division frontman knew she had to be attending such an important gig. Not only is it a surprise in the sense that it is Natalie Curtis, but also that Savages have great similarity to early Joy Division
There is something inimitable about this performance. The wooden structure in which the band play in creates an unusual watching experience. The band performs to all angles, creating an almost live studio atmosphere rather than a gig.

There’s a strange excitement and buzz around Savages. People leave the gig feeling quite overwhelmed with the performance they have just seen within that great wooden cage. It seems as if they’ve seen something before any others have. Their debut Manchester gig may have been a success, but there’s a little bit more that is yet to be revealed. There is next to no publicity online at the minute. Perhaps we’ll be expecting some sudden burst of productivity over the next few months as they begin to develop this subtle legacy that is very much in its infancy.
Savages are touring with The Vaccines currently with a series of gigs leading them to Salford’s Islington Mill on the 30th May.