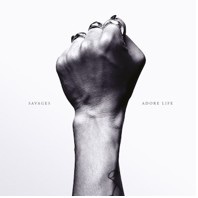 Savages’ second album Adore Life was recorded in RAK Studios, London in April 2015. Johnny Hostile was the producer and Richard Woodcraft the engineer. Anders Trentemøller took care of the mixing in Copenhagen.

‘The Answer’ Video Details:
We’ve observed our audience all around the world and noticed that something is happening. People want to be pushed to do good, or to be good, or just to feel good. We wanted a very intense video, that felt like banging your head against the wall, focusing on our audience: a portrait of our crowd, an homage to music lovers and the good people who are coming to gigs and shouting their lungs out, or just smiling at the back. We were touched by them every night, and wanted to get their message out there: loud guitar music is still alive and still connects people.

The video was directed by Giorgio Testi at Pulse.

Full tracklisting for ‘Adore Life’:
The Answer
Evil
Sad Person
Adore
I Need Something New
Slowing Down The World
When In Love
Surrender
T.I.W.Y.G.
Mechanics

Savages will perform a special early morning show at London’s iconic 100 Club at 8am on Tuesday 26th January 2016 to mark the release of ‘Adore Life’. There will be just 300 spaces, with tickets available on a first come first serve basis.
Please go to http://sisterraysoho.tmstor.es/cart/product.php?id=26528 to pre-order the album and gain access to the show.

January 15, 2018
We use cookies to ensure that we give you the best experience on our website. If you continue to use this site we will assume that you are happy with it.Ok