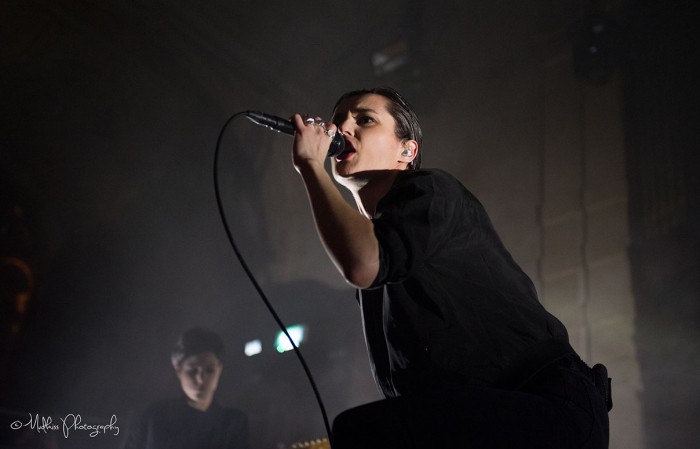 Louder Than War’s Anastasia Connor (words) and Melanie Smith (photos) were drawn to the much anticipated Savages show at the majestic Albert Hall, Manchester, and here is the review with photo gallery.

I have to warn you that this story doesn’t end on a happy note. I’ve never been a fan but somehow always felt uneasy about disliking this band. I remember the frenzy of their austere gothic post-punk debut Silence Yourself. I get what they were saying about not wanting to write sad love songs, about young people’s duty to rebel and their own refusal to do meaningless encores. Some of my favourite bands were their fans and they promoted artists I liked. And yet…

My first experience of Savages goes back to the spring of 2012 when they played a low key gig at a West London cinema to an audience of about two dozen people. At the time they were a buzz band with a reputation for intense live shows. That night they were everything they were meant to be: direct, uncompromising and heavily indebted to their post-punk roots. Don’t get me wrong, I didn’t have a problem with their debut being so brazenly derivative. Recycling is what pop music and culture is about and is essential to its nature.

The problem is that great bands don’t just borrow or even steal; they create a new world, a new headspace that amounts to more than just a sum of its constituent parts. Sadly, it seemed that although Savages had a sharp instinct about the direction they were heading into, they failed to deliver for lack of original ideas. 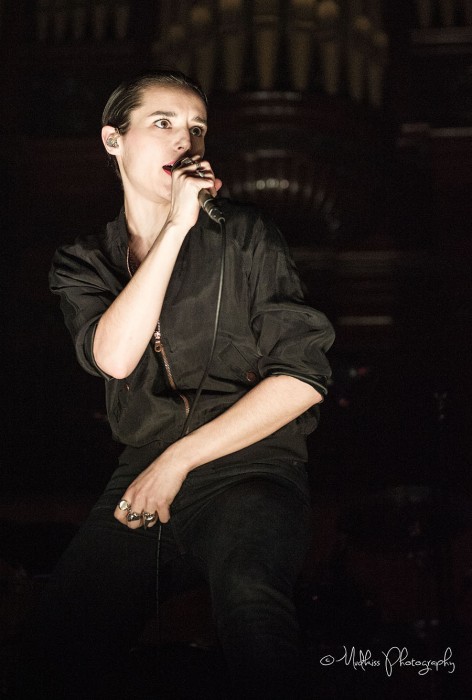 More than anything, however, it was their portentous, zealous attitude that put me off their music. And there was plenty of evidence, from pretentious notices shaming fans into not talking pictures during gigs to some notoriously confrontational interviews. In short, there was a certain desperately image-conscious, attention-seeking and controlling element covering up what seemed like a limited range of songwriting skills and a random selection of second-hand philosophies.

Adore Life turned out to be a happy surprise of a smoother, more complex and expansive record. It wasn’t exactly revolutionary but it’s musical reference points were much wider. It felt more sparse and at the same time more engaging. But to achieve this they had to do away with some of that wiry post-punk intensity, which is their raison d’être. It’s what they are and their essence is live shows. Which is why I chose to give Savages another chance. Or at least give myself an opportunity to discover why they’re regarded as one of the best live bands in the country and how their new album translated into a live setting. So back to that Monday night…

To add to the sense of danger and tension, Savages appeared on stage a little later than scheduled. Their sharp dark-clad image complemented by monochrome lighting heralded an urgent and brooding presence. ‘Sad Person’, not an obvious set opener, didn’t quite hit the nerve but soon they grabbed the crowd’s attention. Jehnny Beth is a polished performer. Attacking and retreating like a panther, she lunged forward and pulled back, leaping across the stage with a coiled tension in her icy stare. There was no doubt she meant every word. “This one is for the ladies,” she said suddenly, before launching into the psychotic mantra of ’She Will’. It was intense, super sexy, aggressive and confrontational; in other words, it was Savages at their best. 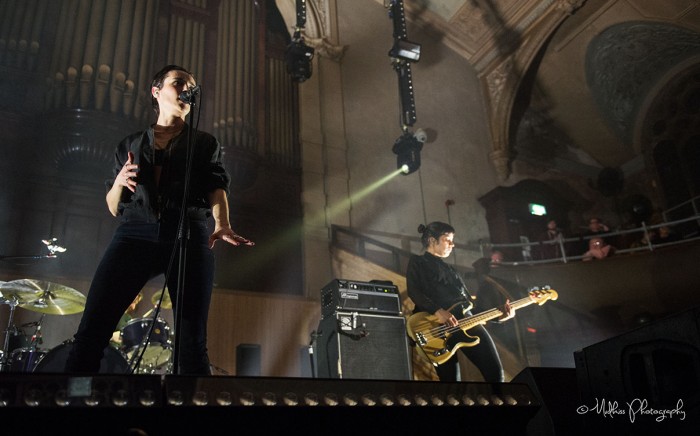 Even though conceptually the band were treading the same ground of binary oppositions (good/evil, darkness/light) and maximalist principles ( “If you don’t love me / You don’t love anybody”), looking at the moshpit in the centre there was no denial the band’s energy and conviction clearly worked in the context of their new material. ‘Evil’’s disco beat sounded compelling. The recent single ‘Answer’ was impressively poignant and violently tense. Audience talk was minimal: a few declarations of love for Manchester, one or two snappy song introductions and a somewhat confusing explanation (an audience member fainting) of their sudden interruption of ‘Husbands’, a frenetic show of ecstasy and terror that’s still their best song.

And they sure know how to work the crowd! Leaving their recent big single ‘TIWYG’ to the tail end of the set, Jehnny launched herself crawling and walking atop the rapturous audience, powered by Ayse Hassan’s fierce baseline. Just to emphasise the full blooded drama of the show, the light cast a giant shadow of Jehnny across the walls and ceiling of the former house of God. It was a masterstroke, the visionary culmination of their show. ‘Adore’, the opening track of the new album, brought the entire audience to their feet in a closing standing ovation, which also somehow made the final number, ‘Fuckers’, feel somewhat unnecessary, like err… an encore of a band who don’t do encores. 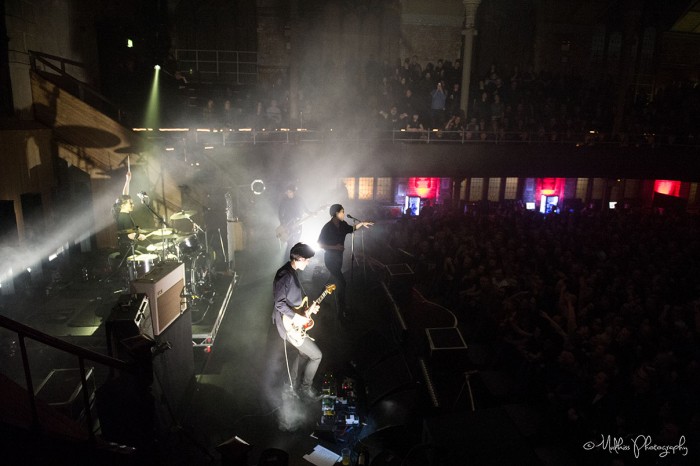 It was an impressive show but it didn’t convert me into a fan. For starters, it was hard to avoid the ever-present suspicion that at the end of the day Savages are simply not interesting enough. Ironically, seeing their supporting band Bo Ningen made these thoughts more pronounced. Genuinely weird, wild and sonically intoxicating, their set was a gender and genre defying spectacle. It’s sheer live-giving force was not there to control and make you do things. It was a feral, wondrous natural force.

Savages, on the other hand, are all about power and control. They don’t ask you, try to seduce or bedazzle you, they force you to listen. And it all feels ruthlessly, greedy premeditated: down to the last millisecond of darkness/light, the minute nuance of each gesture and each note. What’s more, their goth inspired aesthetic and punk sensibilities channel their rage into artful pretensions and pseudo-political manifestos rather than the joyful Dionysian chaos that could add some much-needed warmth and colour to their image.

First we were told to silence ourselves and now we are commanded to adore life. There is something very literal and very direct about Savages which could be either appealing or off-putting, depending who’s listening. I wanted to like them (perhaps to love them!) but deep down I knew it was going to be a struggle. They may be raising the questions but I’m uncertain they’re the answer.

For more information about Savages and to buy ‘Adore Life’ visit https://savagesband.com. They can also be located on Facebook and Twitter.