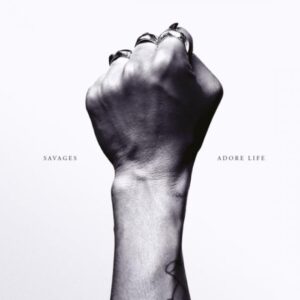 In this week of pop culture tragedy and redefinition it seems like the future thrust of pop and what it can mean and what it can do has come to a grinding halt. Post Bowie there has been talk that the only rock stars are 70 years old and the future has ground to a halt.

This is a narrow point of view. And if the nay sayers want proof that the culture still burns with intensity, excitement and dark imaginative thrills then Savages have stepped up to the mark with Adore Life – the first major release of this year and a 10/10 album that brims with a thrilling and intoxicating musical invention and stunning confessional lyrics.

The album drips sex and love – but not pop sex and love – the shiny sex and love of the mainstream. This is the dark and thrilling side of sex and love from the fuck boredom of  I Need Something New to the barrier and taboo breaking slow burn of Mechanics. This is the sex and love as the ultimate human obsession, the core of being the heart and soul of all great art and pop music dealt with a brilliant and poetic honesty by Jehny’s Beth’s lyrics and the matching music that is taut and electric when dealing with the powerful intoxicant of love and lust and sex and life.

This is  the album that we need right now.

For all Bowie’s genius we can’t get trapped in the full stop of the past.

We have to keep moving.

This is the right time for Savages album. We need redemption and we need a future to believe in. Bowie would have loved Savages. He was hip enough to the end to know what was twitching in pop culture. Unlike many others  who believe that the game is over Bowie himself was cheering along the cutting edge and the thrilling. He would have loved this album.

Savages burst of the scene a few years ago. A neo gothic punk thrill that put all the sex, style and dark subversion back into the form without ever being part of it. Of course you could hear echoes of the wonderful Bauhaus/Joy Division/Siouxsie in there but that is not a comparison as Savages somehow had created their own space in the cluttered back catalogue with their own sense of restless adventure that gave their music a different edge and made them stand out from the madding crowd.

Plenty of people have ploughed this post punk furrow but Savages made it sound so urgent and modern and forward thinking. They made it sound like it was theres. They broke out of the same micro influences and brought their own blood into the mix. Even then with their brilliant debut, Silence Yourself, you knew there was enough intelligence and quiet determination to move on and keep their creative edge.

Their debut album was a thrilling various dark ride around the city’s darksides – there was an urgency and a thrilling danger about the record that was reflected in the live performance with Beth hypnotic as an intense and charismatic figure with the band delivering perfection with that wonderful pounding rhythm section and Gemma Thompson’s slashing guitars that created an electric and atmospheric soundscape. the musicianship was brilliant and the delivery was always razor sharp and the intensity and power they delivered was a magical spell.

They became the coolest band in the world but rarely for that accolade they were also one of the best bands in the world. The only problem was where to go next. The smart thing would have been to knock all the rough edges off and go pop like generations of edgy musicians have done before but what is pop in 2016? Bumping into band members around London you would hear talk of this pop thing but at some point they must have realised that they were a type of pop just as they were. They were already dealing in the mystical art and just relaxed into being themselves and deliver that rarest of beasts – a follow up album that trumps their debut with darker and even more vicariously thrilling songs that drip with melody and emotional skree.

Adore Life retains an intensity but has the added looseness of a band who know themselves  a bit better but all that touring and time spent on the roller coaster have made Savages sound more comfortable with eachother and they fully explore the nuances and atmospherics of their sound. Mechanics has the fractured guitar and atmospherics that we love Savages for and that dark smouldering atmospheric that is always so addictive, that same kind of other worldly brooding darkness that swirled around the mighty Joy Division but transposed into a more difficult decade.

The album builds towards the classic spook rush of  T.I.W.Y.G which stands for ‘This is what you get when you mess with love’ – a core phrase that captures the seething emotions that have helped to create the dark art on this stunning album.