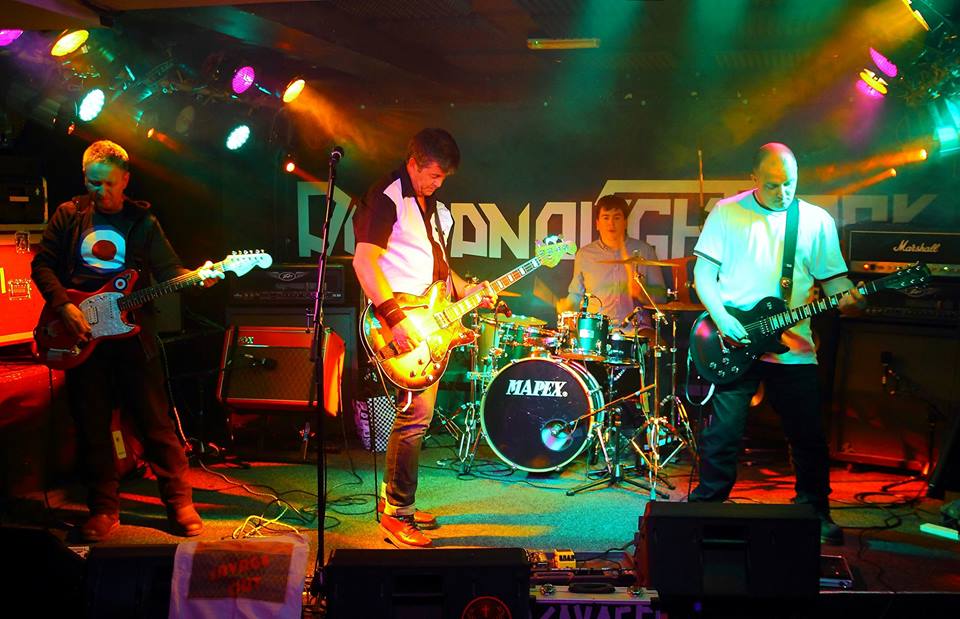 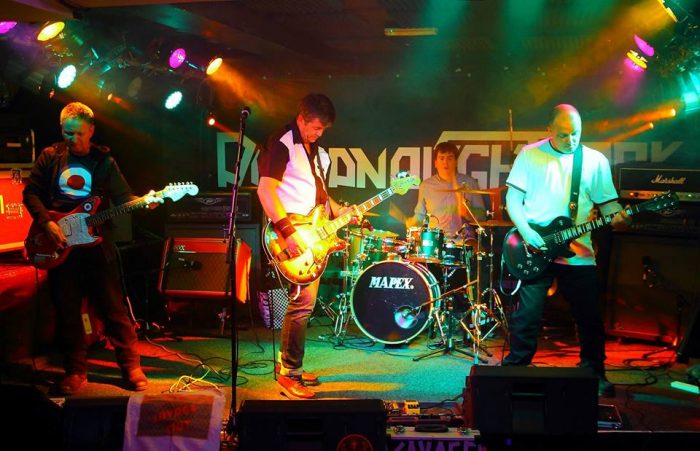 Previously worked with Hextasy (an MC); Shug O’Neil (an actor); Bobby Deans (singer song writer) and a school choir Savage Cut write their own songs, and offer them to others to put their spin on it. Their first two tracks were released on Cassette in USA by Custom Made Records after only 3 months as a band.

Then they have contributed a track to a CMM compilation CD. TBTCI records (Brazil) asked Savage Cut to provide a cover version for a Fugazi tribute album, which was released in August. Savage Cut released a split vinyl single with Greek band New Zero God on New Savage Records, and plan more releases. Sophie Luchinsky (Louder Than War) talked to John Innes from Savage Cut.

“Louder Than War: Why did you decide to start a band? Which bands you played before?”

“John Innes: We started in April 2015. We were all at a loose end. My previous band had broken up, Liam was dipping in and out between bands and his solo material, and Brian had been writing at home, but hadn’t been in a band for some time. Gaz was a staunch supporter of the local scene, and had never been in a band before. I got in touch with Brian through a mutual friend, and we arrange a jam. Liam volunteered to play drums. The first practice was pretty amazing, and we more or less had two tracks written that night. We asked if Gaz a few weeks later, and it all just seemed natural and comfortable. I had been in The Mystery Girls and the short lived Autograph Asylum, Liam had been in Penfold and doing his own solo material.”

“Louder Than War: Could you please tell me about your new album?”

“John Innes: We are still working on the last few tracks before we release an album, but most of the tracks available on line will be on it. It was never the plan to make albums, rather than simply release the songs as we finished them. We didn’t intend to play live shows either, but, rather embarrassingly, people kept asking, so we bowed to our egos being soothed and got on with it! We want the album to showcase what we are about – that diversity wins over playing variations of the same tune/style of music dictated by genre. That sounds a bit pompous, and fair play to bands who play to a ‘genre’, it’s just not something that is important or attractive to us.”

“Louder Than War: Who does write music in your band?”

“John Innes: We write songs together. Usually Brian or me will have a riff that develops when we start jamming. Liam will change the tempo, or groove so that maybe a straight ahead rock riff morphs into something more akin to a dance vibe! Gaz adds a bit of ‘oomph’ between the bass and Brian’s lead. Early on we decided not to have a ‘singer’, so we used samples on the first few tracks and they worked really well (the first two were picked up by a label in USA and released on cassette!). We did a radio interview with local legend Andy Gee, where we asked for other artists to get in touch if they fancied contributing. We had fancied getting a rapper involved, and luckily Hextasy got in touch and so the collaboration side took off. We like to demo tunes and get others to add their own spin on it. Again it seems to be working.”

“Louder Than War: How many tracks have you released before?”

“John Innes: We have 9 tracks available on line – free to download. We have sold out of our cassette single, and have just released a vinyl record, where we teamed up with Greek band New Zero God. We formed New Savage Records, and are sketching out plans for further releases in the coming year.”

“Louder Than War: Could you tell me about your songs, their meaning and the main idea of the albums?”

“John Innes: The songs mean different things to us as the process develops. The dynamic shifts from the original idea to the rough demo stage, and when the collaboration takes over, it often becomes something completely different. For example Monument started as a simple looped riff, but when the ideas from Boghall Primary School Choir (average age 10years old!!) came back, it changed from a soundscape to a discourse on the displacement of Original Americans! The whole idea of the band/album is to break down stereotype and not to rely on pandering to what we think an audience wants.”

“Louder Than War: Tell me please about your single”

“John Innes: The single came about very quickly. I have been in touch with Mike for some time – he kindly played our songs on his radio show. I really liked New Zero God, and bought their records. The idea came from somewhere to do a split single, so that’s what we did. No egos or procrastination. We split the costs, agreed the artwork and the process was fairly easy. We had been finishing Madhouse Magical with Bobby Deans, and decided that that would be our ‘side’. New Zero God had just released an album, so recorded Redemption specifically for the single.”

“Louder Than War: Could you tell about the most definitive songs? What did you mean by them?”

“John Innes: We are pleased with all of the songs that are on line. I love Ragin’ on a personal level, but I think the one that means most to us all is Konsul Miklan. The music is pretty good, and is our set closer, when we can go a bit daft and extra loud! The song includes extracts from a 1918 speech by Scottish Socialist John MacLean, who was made Russian Consul by Lenin. Our friend Shug O’Neill (formerly of punk legends Cock Sparrer) was playing the part of MacLean in a play in Glasgow, and kindly recorded the speech for the track. The track worked fantastically well, and Shug graciously came to a gig and delivered a blistering performance of the song. Sadly he passed away just a few weeks later, but we still use his voice, so he continues to inspire us.”

“Louder Than War: How would you call your style of music? Why?”

“John Innes: We are obviously guitar based, I suppose post rock, or post punk would describe us best, but we don’t feel obliged to sit in a box. We all like to make a noise, so the louder the better!”

“Louder Than War: Could you please tell more about bands that influenced you? What you think about them?”

“John Innes: Mogwai are certainly my main influence. They do their thing, and get on with it without posing or demanding adoration. The Fall are another uncompromising, belligerent group that inspire. Nine Inch Nails, Killing Joke, Arab Strap…we could go on, but I suppose the link is that they are bands who don’t compromise for the sake of trying to please all of the people all of the time.”

“Louder Than War: Tell please about gigs you played live”

“John Innes: We have spent too many years playing to miniscule crowds, so now make sure that there is a good chance that there will be an audience, and that we won’t feel that we have been taken advantage of. So many venues in Scotland now more or less force a band to pay for the privilege. Thankfully, we have steered clear and would say that places like The Dreadnought (Scotland’s oldest Rock Club); the legendary Sneaky Pete’s in Edinburgh and Ivory Blacks in Glasgow have been our highlight shows.”

“Louder Than War: What’s coming up next for Savage Cut?”

“John Innes: We have some writing and recording to do. We will be hitting the studio at Live Rehearsals with producer Robin Young over the next few weeks, band will then be getting our next two collaborators over to do the vocals. Both tracks will feature female voices – something that we gave been trying to do for months now. Both are completely different, so we are very excited by the prospect.”

“Louder Than War: Are you planning to release new album, singles?”

“John Innes: We are talking to Mike of New Zero God about the way forward for New Savage Records, and have a few ideas at the very early planning stage. Again, it is an exciting period for us, and we don’t intend to rest on our laurels!”

“Louder Than War: When are your next gigs?”

“John Innes: We have a show on 27th October in Ivory Blacks in Glasgow as part of a series of gigs being put on by the worthy music cooperative New Hellfire Club, who have been brilliant in supporting the Scottish scene over the years.”

“Louder Than War: Thank you”