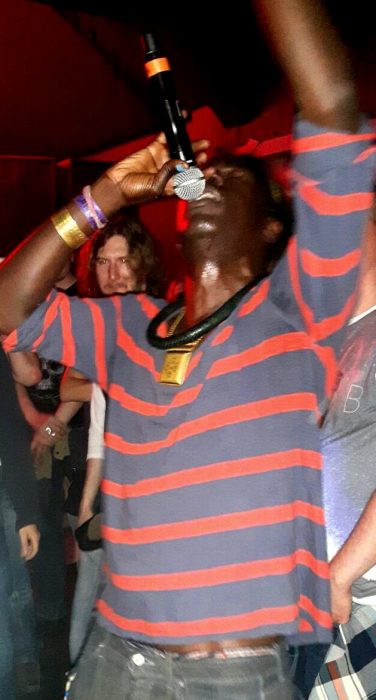 Saul Williams tears through Birmingham on the day when everything went wrong. Louder Than War’s Christopher Lloyd reviews.

Saul Williams skulks around the back of the venue looking equally like the coolest person in Birmingham tonight, but equally the most pissed off. Saul is here to promote his latest album Martyr Loser King, a multi-media affair telling the tale of a fictional town in the Great Lakes regions where a hacker community is living within a village they’ve created from broken computer parts, whilst questioning the nature of power and where that power lies between the analogue structure of technology and the digitisation of power, from the mines providing the basic technological components such as Colton to the formation of the digital hacker profile of the albums title.

It’s a stunning album with stunning imagery to compliment its live incarnation, yet it is indeed a fucked up day. Not only has Britain decided to tear itself apart but so has the software required for the visual element of for the live set.

Saul Williams eventually takes the stage looking furious. He kicks down the big, now blank screen, and finds a set of stepladders from the side of stage which also go flying. The air is somewhat tense.

Album opener ‘Groundwork’ kicks in and Saul leaps into the audience, furiously spitting out the first half of the Martyr Loser King album right amongst the crowd. The lyrics are projected with so much heart and passion that people stand around mouth agape. The music, trance-like Burundi rhythms and swirling electronic strings transform what was a slightly nervous audience into something that what I can only imagine feels like some form of tribal community dance. It’s euphoric, relevant and extraordinarily involving.

Saul heads back to the stage for the second half, which covers pretty much the rest of Martyr Loser King, before ending with a couple of classics, ‘Grippo’ and ‘List of Demands’, where Saul is joined onstage by his son who joins in on the choruses. It’s a wonderful thing to see both Father and Son so enraptured in the moment, and a perfect way to end one of those very rare gigs that can change your attitude and thinking from one of fear and doubt, through catharsis and leave you feeling positive, recharged and ready to take on the world.