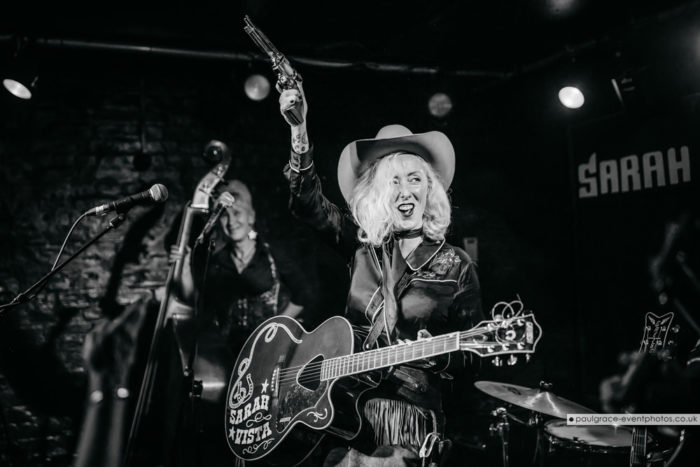 Three costume changes, two sets, one intermission and a loud revolver. It’s not the usual fodder one comes across in a dark Camden music venue. But Sarah Vista is not your usual artist.

Fans of The Blues Brothers film will fondly remember the iconic seen where the eponymous band attempts to blag a gig at a bar that is decidedly good ole boy friendly. Upon asking the staff what type of music they specialise in, Jake and Elwood Blues are promptly informed that they offer “both kinds – Country AND Western”. Similarly, Sarah Vista’s record launch performance at The Black Heart offers two separate sets with the same genre split.  Which, it just so happens, is how the sides of her latest release is divided when you acquire the vinyl version.

Before a capacity crowd, the country part of the show begins in earnest. Vista, brandishing a bright red Gretsch acoustic guitar with her name emblazoned on it, fronts the quartet. Comprised of an upright bass player, drummer and a talented man who divides his duties between lap-steel and guitar – the foursome ooze country cool. They’ve got the right threads and sound to immediately transport the audience to the Grand Ole Opry. In terms of the material on offer, however, Vista offers an edge to the proceedings that is unmistakably British. This is a good thing. Whereas the Australian upbringing of modern country superstar Keith Urban is only apparent when the singer and guitarist is interviewed, Vista’s dark humour and dry wit infuses the genre with an infectious and irresistible blend of American and British. During the western set, the arrangements take a darker turn. Guitarist Jeff Mead, donning a double neck 6 String/Baritone Guitar summons the type of sounds for which Ennio Morricone would fill his pen and order new scoresheets for. 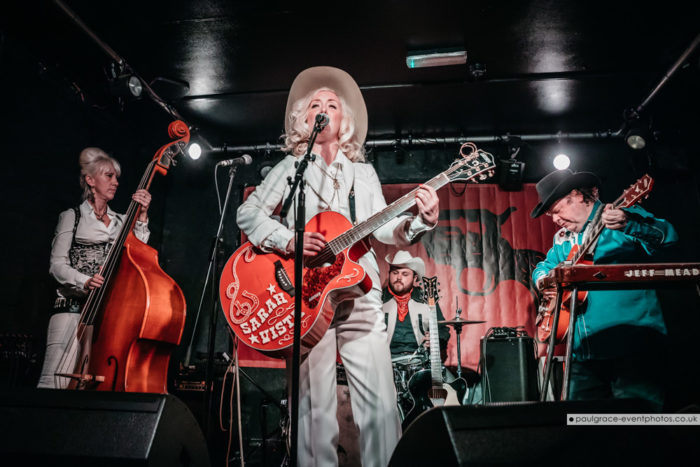 Both sets are positively cinematic in sound and delivery. And, while I sense that Vista yearns for a feel that conjures up Clint Eastwood circa The Good, The Bad & The Ugly – I hear something more varied and quirky. If the Mancunian director Michael Lee were to explore ‘the western’ as his next project, Sarah Vista’s music would be the perfect fit. As much of Vista’s material is plot driven, there’s more than enough theatrical material on the two sides of Vista’s debut release to base a flick or three around. In fact, many of her song titles sound like films in their own right – A Day Late and a Dollar Short, Madame Moustache, Get Three Coffins Ready and Hell At High Noon are but four examples.

Recreating the lush sonic landscapes of Killing Fever live is not an easy task and, despite some unwanted feedback creeping through the PA, the band does a sterling job bringing the album to life. Vista’s voice cuts through the mix like a gunshot down a well. In addition, Jeff ‘The Henchman’ Meade’s effortless transition between instruments is a sight to behold and his lap steel solo on Now You’re Sleeping, in particular, is sublime. Drummer Frankie Riedel, who is apparently on enough painkillers to flatten a rhino due to back problems, provides solidity and tasteful finesse to the band’s backbone. In addition, the dynamic upright bass playing of Emma ‘The Sheriff’ Goss anchors the band’s sound with groove, restraint and an often slappingly vibrant delivery throughout. Portions of the set are also augmented admirably by a guest harmonica player Charlie Hangdog and a sombrero wearing percussionist. The latter, Adie Hardy, is introduced as ‘the maestro’ just prior to the start the band’s second set. A fitting nickname as the bongo basher, who resembles a young Salvador Dali, is the highly talented producer of Vista’s debut album. 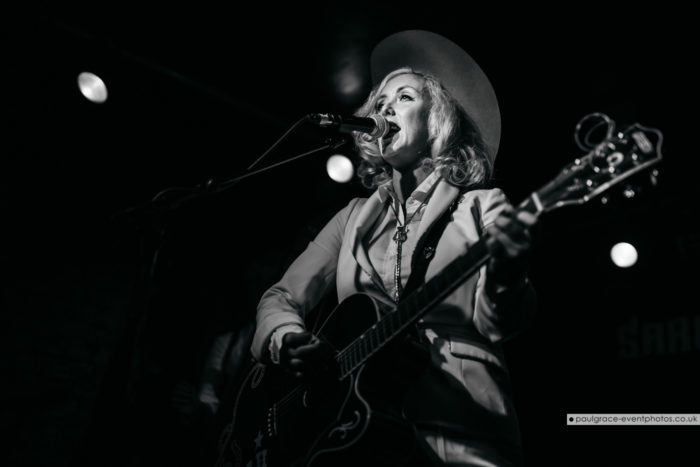 You Know You Lie, a track which doesn’t feature on the latest release, is an unexpected highlight of the set. Vista informs the crowd that this forthcoming release was recorded at the legendary Sun Studios in Memphis. The rich musical history of that iconic facility must have rubbed off on the band as the delivery of this emotive ditty is otherworldly and awash with rootsy country cool. Before closing the western set with I Wish You Hell, Vista thanks all her supporters for helping to make both the album and this inspirational launch gig a reality.

Encores are a weird entity at gigs. The notion of an artist or band employing an internal ‘applause-o-meter’ to gauge the suitability of returning to the stage is an odd concept when you examine it closely. It’s particularly perplexing when the more popular offerings from a group’s canon have been withheld specifically for this purpose. With Sarah Vista, however, an encore is a conduit for adding more drama and pathos to the event. And another costume change. Adopting the look of a mourning window, the singer’s black veil is complemented by an ebony-coloured Gretsch acoustic guitar. And loud gunfire from the songstress herself. Theatricality is strong in Vista. As are her songs and the tightness of the band. Michael Lee needs to oversee the reboot of the spaghetti western ASAP.