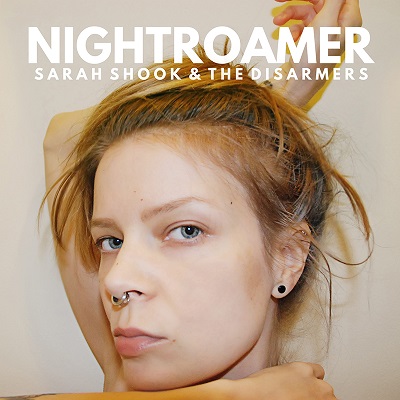 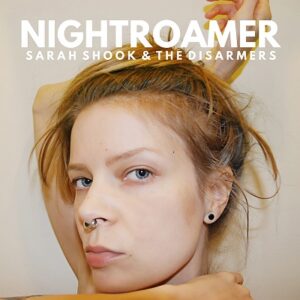 Sarah Shook & The Disarmers return with Nightroamer, their follow-up to 2018’s Years, to expand on their biting yet bruised Americana with an injection of defiance.

Occasionally a record comes along whose lyrics twist into your psyche through their wordplay and imagery. Four years ago, on the wonderful twanging breakup song Good As Gold, Sarah Shook & The Disarmers did just that. It showcased someone gaining strength in personal adversity and planted Shook and her band more firmly on the international stage. Four years later, they’re back with an album that maintains their identity while simultaneously feeling much more expansive than its predecessor. It has taken some time to see the light of day, not only likely due to the pandemic, but it also suffered from being caught up and put back by the furore surrounding and subsequent closing down of their old label Bloodshot. Thankfully, the Country/Americana label Thirty Tigers stepped in and signed the band last year and they are now able to bring us Nightroamer.

The album eases in with the dreamy Somebody Else, a wisping slide guitar flowing gently beneath Shook’s unmistakable voice, still straddling the space between defiance and defeat, the lyrics immediately laying troubles bare again. “You weaken me till I can barely stand / Keep hurting me till I quit hurting myself.” Wounds are opened, cleansed and, hopefully, healed through cathartic processes in the light of day. From that opening, the band shift gears up a notch and into Been Lovin’ You, a great organ line replacing in parts and complementing in others that staple slide guitar as the band drive on, the perfect vehicle for Shook.

The title track, which sits in the middle sees a change in the narrative. “One foot in front of the other…one step after another.” It’s the sound of someone standing once again to rise to a new day and the fresh challenges. It’s preceded, however, by one of the highlights of the album, the barnstorming No Mistakes, the song that probably arches back more than others here to their previous work. The trio of songs that sit at the album’s midpoint, completed by It Doesn’t Change Anything, embody perfectly that change in tack, a reaffirmation of inner strength.

When they break from the Americana mould they find a new confidence to delve into a poppier territory. It works to great effect on I Got This, also bringing a new level of optimism to the record. “The best revenge is living well.” Shook sings. An anthem to taking back personal control that works wonderfully in the second half of the album before she falls blissfully into Believer, the sparse music providing just enough support for some beautiful vocals. They close out the album with one final act of reaffirmation on the fantastic Talkin’ To Myself, one of the best tracks on the record, which brings all the ingredients together one last time.

Produced by long-time Dwight Yoakam producer and guitar player Pete Anderson, Nightroamer is a triumphant return for Sarah Shook & The Disarmers and just may be the crossover album that they need to reach the audience that they truly deserve.