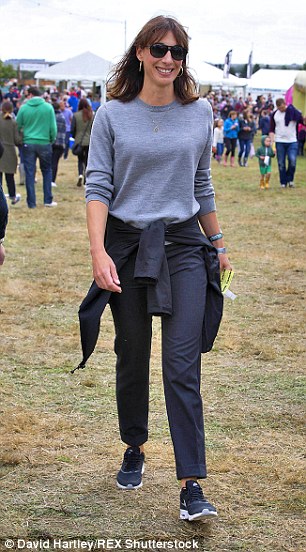 The Daily Mail has been scratching its head over the ‘bohemian tastes’ over David Cameron’s wife Samantha.

Seems ‘Samcam’ likes to listen to 6music and is a big fan of War On Drugs and was friends of Tricky at University. Of course it would be pious to deny the super rich Mrs. Cameron the right to listen to any music she wants, that should be very snobbish – money does not get in the way of music and she is probably more sincere about her music taste than her husband is about saving the NHS.

The Daily Mail is faking shock at her interest in Polica.

‘She rarely misses a chance to demonstrate her ‘cool’ credentials.
And this week Samantha Cameron was at it again, revealing her love of alternative group Poliça.
But their brand of psychedelic rock conjures up a world a far cry from her life in Downing Street and the Cotswolds.
The American band – whose name roughly translates as ‘policy’ in Polish – are inspired by a radical feminist who described pregnancy as ‘barbaric’, and their songs feature violent imagery.’

It would also be bit pissy to question whether someone from the right should be allowed to like music from the left (if all alternative music is actually even from the left these days).

The question it really begs is just what is alternative music is these days.

Decades ago it would have been hard to imagine a Prime Minister’s wife getting down with Crass or listening to the alternative music of the punk and post punk period but the meaning of the word has drifted so far now that the cosy knitwear of War On Drugs or the 6music daytime playlist is somehow considered alternative music- a comfy lifestyle choice with music that is slightly to the left of Coldplay with all spikiness removed.

Alternative is now a handy marketing to term to soundtrack the well healed in million pounds homes is the true definition of modern alternative music. Not so much Samantha Cameron’s fault- she can like what she wants but is it not time to redefine just what alternative music actually is?