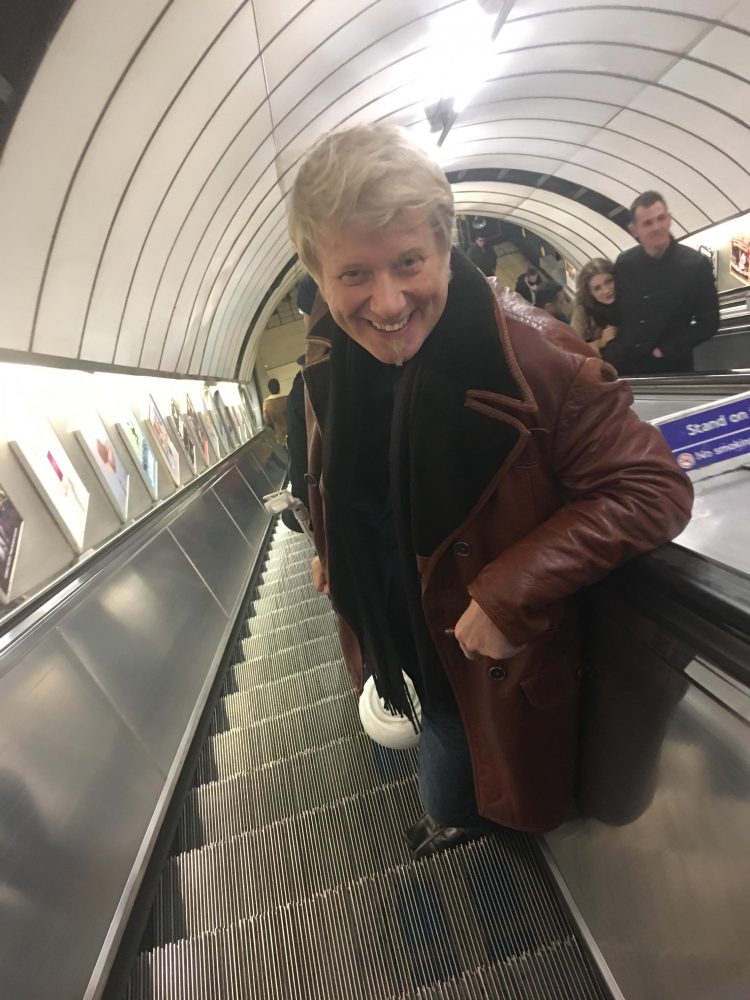 Standing above the clouds at 6’3″, blonde and beautiful, World5’s, salaciously, tantalizing James Bondesque frontman Sam Stevens reaches for the stars, but deserves the entire universe. Working on releasing a brand new album via Spectra Music Group, with adult rockers World5, Sam Stevens, a multi-instrumentalist, songwriter and producer, who also flirts with various solo projects, that promise a massive splash in the U.K. and US music scene momentarily. 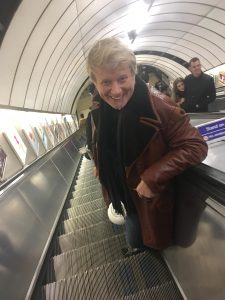 Calling Nottingham England his home base, and I’m sure a friend of Robin-Hood, Stevens records with a band that stretches across numerous continents, several language barriers, and multi-cultural facets including: Steffen Goeres on guitar and trumpet, from New Zealand, drummer Raimund Breitfeld, based in Sweden, however originally from Germany, Jimmy Olsson on bass, Joe Gavito on guitars and Sam showcasing lead vocals out of the U.K. Several of the members have never even met in person, but instead skype their music together and create genre defying hits such as “I Won’t Let You Down”.

I’ve interviewed Sam before, however actually meeting him in person was a globally unique and awesome experience inspiring another conversation regarding his solo efforts. He has currently written a mesmerizing new song, filled with passion and sensibility entitled, “My Kind of Crazy”and flirting with the prospect of unleashing it to the world.  Although the song is painted with the same brush it is ablaze with such a powerfully fiery romance that it might be a possible candidate for several remixes, although that isn’t confirmed at the moment.

“One thing I’ve always tried to do is care for those around me and put smiles on people’s faces. When you strip away money or status and possessions, which are transient, what are we left with?..I think empathy and connection with people is everything, probably the reason I’m a musician”….Sam Stevens

A genuine soul, not afraid to share his sensitivity, his compassion, and his love for the human race, Sam is able to project the meanings of his songs effortlessly to the world. Like the eye of an exhilarating tempest you’ll be swept away by his candor and truth, and like a ravishingly crimson sunset you’ll be drawn to his musical sparkle and intimacy…….and furthermore he comes with a mysterious intrigue that is branding him the James Bond of rock….

Louder Than War: In the midst of a dimly lit hotel lobby surrounded by the mystique of the Camden Market, we became seated with a cocktail in hand and began an intrinsic conversation, occasionally separated by a common language, however managing to keep it honest…..and filled with eternal  laughter…..

So yes, I drink far too much…. but I only drink good stuff.

I have a funny story about drinking…I really like Brandy. Probably in the early 80’s, University time, I went to Paris and I was drinking Ricard. It’s a clear liquid and you pour water in it and it goes white like milk. Being an art student I was drinking Ricard with water so it turned into milk and smoking Gauloises and Gitanes, French cigarettes. It was the cool thing to do. I went over there after the University degree to study in Paris for eight months.

A fast learner at drinking Ricard…..yeah I certainly was.

I did a degree over here, the University of East Anglia, UEA they call it, and then went to Paris. I stayed in the Latin Quarter in Paris, I was just loafing around with French boys and girls. We were in one of those warehouse conversions with the ceiling to floor windows and gallery bedrooms….wine bottles everywhere. Big floor to ceiling brick walls that we just put canvases on and we would just do one over the other. It’s a bit like when you see graffiti on the side of the train. Somebody does a piece of art and it’s amazing, and then somebody else does another piece of a lot over the top, and that’s really what the two end walls were like.

So then when did you start doing music?

I’ve always been a musician. My dad was a jazz guitarist. Did I tell you my earliest music memory? So my parents split up when I was really young, and I refer to my stepdad as my dad now, but my real dad played jazz guitar and he took me to Ronnie Scott when I was eight. I hadn’t seen him for a while, he used to turn up like a knight in shining armor. So he took me to Ronnie Scott’s and I had just started playing a sort of chunky acoustic guitar. He got me to sit on the side of the stage. I was still kind of tall then. There was some big American guy playing keyboards. It was Oscar Peterson, he used to play with Miles Davis. He was an amazing jazz, blues keyboard player. I was standing by the edge of the stage and he said, ” Hey kid, can you play two notes”? So I played two notes when I was eight years old and didn’t know what I was doing, and he rubbed my hair away and said “Well done son”.

Fast forward to your teenage years…..that picture of you where you were so pretty, you looked like Madonna and Marilyn’s illegitimate music child…..

You know when you were talking about creating characters? I think David Bowie had an incredible influence on me, and lots of my friends because it wasn’t necessarily the music, it wasn’t necessarily the things he did. He said that it was ok to be who you are, and he also said, that if you don’t know who you are, it’s ok to make who you are. Which was a really powerful thing for me and my friend called Brian, who is no longer with us unfortunately. We used to just come up with ideas about how to dress and all that sort of stuff. At 11 years of age I was already 6 feet tall. I was sort of hunched over because I was really embarrassed about being so tall. My voice went from singing like an angel to this baritone voice at age 11. The rest were really squeaky and short and I was just a lamppost of a guy who had a really deep voice. Our home was a loving home but we didn’t have much and music used to take me away from my troubles. It probably is what Courvoisier does for me now. From listening to Strauss and Mozart and the Carpenters, and Deep Purple, The Beatles, and then being so tall with a deep voice, I think I was in my first band. Uncle Gordon taught me how to play guitar, rock chords and stuff. He took me to my first ever gig.

So you can imagine an impressionable kid who loves music….he took me to Wembley arena, a big venue and I saw “Kiss”. I hadn’t even seen a pop band and I saw  Gene Simmons spitting blood and flying around with pyrotechnics going on….so from seeing that I said, “I want to do this please” Uncle Gordon used to take me to lots of rock gigs in London.

So you were born a rocker…

Here’s a great story….I have lots of stories….my stepdad by this time my dad, he loves going fishing. So because we went night fishing he bought me a thing called a Parka, with a hood , with a bit of fur on  it,…. it’s a green thing. It was the uniform for mods. ( for those who aren’t aware, Mods and  rockers were two conflicting British youth subcultures. Both groups were perceived as wildly violent ). Mods were the precursor to punks. The rockers all dressed in leather, and the mods were smartly dressed in suits. So Led Zeppelin played in 1978, one of my early influences. Because I thought I was going to be cold I wore a mod Parka to the biggest heavy rock concert in the U.K. and I came out covered in yogurt. People were throwing stuff at me. So the sun went down, Jimmy Page was playing guitar with a violin bow, and it was amazing. Because people were throwing stuff at me, and I couldn’t  understand why, there was a big group of Hell’s Angels sitting next to me, and they said, ” leave him alone, he’s with us”. So these big hairy monsters took care of me, and they also gave me my first joint. Everyone had these luminous tubes that they would waive around. There was a guy with the really big tube and he was swinging it around and the end came off. So all of the luminous stuff came out and got all over people’s faces. So there’s me in my Parka  covered in yogurt, sitting with Hell’s Angels, stoned out of my head, and people walking around me with these Martian luminous painted faces on them…..and I was like, ” this is the best gig in the world”!

So you’ve just written one of the most amazing songs I’ve ever heard.

I want to do some strip down versions of the songs, and I want to start playing a lot, live. I’d Iove to play them with the band when we get together, but in the meantime these songs deserve to be listened to. I have a niece called Sophie and she’s a dancer. She is beautiful and she’s not arrogant, nice to children and animals. So for her 21st Birthday we all did a video for her, family and friends, and I said, “As you go through life, you will meet people that are great looking, you will meet people that are funny, people that have loads of money, you might meet powerful people with lots of influence, but as you go through life considering you’re 21, the main thing to do is find people to hang out with that are, Your Kind of Crazy. Crazy is fun with laughter, enjoying people, and having that empathy with people that like you, that is the best thing in the world. It also creates a protection in your life. Hanging out with people that are like you and think like you, creates a little emotional community, and that’s a really good thing”. My friends that I have as friends are really valuable to me. Really, really valuable to me. My family is important to me of course…I’m the one who’s always finding people and saying, ” You OK”?

All words by Eileen Shapiro. More o Eileen’s writing can be found in her author’s archive.