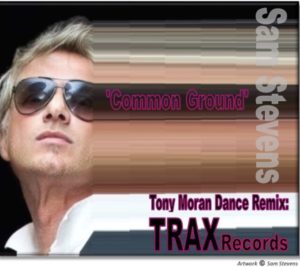 The strikingly elegant and attractive Sam Stevens presents his personal viewpoint of “Common Ground” and his hope for its message to be received and accomplished. As one of the writers of the song Sam explains the monumental importance of the artistic statement, “If our differences divide us, then our differences deprive us.”

The song features an avalanche of creativity and human sanctuary courtesy of Greenly, Polk and Stevens. Greenly has often commented on how proud he is that he was part of the creative process in the lyrical destiny of “Common Ground.” Polk designed the original music, then Stevens lent his vision and divine artistry to consummate the powerful message. In finality, the sensational DJ Tony Moran remixed the entire track and recreated its new musical essence.

Ravished by political unrest invading the stability of the great powers of the planet, coupled by the confusion bestowed upon the human race, the only thing that can bring salvation might be “Common Ground.”

The song features an avalanche of creativity and human sanctuary courtesy of the artists.

Louder Than War: What is your take on all the recent mentions of Common Ground via political leaders and giants in the entertainment field?

It appears to be a collective consciousness we’re being told by the universe .. Its a strange phenomenon that when the planet gets into difficulty and humanity needs an answer, a change in how things are that it’s the musicians, poets, creative artists and the free thinkers of the world who seem to tap into one though , one consciousness that says “there’s an answer to this pain and suffering we’re going through” and it’s certainly the case that there seem to be voices across the globe speaking exactly the same words at the same time. We felt compelled to write the song last year in answer to how terribly polarized society has become, in cases violently so, and then to hear the likes of the Queen of England, Golden Globes winner xxxx The Prime minister of the UK and so so many people in the media speak the words “we need to find some common ground” is just weird, so something much higher than some musician writing a song is going on. This is important. It’s literally like there’s a message of hope being given to everyone and some people who are tuned in are receiving the message and, like we were writing the song, feel compelled to do and say something about this.

This doesn’t feel like some trite sound byte, we’re being told something and we NEED to listen. We have broken polarized societies and we’re not thinking straight at the moment and so it feels that the universes giving us a message. The creatives are picking this up and sharing the message, a definite coming together of minds, it’s a very strange phenomenon to witness and clearly a direct ‘ask’ for people to just STOP for a moment and think more about the things that we have in common than the things that divide us.
What is your message and what is the hope for your message to be heard?

I’d like more people to tune in to the message, let this collective consciousness grow and grow and become a tangible thought that we’re losing our humanity by being polarized in our thoughts and judgments. “If you don’t believe what I do then I’m against you “. This is NOT how humanity works, it’s terribly, terribly damaging as we as people, communities relationships and society are infinitely better off when we care for each other, can find the good in each other and can on occasion agree to disagree.

“Soap Box moment”… Politicians and the purveyors of division are using media and damaging rhetoric to divide and conquer us and they’re winning. Dividing people is not only a way to control them and use them for your own ends but it’s a downward spiral that anger and division in the media then permeates into our work lives our social lives and how we connect with every individual we meet. People are becoming selfish. We desperately need to find how we connect with others. I spent a day walking around a park yesterday just insanely chatting to people. Chatting about the weather, some kids bicycle, a couple eating ice cream on a bench whilst wrapped up in winter coats, these were lovely conversations… THIS is what humanity is about, sharing stuff and not even considering what political views they have for God sake !! They’ve sold you a lie for their own political expediency and its working so we have a duty to push back. Be kind people, chat to everyone, the woman in the supermarket, the teen on a bus, the family in the restaurant. It doesn’t matter what race, religion color or creed they are. We all cry, we all laugh, we all absolutely adore out kids. We all need food warmth and LOVE, someone to share our lives wit. THIS is our common ground. An old lady falls down in the street and cuts her knees you don’t ask what religion she is before you help her up. We have a HIGHER purpose than this divisive rhetoric that we’re being fed. Ignore it, block it out and be kind to EVERYONE. Let Love Be Your Everything.

Aside from your new release what else are you planning for 2019 and beyond?

Gosh!!  Well, I  just won “UK Solo Artist of the Year” and have just signed to the incredible powerhouse of Trax Records { hi guys } and so it’s going to be an exciting year. The Dance version of Common Ground was released last week and has had great reviews. So we’re planning a follow-up. I’m also rehearsing the band ready for a US and European live tour and it’s going to be full on and amazing with the message of Common Ground front and center. I try and connect with people and there’s no better way than to get out there and play my music to people.. it connects us.

What has been the highlight of your career thus far?

I’ve had many but the time I played on stage with Prince has GOT to be the one. As a big Prince fan I went to Minneapolis and met a few of the band and there was a live music venue called Bunkers with a band called Dr Mambos Combo, fantastic band. I was invited on the stage to play guitar, and half-way through ‘just my imagination’ Prince turns up, is handed a guitar and plays a killer solo 3 feet away from me .. gives me chills just thinking about it now. I met him a few times after, amazing human being and funny as Fk.. Prince was an artist, a man that had empathy. He knew about Common Ground and could see it in everyone. It’s devastating he’s gone but his light shines on

Will there be any more material from you with similar messages?

ALL of my material has a connection and a message and so yes the theme of Common Ground not only permeates my music but also what i do in my day to day life. As far as the music is concerned tracks like “IT Works-try a little Positivity”, “See”,”Let Love Be Your Everything’”etc., are beauties all with a positive message

What has it been like working with iconic DJ Tony Moran?

Tony’s great a true gent and very talented. Mike Greenly, Gil Polk and I wrote the original full version /guitar based “Common Ground” which sounded great, definitely a Prince influence in there, and Tony heard it and said he’d like to do a dance remix. I didn’t know how that would work as Dance isn’t my first discipline, so it’s great to leave it to the experts. Tony did a rough mix, I took that back into the studio & re-did the vocals with the Daft Punk harmonies etc & sent it back to Tony to mix & master and it came out brilliantly. Totally different than the original but they have a “Common Ground” ..lol

Any last words regarding your new release?

Yeah.. listen to it, listen to other people, Life’s not Polarized and we’re better than this. Teach your children to find some “Common Ground” and let’s try and heal what’s broken.  LOVE & SMILES … Sam xx