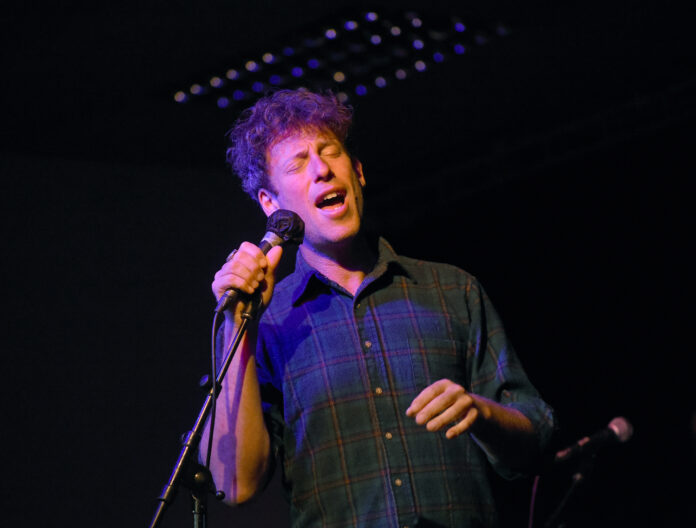 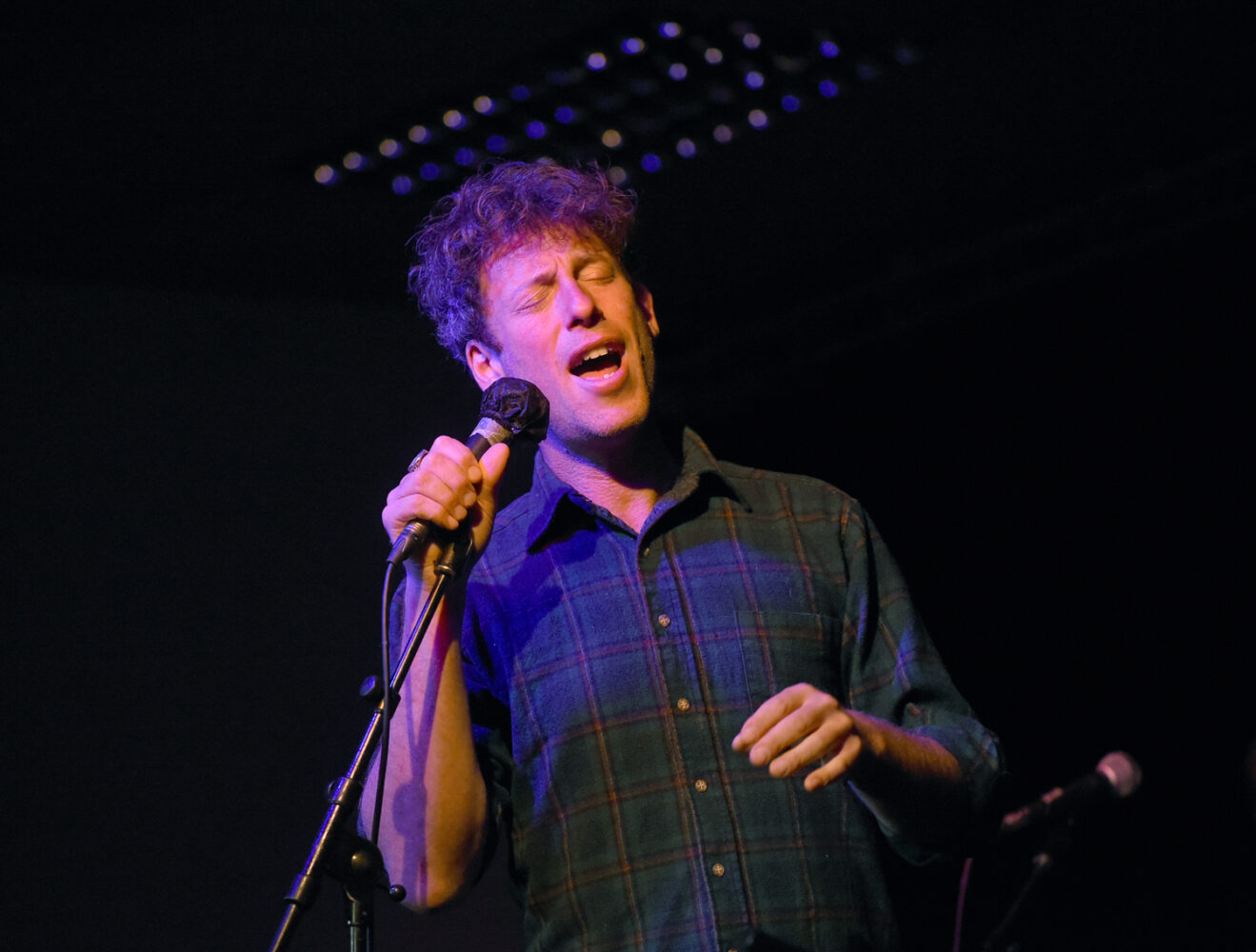 Sam Lee brings his unique brand of folk to Morecambe, performing sad songs of death, heartbreak and despair drawn from Old Wow, his collection of fresh adaptations of traditional songs themed around man’s interaction with nature and the environment.

Sam Lee is a polymath and very hard to pigeonhole. He’s released a Mercury Prize nominated album and is an active environmentalist who’s involved with Extinction Rebellion and Music Declares Emergency. Through the Nest Collective he promotes folk related events and supports emerging artists. Working with the RSPB, he’s scored an unlikely top 20 hit single with birdsong recordings. He’s acted and sung in Peaky Blinders, and written the lead song on Hollywood Fantasy, King Arthur: Legend of the Sword. Earlier this year he also published his first novel. 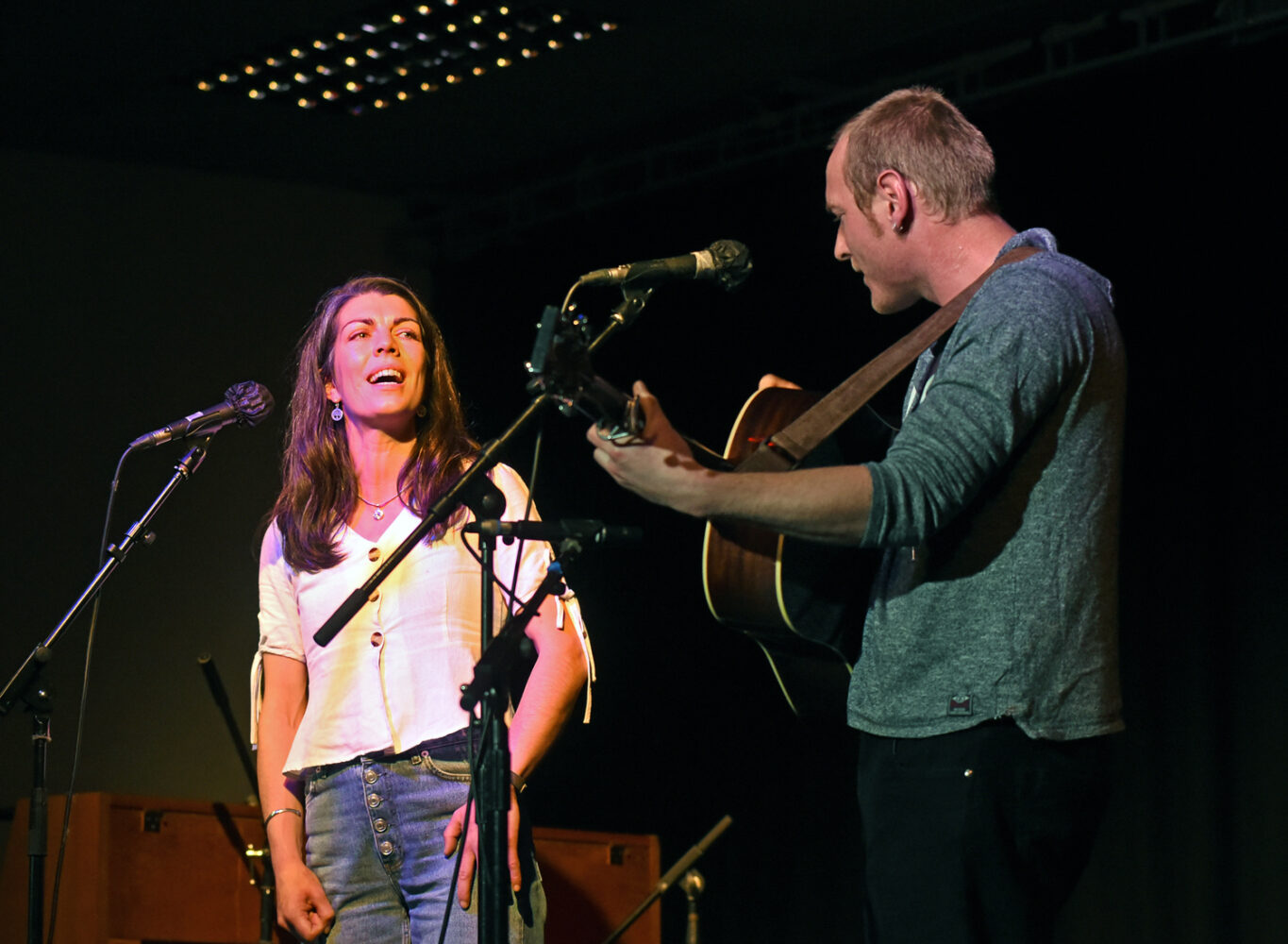 The evening opens with a selection of folk related covers by Cumbrian duo Paddy Rogan and Hannah Flynn. There’s nothing ground-breaking in their performance but they’re good at what they do. Highlights include a pleasing version of Johnny Flynn’s Water and a rousing rendition of the Christy Moore song Vive La Quita Brigada. It’s an enjoyable and well-received set.

The theme of nature, and our place within it, runs throughout the evening.  Sam and his band open with The Garden Of England. It’s adapted from, Seeds of Love, a traditional song that lyrically introduces us to The Old Wow; the enduring power of nature. Initially propelled by double bass and subtle percussion, the track builds as first piano and then soaring violin join in, the instrumentation subtly waning as the track draws to a close. Centre stage, Sam Lee cuts an imposing figure, his sonorous baritone voice making an immediate impression. As the song draws to a close he repeats its emotive refrain: “The Old Wow never wears thin.” You quickly realise just how much the natural world means to him. It’s a great start to the set. 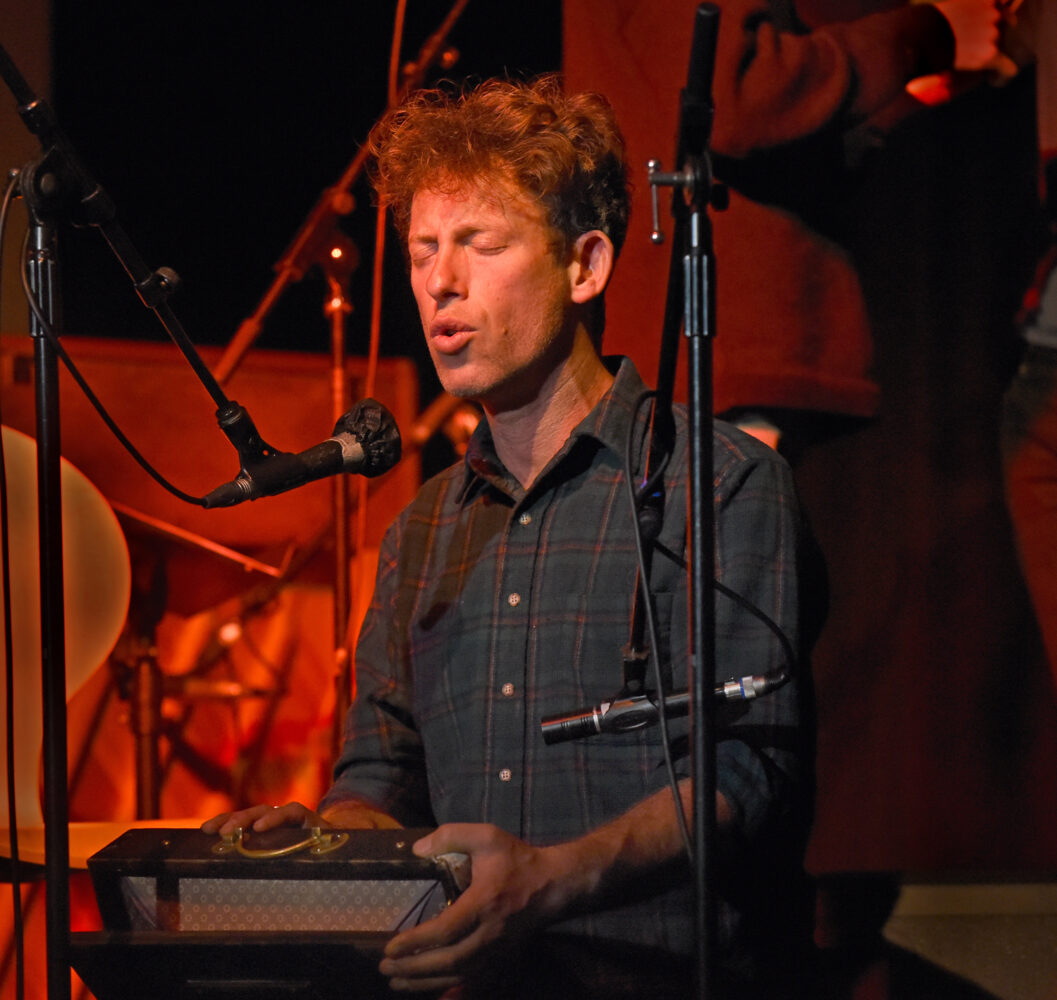 Folk favourite John Barleycorn follows soon after. The allegorical tale of the death of barley in beer production is delivered in far more traditional, subdued fashion with mournful violin as the main accompaniment. The crowd respond warmly and we hear the first hint of the audience singing.

Introducing The Moon Shines Bright as another sad song brings a ripple of appreciation in the crowd. This draws a pause, then Sam makes an admission. He prefers singing sad material. and it’s a sentiment greeted with nods of agreement from those around me. This is fortuitous when so many of tonight’s songs deal with death, heartbreak and despair. It’s another track that’s slow in pace. Sam’s voice is initially backed by piano and violin with double bass joining as the song builds to incorporate traditional song Wild Mountain Thyme.

Lay This Body Down is an unremittingly miserable and downbeat tale of graveyards, grief and burial. Beginning in a capella style, bass and percussion initially kick in before violin and piano transport us into rich gospel and slow blues territory. It’s just such a powerful delivery and, for me, one of the highlights of the night. 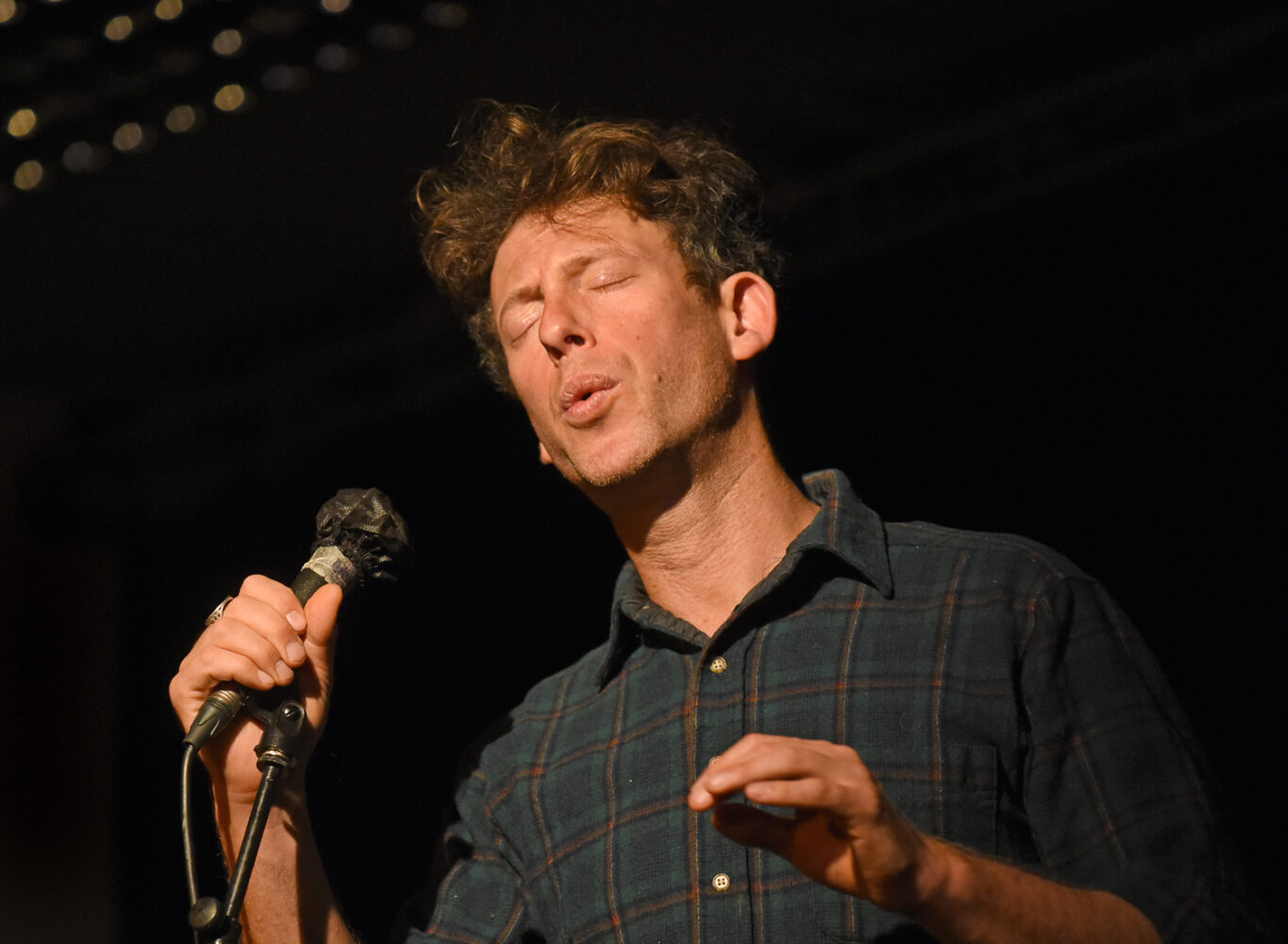 Sam’s a natural raconteur. He pauses to speak of his time spent among the Irish traveller community gathering songs. Potentially a dull catalogue of reminiscences, Sam’s charisma, voice and sincerity bring these tales to life and he uses them as a bridge to introduce a couple of older songs.

We’re returned to concerns for the natural world with Turtle Dove. Sam’s involvement with the RSPB is ongoing. He’s been recorded singing with Nightingales and works to raise awareness of declining habitats and threats to species. The aforementioned dove is heading for extinction in the UK and the song mourns its demise. His rendition is incredibly emotive. Beginning in hushed tones, it builds in intensity and we’re left feeling that Sam’s fighting a personal crusade for its survival. 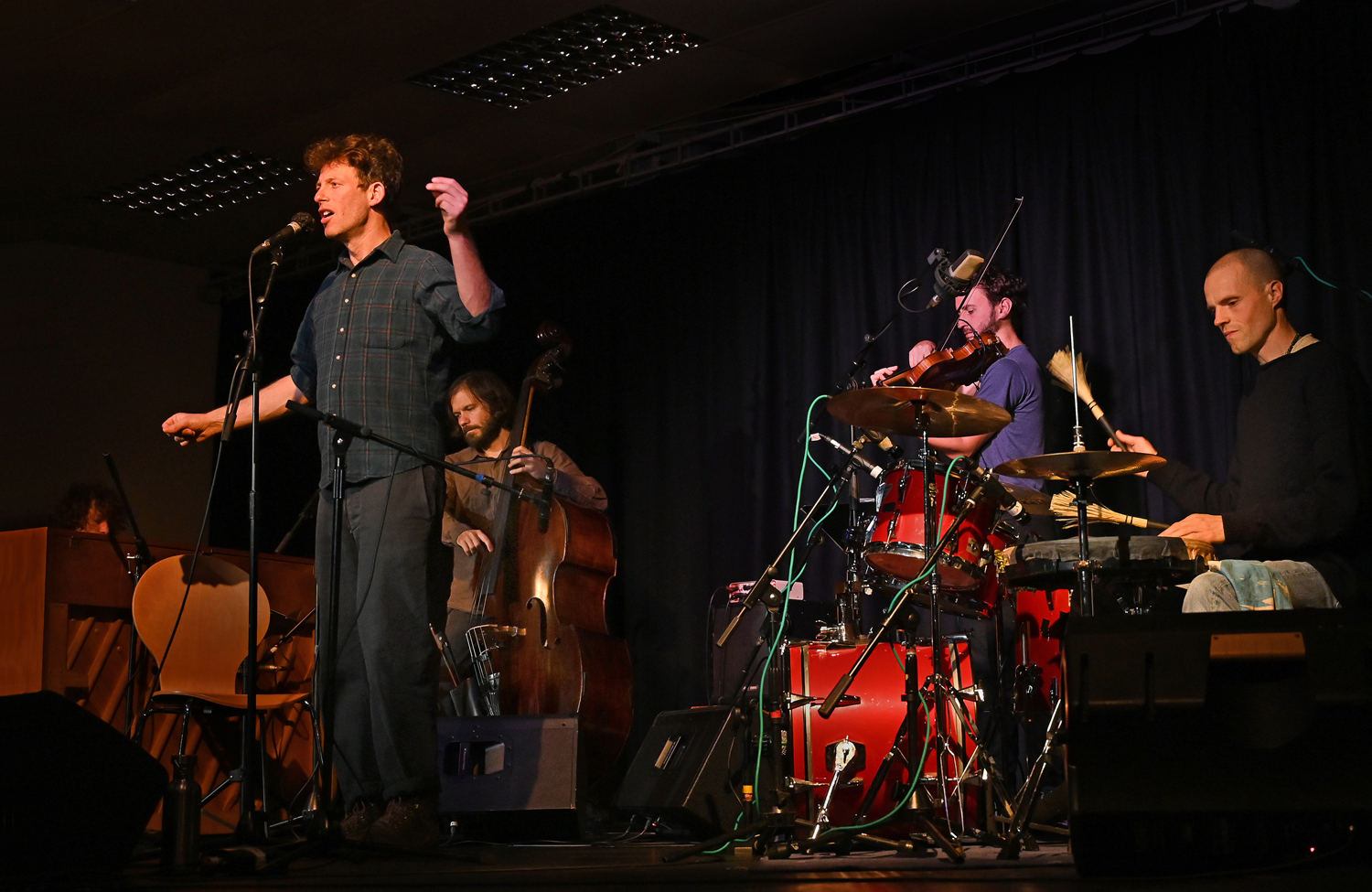 In another pause between songs, the band is introduced and they deservedly receive tremendous applause. While Sam is inevitably the focus of attention and commands proceedings with his superb voice, he’s backed by a special group of musicians. Individually they’re faultless but it’s the way that they interact with each other and Sam’s vocals that really stands out. There’s the impression of something organic and almost symbiotic in their interplay. In reality, I suspect that a great deal of hard work lies behind the finished product.

What they produce is far removed from traditional folk music but I’m struggling to categorise their sound. At times it approaches that of a classical quartet, albeit with different instruments. The phrase chamber pop keeps swirling around my head but it doesn’t quite fit. It’s undoubtedly an amalgam of different genres but I keep coming back to jazz, which probably isn’t going to please purists from either the jazz or folk worlds.

Introductions complete, Sam informs us that they’ve got two songs left. The band don’t know anymore so they can’t do an encore. They start with Soul Cake, another adaptation. Beginning with the traditional song Green Grow the Rushes O, it morphs into something completely different, becoming a tale drawn from the ancient Lancashire tradition of baking Soul Cakes, derived from making offerings to the departed on their Day of the Dead. The song itself begins slowly; almost spoken word accompanied by piano and violin. As it segues into Soul Cake it becomes an altogether more uplifting experience. Bass, drums, shrill violin and piano expand to an almost orchestral sound as the music gathers momentum and pace. Personally, I think it would have been a great way to finish but we’ve got one more number to go. 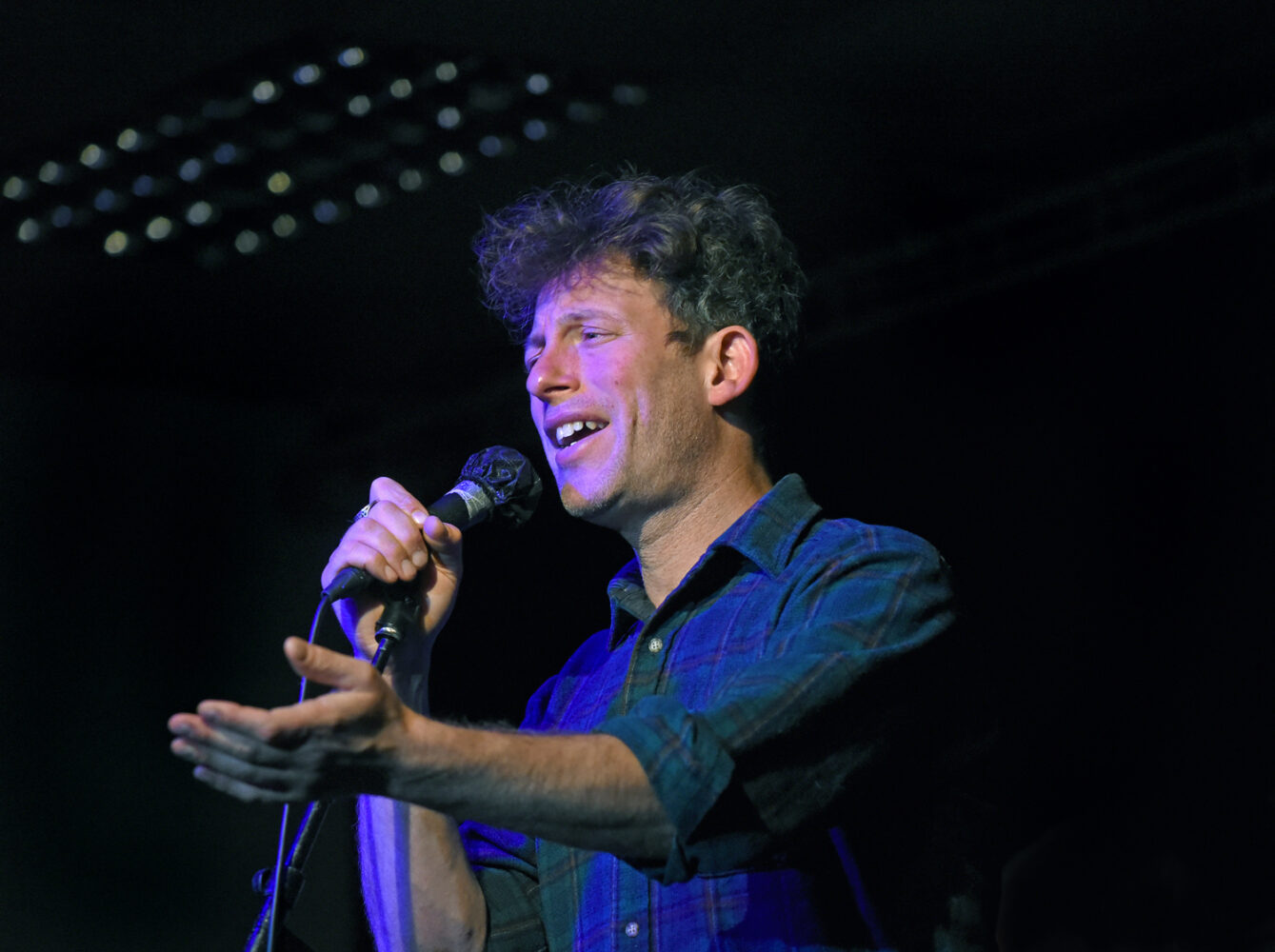 They close with Lovely Molly, superficially a sweet and tender song but with undertones of betrayal. It’s possibly Sam’s best known recording. Lyrically we’re returning to nature, referencing once more the nightingale and turtle dove, and it’s clearly a song familiar to many in the audience judging by their reaction.

We’ve enjoyed a great performance, nuanced and brimming with musical quality. The band have been well received (folk audiences don’t tend to get too excited) in a very welcoming venue that I wouldn’t hesitate to return to. After the gig, Sam and members of the band come out to autograph albums and talk to members of the audience. They seem genuinely engaged and happy to be among us. It’s a refreshing way to end the night.