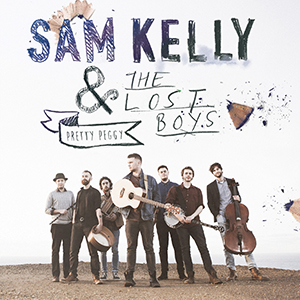 A case of the phrase ‘patience is a virtue’ put to a severe test. The knowledge that Pretty Peggy was completed back in February was no consolation, yet …. Sam Kelly and his band of merry men are finally allowed to unleash on the world an album that for some could be comfortably described as ‘long awaited’.

Fans who are rabidly foaming at the mouth can finally get their hands on Pretty Peggy (if you’ll pardon the expression). It’s true that people have waited longer for less and they do say that  the best things are always worth waiting for…. Which is of little  consolation for six months have passed since Sam Kelly and The Lost Boys have done their work although in the interim period have been frankly tearing new a**holes out of venues and festivals up and down the country, previewing songs and tunes to heighten the frenzy of anticipation.

There’s also the danger of those high expectations from the wait falling flat, although rest assured, Pretty Peggy is full of climaxes that are far from anti. With the X Factor well behind him although now an unavoidable part of his bio, Sam Kelly has unquestionably, yet unassumingly, blazed a trail in the folk field. His name might take top billing and it might be his voice you hear but the real stars are the whole unit – the seven piece Lost Boys that he both fronts and blends into. A band saturated  with youthful zest, energy and ever so slight craziness. Grounded by the outstanding Evan Carson, the folk equivalent of Mike Portnoy in the dizzying number of projects he’s part of, Graham Coe’s cello adds a deep resonance  to the usual folk portfolio of guitars,  tenor and otherwise, bouzoukis, banjos  and fiddles; Toby Shaer possibly getting the award for ‘greatest variety in instruments played on an album’.

So at long last The Lost Boys have the chance to get something off their chest – the stirring Greenland Whale soon erupting into a violent, tour de force folk frenzy with banjo and fiddle shredding worthy of rock gods  and percussive drive that boldly declares the full force of the septet. The album title comes lifted from the lines of The Bonny Lass Of Fyvie, a gorgeous lilt accompanied by the sheer class of Cara Dillon and Michael McGoldrick giving the inevitable celtic vibe. It’s an  opening pair that highlight  the  strength of the bond and musical partnership between Kelly and banjo wizard Jamie Francis, reinforced by the latter’s  When The Reivers Call. The sort of dramatic fayre that Seth Lakeman would serve up at his best.

Lighter moments come in the form of the pant swinging Angeline The Baker and If I Were A Blackbird is the sign to take a breath and batten down the hatches for the onslaught that comes in a second half that  starts with an unexpected swirl of ominous Eastern delight that belies its Scots origins. Robert Plant eat your heart out as the  English South West meets Arabia in a melting pot that takes a typical folk theme on The Shining Ship down aroute towards a Shangri-la beneath a summer moon. A bizarre hairpin change of direction from singing blackbirds to Pharaohs cruising down the Nile returns to familiar Lost Boys territory with the dazzling banjo led Chasing Shadows. And anyone daring to  suggest that it’s a song that borrows a Mumford influence might be asked to politely reconsider their opinion.

It’s the start of a fifteen minute run of the sort of performance that gets people excited  about folk music and perhaps why Jamie Francis is pictured nursing a fire extinguisher in the CD booklet – best not to mention what look like kitchen utensils and Pokemon artefacts. The sprightly Close Shave romp  kicks straight into a pair of tunes from Toby Shaer and Ciaran Algar that have  been getting even the armchair folkies tapping their knees on the summer festival circuit.

As they did with The Lost Boys album, again, they throw a cover into the mix. Rather than reproduce the pretty faithful and respectful style of Sultans Of Swing from that record, Dylan’s Down In The Flood is transformed into one hell of a steamroller. Once again, all seven with the amps turned up to eleven. How do you follow that? With a lively hoedown and then play us out with a pastoral piece straight from the greenwood.

To Sam Kelly and The Lost Boys, the notion of the tricky second album, like most things before them, that gets blown out of the water. You get the feel that Pretty Peggy is another seed sown for a significant pathway.

You can see the music video for Chasing Shadows from the album here: