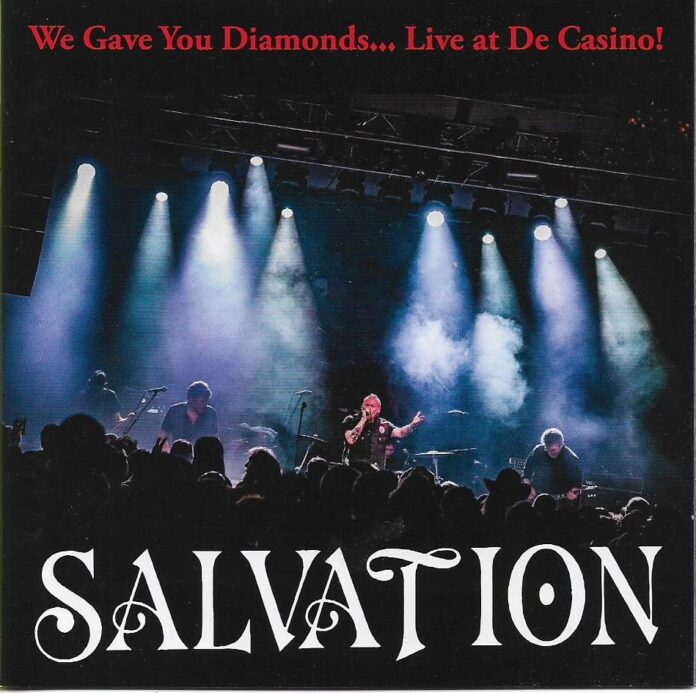 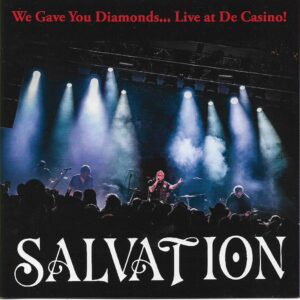 I recall in the late 80’s Salvation were one of those bands perennially on tour, you never had to travel far to see them, they played almost on my doorstep, just four miles away in Birkenhead three times in a four month period as well as twice in Liverpool that same year – despite this and their early connections to fellow ‘loiners’ The Sisters Of Mercy, mainstream success eluded them, their gigs were always energetic, lots of proto goth clambering on shoulders, arms spread eagled type shenanigans; as such when I was handed this album I was surprised to find that this was in fact their first full live release.

But is a live album the best way to reacquaint yourself with a band you have not heard in over 30 years?

On the evidence of We Gave You Diamonds… Live at De Casino! I’d suggest it is. An eleven-track album, recorded in Sint-Niklaas, Belgium back in March 2020, the final night of a four-date tour supporting The Mission. The release via the Salvation’s own Timeslip label is perfectly timed, as they are set to support The Mission once again as they complete a short run of UK dates commencing on the 26th of October.

Opening with The Answer which originally came out in 1986 via the Seek 12” EP, its clear Salvation live have lost none of their melodic power, the audience instantly have their back; driven on by a strong rhythm section, strident vocals from original frontman Daniel Mass and that trademark chanted chorus, coupled with some fine guitar work, similarly during Ladyfaith, and tracks like (Clearing Out The) Debris, which I seem to recall was picked up by the I.R.S label, perhaps label boss Miles Copeland had realised that Salvation were always less dour than many of the early goth outfits, therefore more appealing to a US audience, leaning more into Mission territory – though wisely stopping way short of being mere copyists, and this is evident throughout this recording.

Salvation are a tight unit, they play with confidence, tracks like Puppet Master positively bounce along, whilst The Shining sounds huge, the guitar creating panoramic soundscapes atop of that thunderous rhythm, and with a chorus that invites stage diving, and human pyramids topped by those shirtless arms spread waifs!

Live at De Casino! doesn’t try to rewrite Salvations past, or even forge a new future, instead it captures them as they run through some of their more familiar material, its an energized, polished performance that still retains an edge, and is welcomed by their enthusiastic audience.

Salvation: We Gave You Diamonds… Live at De Casino!

The Answer
Ladyfaithe
(Clearing Out The) Debris
Paint It Rose
The October Hour (Now)
Puppet Master
The Shining
Pearl Necklace
Payola
All And More
Why Lie?