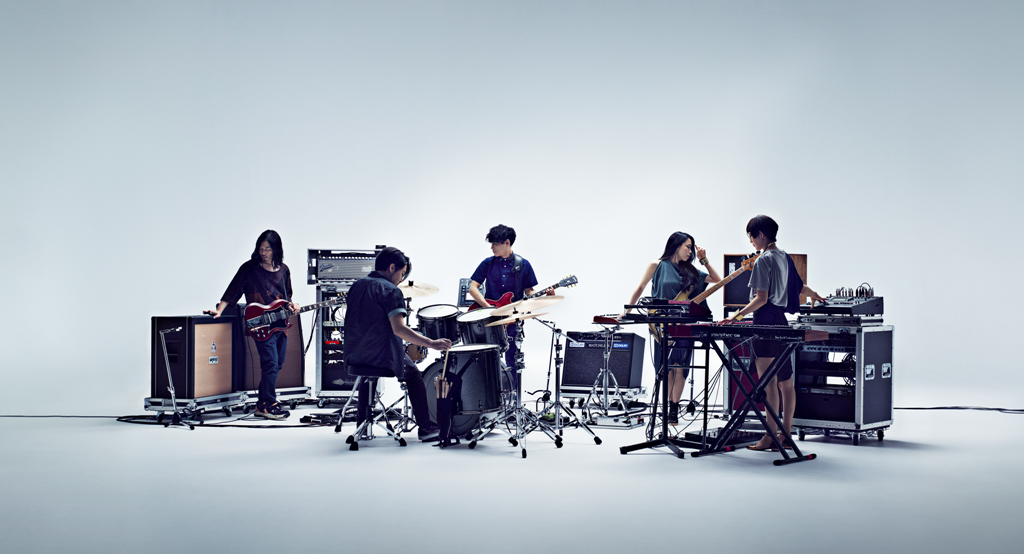 ‘I can’t get no Sakanaction’ as someone never said.

Fast forwarding to a digital future Japanese five piece Sakanaction were formed in 2005 in Sapporo in the north of Japan and are a number one album band in their home country. Their name means ‘fish action’ in Japanese which translates as the ability to move quickly and not get stagnant which they achieve with their fusion of electro/indie and new wave music which sound restless and hard to pin down. They have found a super cool solution of how to fuse the digital with the electronic and have found an interesting and perfect compromise.

They start their set appearing out of the gloom and line up behind their bleeping laptops with the apple logos staring starkly into gloom like some kind of 5 piece Japanese version of a half person half robot Kraftwerk. They then start playing a powerful electro pop- like early Daft Punk with a touch of New Order’s digi melancholia- it’s that kind of rock band submerging themselves with the electronic and creating a new soundscape.

It’s stunningly effective stuff and has the whole venue leaping a round in that super polite Japanese style. Sakanaction hit the big time in Japan with their number 3 single Arukuaround in 2010 and haven’t looked back since then.

Their sixth album has just been a number one in Japan and with their international style and partly instrumental based music it seems inconceivable that they could not break through internationally. What really works in their favour is that their dance/electro music with touches of the cutting edge of rock colliding with the cutting edge of dance culture like a superhip Underworld or an adventure into the digital end of Radiohead really works but vamped up a decade and into the uncertain climate of 2014 adding a precision pop to this awkward year.

Sakanaction deal a truly international language and playing up to Japan’s image of being a the computerised culture country they are the perfect reflection of their zippy, super modern home country and the perfect export, plying a kind of music that slots in everywhere worldwide.

With a whole scene existing in their wake they could be the vanguard of a new epicentre of the electronic music making Tokyo overtake Paris as the new centre of dance culture and hip modern music. This is music that makes you dance and think at the same time – a rarity.
They mix up their style and at some point in their set they start switching to a more traditional guitar/bass/drums set up, hinting back to their more trad indie roots and alive of all the super cool Brit indie band, moving away from the digital fury of the opening shots of their set.

This is dance music at it best- perfect beats and a studied cool and that all important melancholic undertow- there is something attractive about dancing to darkness and Sakanaction know this. They also bring the noise with huge hands in the air choruses that pull in the whole audience.

Sakanaction have the songs and they have their own sense of style- each member oozes an angular cool and they are aperfect looking 21st century band dealing an aloof beauty and cheekbone cool and perfect wardrobe tht matches their music and the have the tunes to match. I

With a live show this good and sparkling and powerful anthemic music like this it’s easy to see Sakanaction being a top 5 band in the UK within a year.