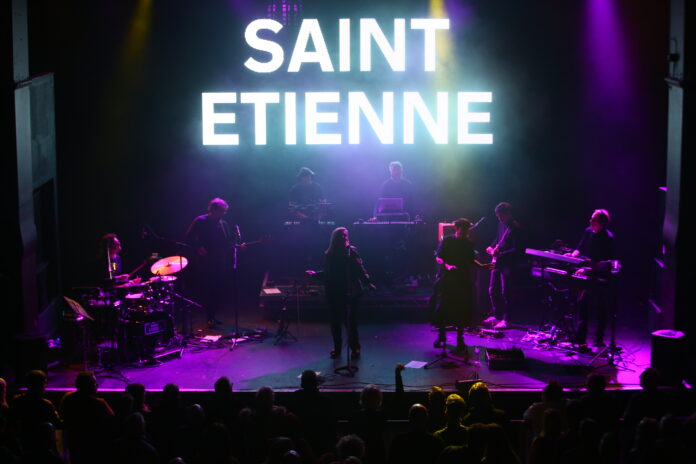 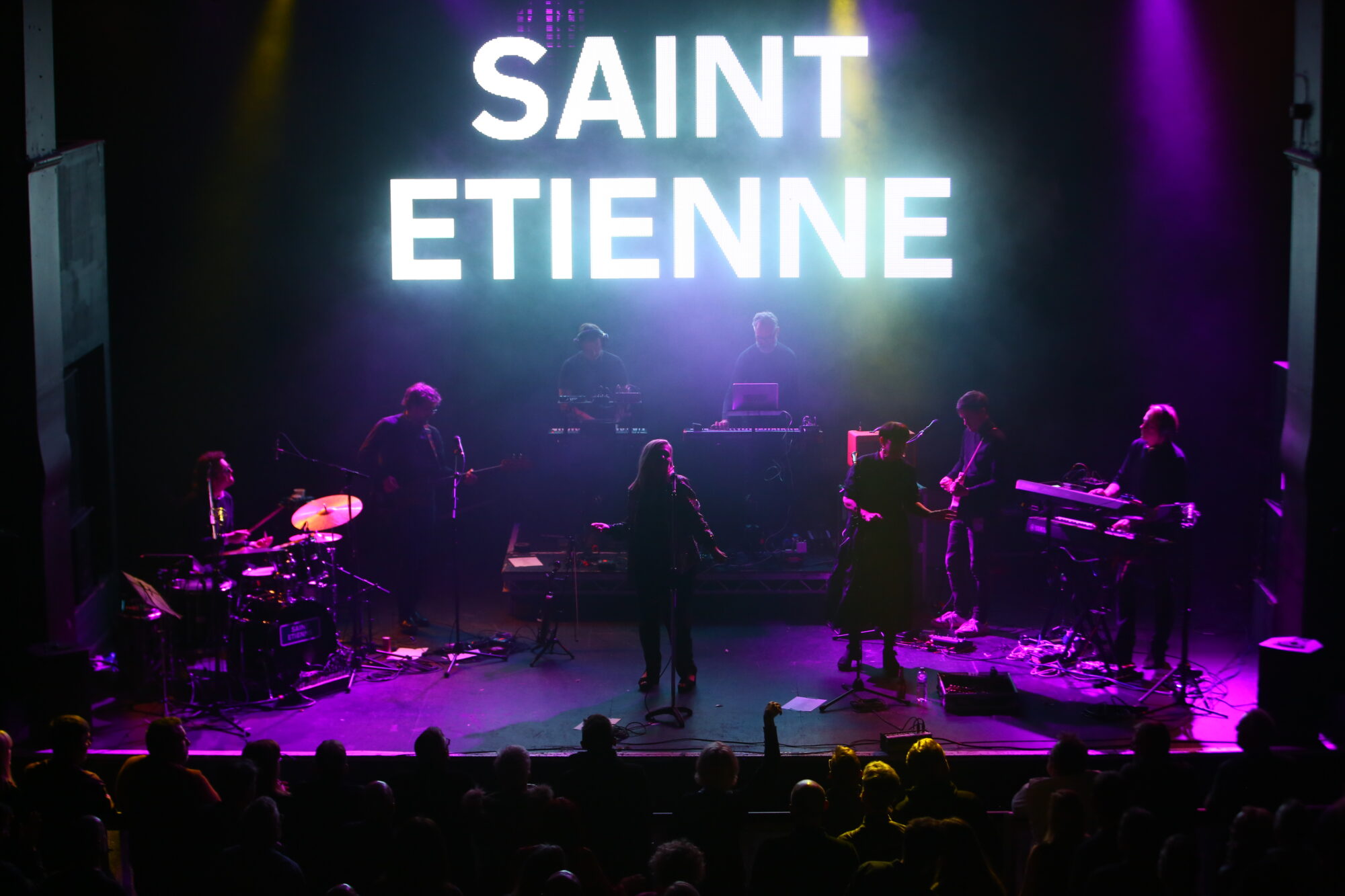 Louder than War’s Martin Mathews spent an evening with Bob Stanley, Pete Wiggs and Sarah Cracknell, better known as Saint Etienne, in the beautiful surroundings of Liverpool’s Grand Central Hall. He reports back on a wonderful evening.

Saint Etienne, who formed in 1990, have consistently been recording and releasing music since then. Their tenth album, I’ve Been Trying To Tell You, was released earlier in 2021 to critical acclaim. How do you categorise the music of Saint Etienne? Is it indie, alternative, dance, electronica or pop? Quite simply it is all of those, and on this short tour of the UK they are showcasing some of the best songs from their career – I would actually go so far as to say some of the best, most perfectly crafted pop songs from the last 30 years.

Looking around it was easy to spot that the band have a large and loyal following of faithful fans, most of whom like myself have been fans since the start, and everyone was having a great time. So onto the show; shortly after 9pm, Music Again, from the new album played along with footage from the film that accompanies the album, and the eight members of the band took their places on stage.

Sarah sounded superb throughout (despite a couple of technical issues with her microphone) and she was joined on vocals by the band’s long time collaborator Debsy Wykes. The band used a whole range of instruments to recreate the sound of the original recordings, including a violin and flute. The setlist (see below) was career-spanning and each song was well received by the adoring crowd, who danced and sang along throughout; understandably the biggest cheers of the night were reserved for the band’s biggest hits, such as 1995’s He’s On The Phone. Sarah introduced the song Nothing Can Stop Us as “the first song she sang on for Saint Etienne” and that ended the main show. 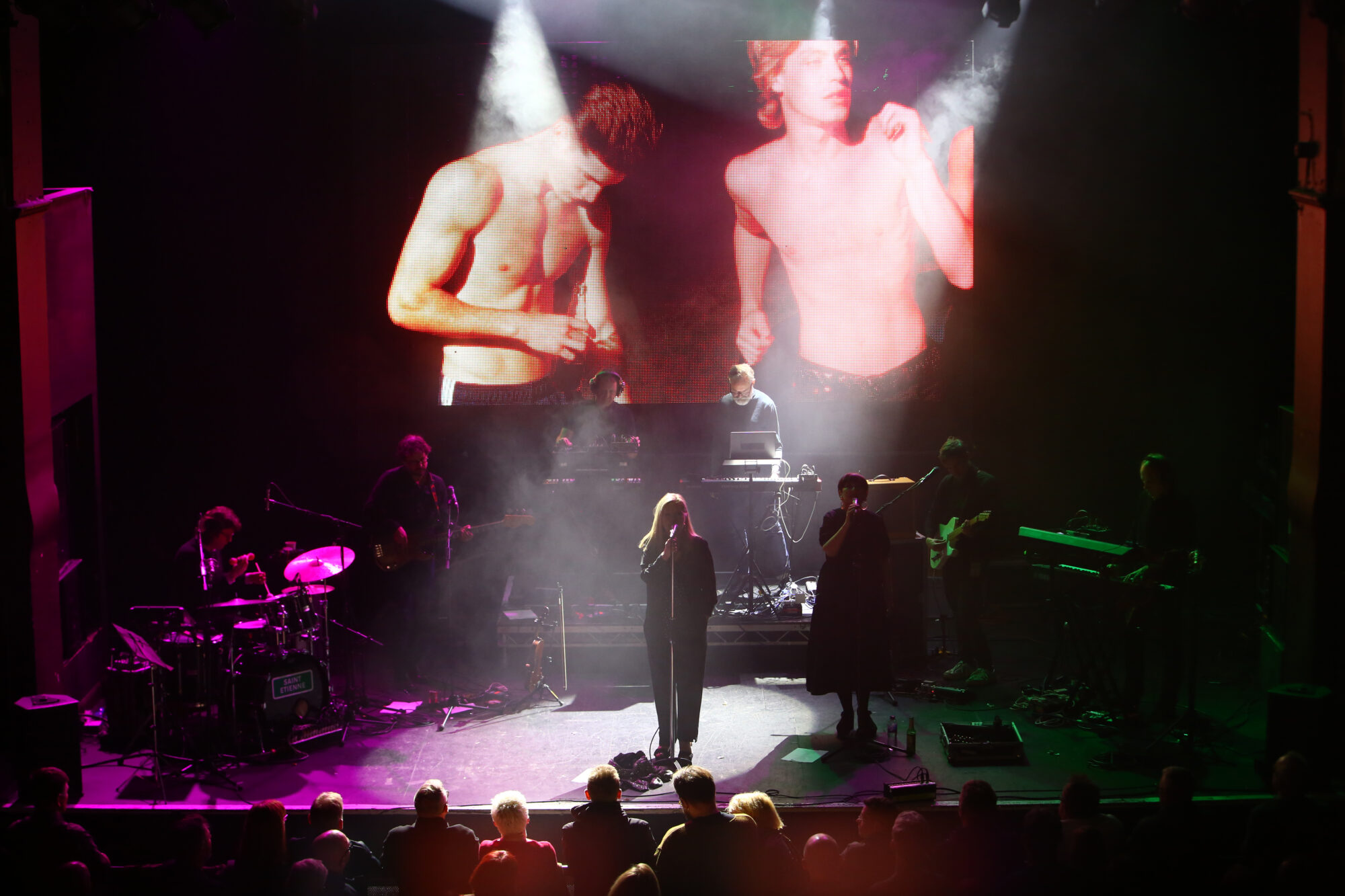 Briefly leaving the stage the band returned for two encores. Sarah appeared wearing her trade mark feather boa at this point and performed their beautiful new song, Her Winter Coat, from their new EP (which was released on 26th November) before closing the show with the full seven-minute album version of Avenue from the 1993 album So Tough.

And then they were gone, leaving the crowd and myself happy but wanting more – being selfish I would have been happy with a show twice as long, but obviously they can’t play everyone’s favourites.

This was a well thought-out setlist, which spanned their entire career and featured many highlights, so I can forgive them for not performing my favourite song of theirs.

Due to the storm that was battering Liverpool during the show, I ended up stranded in Liverpool and finally made it home at 3am, more than 4 hours after the show ended, which was frustrating as hell but after a show like that I didn’t mind quite so much. Nothing can stop Saint Etienne, the purveyors of perfect pop from the Home Counties…

Thanks to Johnny Green for the photos.