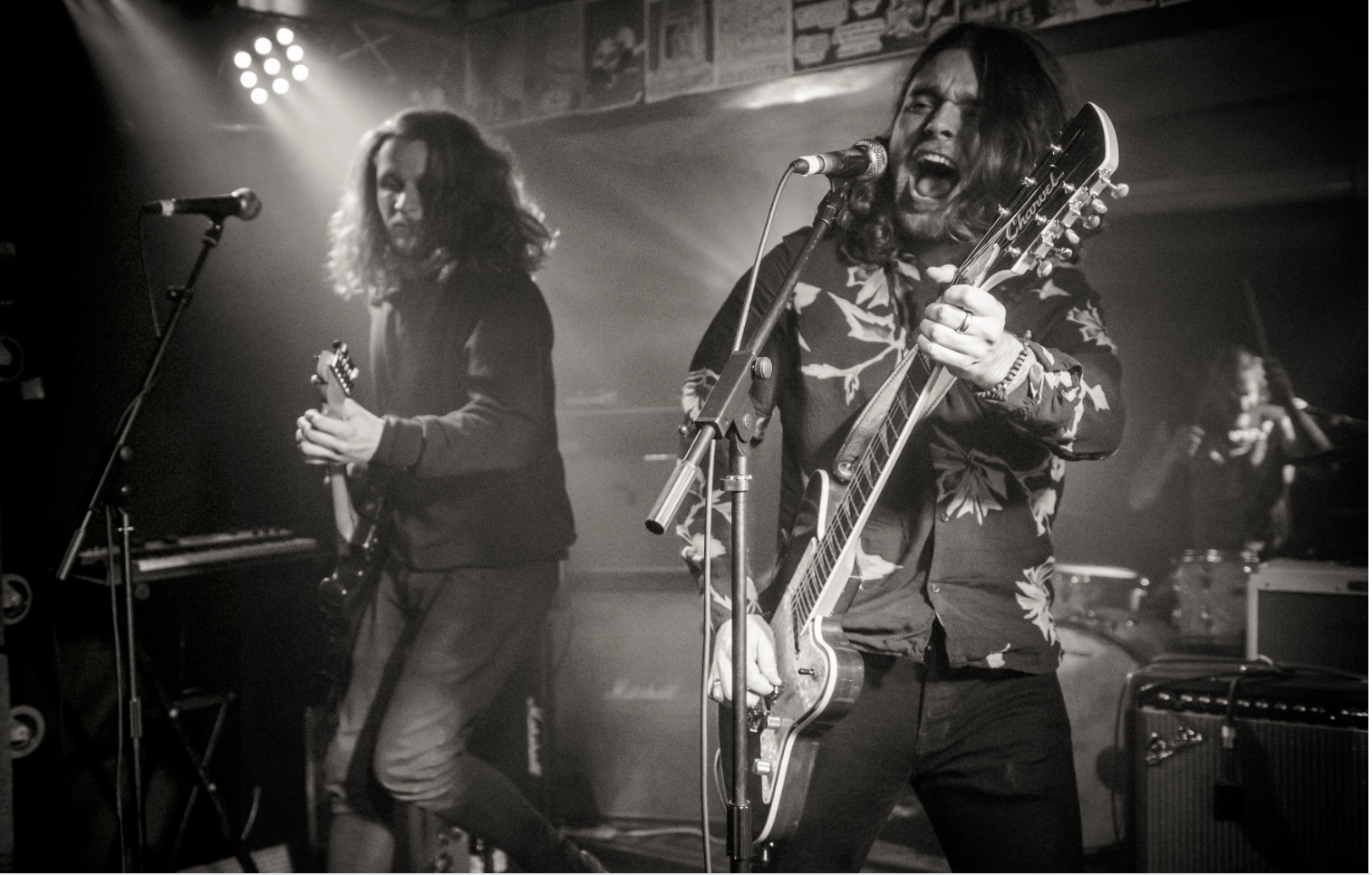 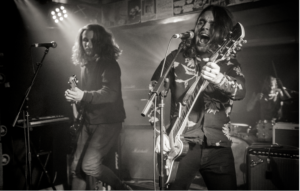 Three bands new to me, and a venue also new to me. The Underground is one of those back-to-the-rock-n-roll-womb blacked out hole in the wall caves you have to walk past half a dozen times until you spot it, tucked out of the way in plain sight along Plymouth’s Sunset Strip (or Mutley Plain, if you must be pedantic, but with two venues within spitting distance with The Junction virtually opposite, it’s still music central and that’s always a good thing so far as I’m concerned), its decor unreservedly subterranean, ceilings plastered with tattered film and music posters, with only the occasional strip of neon blue lights to aid the visually stunted (i.e. me). Yet with impressively pleasing flooring. Nice. My kind of place.

There was no mucking about, with first band Novatines kickstarting the night within half an hour of the doors opening, their unapologetically 70s-tinged bluesy rock, liberally smattered as it is with technicolour washes of dreamy psychedelia, providing a welcoming blast of enthusiasm and energy, as well as creating a neat launch pad for a night that became ever more deliciously scuzzily grimy with each subsequent chest rattling note.

Apparently, King Colobus are normally ‘more bassy.’ This is both thrilling and daunting to hear, as they stormed in with some of the most impressively abrasive bottom-heavy Queens of the Stone Age bass-driven groove I’ve heard in many a moon. King Colobus are one of the most exciting bands I’ve encountered in recent times, merging that off-the-scale bass with a slithering sense of flickering menace that almost becomes gratifyingly gothic at times, whilst never faltering in their instinctive understanding of the value of hooks and the darker hues of midnight blue melody. In frontman Stewart McPherson they possess a bona fide star in the making, and if it makes me nervous to admit it, I may have to consider venturing out of my comfort blanket of the Cornish live scene and head more frequently over the border frontier, if King Colobus are indicative in any way of what Devon has to offer.

Saint Agnes are a glorious firestorm, a melting pot of the dark sonic and visual flair of the likes of Black Rebel Motorcycle Club, the knowing, blade sharp arthouse edge of The Kills, and the trippy keyboard-drenched dreaminess of The Doors. Older readers may recall an episode of Pole To Pole, in which Michael Palin visited a Turkish baths in Istanbul and described his subsequent therapeutic pummelling as being akin to like being treated by a ‘very friendly steamroller.’ This is pretty much how I felt by the time I’d stumbled up the steps back onto the street that night, without once having been jostled or bumped all evening. At one stage I was actually convinced I was having a nosebleed, which I think is a new height scaled even for me.

Bewitching and charismatic, Kitty is a magnetic central presence, twitching with a barbed and slightly unsettling energy as if channelling a spikier Alison Mosshart, offering no time-wasting idle banter, but instead flooding the room with the electric air of prickly arrogance that, to be blunt, most of my favourite rock stars have always oozed from every pore. All shielding fringe, scarlet dress and tattered leathers, Kitty is the type of rock star I still sadly want to be; in the same way that, back in lifetimes past, Courtney Love was for me, I’m almost jealous of teenagers who will get to see her as one of their first introductions to the craft (because I’m greedy and I want that rush again). The set was concise and to the point, all back lights and strobes (the aesthete in me was in raptures; the photographer less so), but that they could pull a decent crowd on a weekday evening in Plymouth proves that they’re rapidly outgrowing these smaller stages. Catch them at this level while you still can.