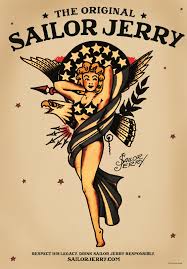 This new short film was shot using a cast of genuine bikers and bar-goers, interspersed with archive footage of skateboarders, stunts, musicians and classic cars. The short film also contains original footage of the inspiration behind the rum, tattooist and innovator Norman ‘Sailor Jerry’ Collins – the personification of an independent spirit who lived life his own way.

‘Here’s To Life Outside The Lines’ is soundtracked by cult classic track Iggy & The Stooges’ ‘TV Eye’, from the band’s classic 70s rock album ‘Fun House’.. This campaign also marks Sailor Jerry’s recent collaboration with the global rock and style icon, for ‘The Flash Collection by Iggy Pop’, featuring designs from the music legend himself. This limited edition clothing range is made up of a denim vest, a hand tooled leather belt and Sailor Jerry Flash patches.

Watch ‘Here’s To Life Outside The Lines’ below, and learn more about Norman ‘Sailor Jerry’ Collins and the legacy of his spiced rum, on the Sailor Jerry website.

Watch Here’s to Life Outside the Lines below