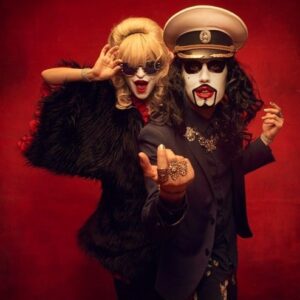 Ioan Humphreys reviews the latest disco release from the Russian duo SADO OPERA and immediately falls in love with their contagious electronica.

SADO OPERA’s last single ‘In the Dark’ was a salacious ode to sex club dark rooms, but their latest ‘Patriarchs’ is an angrier manifesto, while still preserving their delicious dark humour and metallic electro-pop edge. While the erosion of gay rights in Russia is a shame that’s become common knowledge, SADO OPERA are reminding the world that domestic violence is now decriminalised under Putin’s regime, and women often feel like their society is coercing them into becoming walking wombs. This is in no doubt influenced by the other patriarchy in this unholy alliance of religion and state, the Orthodox Church, as well as everyday patriarchs-next-door and men worldwide who refuse to take a stand.

The Russian language lines in the song translate as: “Now, when are you having a baby? OK, now when are you having another?” This sentiment is captured in the promo video, a “stronger together” collaboration with feminist and pro-feminist activist artists that takes in stop-frame animation, bold CGI, plasticine and zines. One scene shows Barbie dolls infinitely giving birth to countless babies and banknotes, while another has maternity Barbies caring for baby boys while dumping girls in a pink rubbish bin.  And while the underlying message is deadly serious, we’re also invited into a revisionist games arcade, where we can play Whack-a-Dick with a mallet or punch a giant scrotum like a boxing training bag.

The song it’s self starts off with a piano riff and gentle beats that meld into what first sounds like some awful euro pop dance bin liner. However, the more layers of electronica and the first appearance of the infectious and noisy as fuck chorus and the repetition of ‘Patriach’ makes one immediately realise you are onto something bloody brilliant with this pair. An added air raid siren to the mix just deliciously ramps up the irresistible throb.

The second verse comes in and it’s only when you start to concentrate on the lyrics that these two are spewing out – ‘power of a bigger cock, bigger gun and bigger stock’ you get to realise that they are fucking angry.

Last third breakdown is a minimalist throb focussing on Katya singing in her Russian dialect. It’s a gloriously noisy and chaotic finale filled with electronica and mixed with the angry repetition of ‘Patriach’ and ‘toxic masculinity’ that leads to a cliff edge finish.

These two know how to make a noise, but more importantly, they know how to make a point. There is lots wrong with the world right now, and certainly none more so than in their own country. And it’s the fact that SADO OPERA aren’t afraid to straight out say what is on their minds and express it in this almost obnoxious fashion is what I love about this band.

They are infectious, not just in the beats they make, but also in the message they portray. They have courage in the face of adversity and the balls to make this art. They should be applauded. Brilliant stuff.