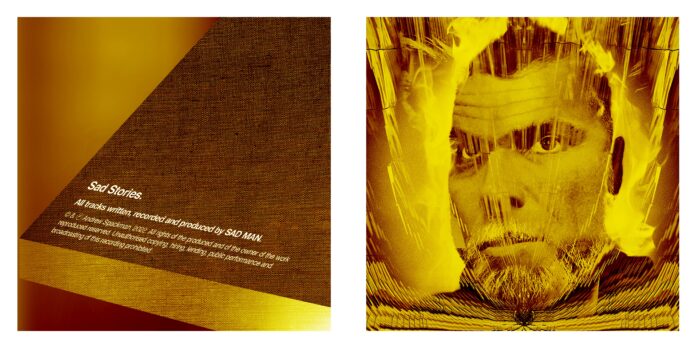 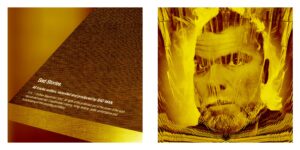 One of the surprise releases of the year comes from SAD MAN, Birningham based electronic music producer Andrew Spackman. It’s an absolute gem of a record that comes in the form of a book which tells the story of this unique concept whilst treating your ears to a special moment. Wayne AF Carey gets sucked in…

Stranger than fiction – SAD MAN’s latest release is also a book. 10 short stories written by 10 music writers, artists and journalists (including our own Gordon Rutherford) who each responded to tracks from the latest album, “Sad Stories”. Each story has also been brilliantly interpreted by illustrator Jay Taylor. Each story has a different take on the central character of SAD MAN and a fresh narrative interpretation of the music from the album. Jason says: “I thought, I’m going around with this moniker of SAD MAN and I’d never even considered who or what he might be. But rather than me imposing that on him, I thought I’d ask others to create their own interpretations”.

This is a concept album but not as you know it. It tells a tale which really immerses you into the world of electronics that bounces up and down with strange sounds tinged with techno that pushes the boundaries within the realms of anything you’ve heard coming from the stable of Warp Records. Think Autechre or Aphex Twin and you’ll know where I’m going with this sophisticated platter of electronica that Andrew creates. Read the chapter first then listen to the track and it resonates with the words that have been written. A clever concept that works and actually reviews itself without me talking bollocks about the intricacies of this futuristic masterpiece. Music is pushing forward at the moment without sticking to the tried and tested formula. Look at the likes of Paddy Steer, creating a myriad of noise that makes you grin and drags you in to a whole new world of aural pleasure.

Rather than describe the tracks here I’m trying something new which you’ll love or hate. Just read a paragraph I’ve picked from each chapter and think about what you’ll hear when you play this wonderful selection of tracks that take you into the future, with the dystopian themes that meld Blade Runner into Doctor Who, with a whole dollop of George Orwell visions layered over the top… 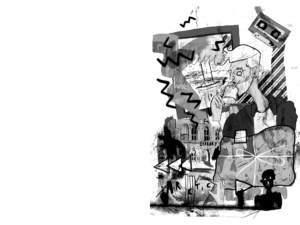 Chapter 1: SAD MAN
Nearly an hour had passed since Sad Man had entered the cafe and nearly all that time he had been listening intently to the contents of the cassette tape. Although completely immersed, every now and then his eyes would dart around nervously, searching, and then return to listening. He had, in fact, become increasingly aware of someone watching him from outside in the street. The rain and sea mist had cleared and now the sky, although still peppered with clouds was relatively clear and pleasant. He switched off the tape and carefully placed his headphone and cassette player back into the pocket of his jacket. He moved stealth-like making as few sudden moves as possible as if diffusing a bomb or carrying out some form of ancient martial art. 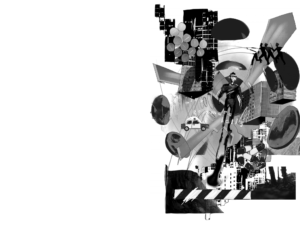 Chapter 2: Bobby Grant (Iniquitous Glory) – Chambers Of Time
The box opened in his hand without him having to use any kind of key or mechanism. A honey golden light struggled out of the box. It wasn’t powerful or sharp – it was a sticky, syrupy light that I had never seen before on this planet. The buzzing transformed into electronic music, futuristic and otherworldly yet primitive and untamed. It had a feral quality to it that was somehow both euphoric and nauseous. The box snapped shut without warning and everything went dark. 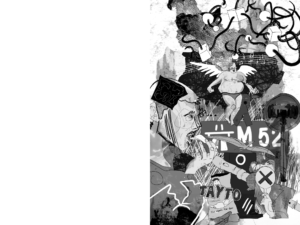 Chapter 3: Francis Lowe (Stories From An Island) – Holes In Hills & Singing Tanks
Patsy spent a year learning music. She started by learning to play the recorder. Luckily her nearest neighbour was quite deaf so her hours of practising went by unnoticed. She moved on to guitar and then piano. She invested in a cheap electric keyboard. At the end of the year, she could knock out a few decent tunes and felt ready to turn the page. 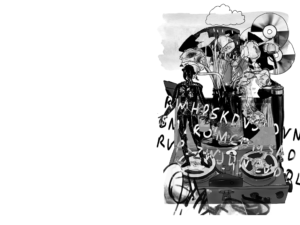 Chapter 4: Paul Gardner (Carbon Grey) – i – Record
The brief was to “capture and catalogue sadness on magnetic tape”. I translated the instruction carefully, more times than I care to count and wrote twice asking for clarification, to confirm I had understood. Both times, the Sad Man merely sent the brief again. Honestly, I thought it a fool’s errand. It seemed obvious to me that our emotional reactions to sounds would be deeply personal, based solely on our lived experiences and meaningful only to us. Take the sound of the front door of the home I grew up in latching shut (sound 017/a). For me its sadness comes from the realisation that this place I knew so well—where I was loved and cared for—is no longer mine, its rooms forever closed to me now. For me and me alone. 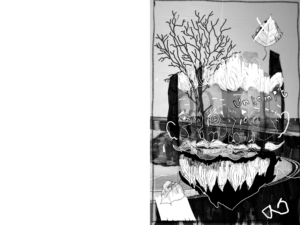 Chapter 5: Mat Smith (Electronic Sound Magazine) – Fall
You stare out the window and zone out. You remember a waitress called Talia at a place you ate at last week; she had the sharp, terrified features of a fawn caught in headlights. You remember a barista called Amy with the blackest hair you’d ever seen, who you laughed with when she mispronounced your name as she handed over your coffee, and whose smile you could only imagine beneath her mask. Your mind ponders what feels like twenty years of constant, unending stress and existential anxiety: 9/11, 7/7, the Icelandic ash cloud, the Global Financial Crisis, bird flu, swine flu, Trump, Covid, energy prices, fuel shortages. A hip-hop track comes on the gym sound system and you find yourself troubled by the misogynistic lyrics. 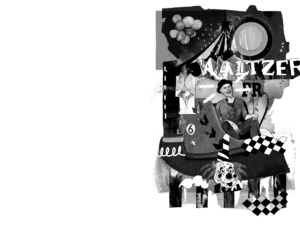 Chapter 6: Gordon Rutherford (Louder Than War) – The Funfair
I had listened to this other tape that he spoke about. Once. To my untrained ear, it seemed out of kilter with the seventies stuff. I suppose it was great in a certain context, but I was pretty sure that the people who visited funfairs just wanted to hear stuff that they might be familiar with. The hits. “Ah, okay. I did listen to the other tape, but it was a bit…well, wonky. It didn’t seem like the kind of stuff that would work at a funfair.” “Have you been busy?”, he asked. “Not particularly”, I said, rather economically. “Then try it. It’ll do no harm. What to do is to put the tape in the other deck. Press the green button marked ‘mix’. The console will do the rest.” “Thanks. I’ll give it a bash”, I promised. Ordinarily, it was the kind of suggestion that you would quickly discard as soon as the suggesting party had departed the scene. But there was something about this fellow. “What’s your name?”, I asked him, as he was turned to leave the fair. “People just call me Sad Man”, he replied, looking anything but sad. Perhaps it was ironic… 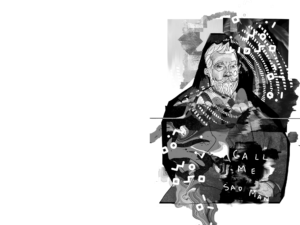 Chapter 7: Spencer Tompson (Fight And Follow)
Whether I shall turn out to be the hero of my own life, or whether that station will be held by anybody else, these pages must show. I am a camera with its shutter open,quite passive, recording, not thinking. All stories are love stories. This is the saddest story I have ever heard. The beginning is simple to mark. Call me Sad Man. 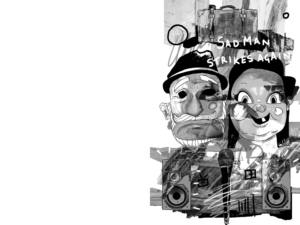 Chapter 8: Shane Woolman (The Wire Magazine)
He fought back nerves as he logged in to discover the first set of recordings. Taking a cold can of beer from the fridge he positioned himself in the crossfire of two electric fans and pulled the headphones down over his ears. The constant use of the automatic activation and shut off functions ensured that the recordings had the dizzying effect of a sound collage and it was hard to make sense of them when they were played back to back. For the most part the files either contained truncated snatches of conversation or ambient household sounds like the television, or cupboards closing which, although helpful for context, were not much use overall. 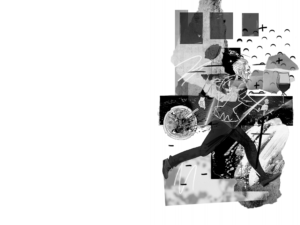 Chapter 9: Andy Wood (TQ Zine)
He poured himself a stiff one and thought…long and hard, and all the while piped music – ambient in style – filled the apartment, the music being different in each room, the music system sounded top of the range too, although there was no physical evidence of any hi-fi equipment. He also realised that simply being in one room and thinking about a genre of music, or a particular performer, the piped music in the room would obey his very thought, and by the end of what became a self-imposed ten-day isolation, he was a dab-hand at changing the music to suit his mood, and the time of day. On occasion he’d set the system to silent throughout the apartment so he could better consider his good fortune. 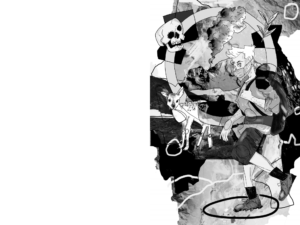 Chapter 10: Francisco J Dominguez (Forest Robots) – A Beginning Inside An End Inside A Beginning
The process carries a host of complex emotions that often (in my case) involve loss and recovery, but just like the process of climbing a mountain tests your level of grace, dignity and empathy, this process of living with your past, present and possible future is quite analogous. It’s the mountain within the mountain, the climb within the climb, it is living simultaneously with your beginning and your end and indeed when the shape of the circle I travel within can only manifest itself in the person I’m remembered by, I do hope to have displayed use of these qualities as well as I attempt to do so during a climb.

As I’ve said earlier, you need to read the book first to get the whole experience off to a start then pull on your headphones for an amazing trip into the world of Andrew Spackman, a true visionary of electronic music that drags you in after every listen. A unique release that stands out from the pack…

SAD MAN is Birmingham based electronic music producer Andrew Spackman. In the past 5 years, SAD MAN has released 18 albums and nearly 200 tracks of original music.