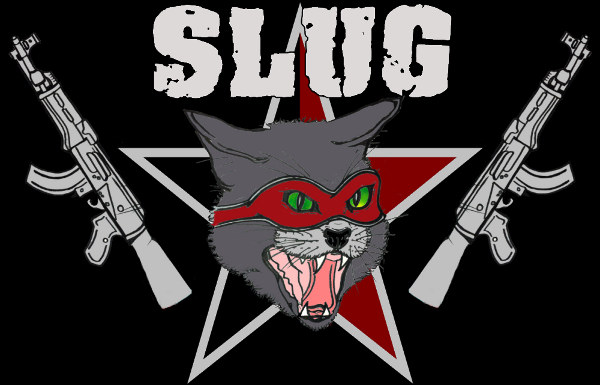 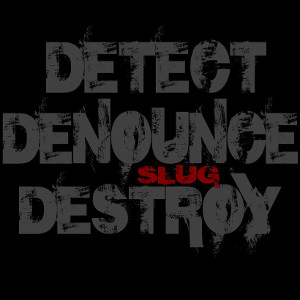 SLUG attack the “Tory Fatherland”, animal abusers, the ruling class and fascists over 13 tracks of mid-fast paced noisy punk .  The soundtrack to my kind of revolution. Louder Than War’s Nathan Brown reviews.

The name S.L.U.G stands for Still Living Under The Gun – the title and chorus of the catchy opening track from this CD.  Class warriors, animal rights activists and anti-fascists, there ain’t no surprises in this anarcho-punk offering but then whoever said you had to innovate to be valid didn’t realise that all art is plagiarism of one form or another.  Those of us who agitate or protest are, to a degree, fighing the same battles as the Chartists, anti-fascists of the 1930s, syndicalists in the 1880s, of the Haymarket martyrs and those who have come since.  So the likes of Joe Strummer, Bob Dylan, fuck…even Woody Guthrie, cannot claim to be true originators, just fellow travellers on a shared journey.  The fact that the messages S.L.U.G put forward are not brand spanking new does not diminish its sincerity or value.  These fellas mean it as well.  They offer more than a defiant pose sticking 2 fingers up at the system.  S.L.U.G are activists whose words reflect their lives, actions and beliefs rather than “anarcho-punk by numbers” or a manifesto for what should be: their words are a statement of what is.  They paint an accurate picture of the truth behind the lies of what they refer to as the “Tory Fatherland” when they sing in “Arbeit Macht Frei”: “Political think tanks lead to queues at food banks.  The vulnerable losing homes while vultures offer high street loans”. 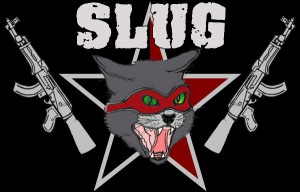 Lead singer Sam, who reminded me of a mini Russell Brand (but less the boufant) the first time I saw S.L.U.G live, has gruff vocals with a rasp that conjures up an incredibly angry Sesame Street character, a being from another planet in  a B-movie, Pig Havok from under-rated hardcore band Pleasant Valley Children or maybe even those undersea creatures from Stingray.  The extra vocals from guitarist JJ are those of the angry mob and his rhythm guitar, one minute chugging and the next buzzsaw, interplays well with effective melodies and breaks from the lead guitarist that conjure up shades of Conflict and at times Bad Religion.  The guitar melodies weave in and out of the thrash and on “Blue Blood” slides and echoes bring to mind East Bay Ray’s work in the Dead Kennedys.  Oddly, the lead on the song “Why?” sounds, to my ears at least, a little like “Electricity” by OMD!  The rhythm section is solid.  Nothing fancy, but keeping the band driving relentlessly forward with a mostly mid-paced beat – the sort of tempo that has been perfected by fellow North Londoners The Restarts.  Drummer Trev has played (and still does) in countless North London bands so his face will be familiar to many.

S.L.U.G contains half of Active Slaughter, for those who remember them, whose “Smash HLS” they re-work on  this disc.  But this isn’t Active Slaughter part 2 – S.L.U.G are more up to date and more competent musicians with the passage of time.

Of special note for both content and general earworm potential, the song “Humanity First Britain Second” shows how bang up to date S.L.U.G are, tackling the current crop of far right hatemongers poisoning the streets – and the internet .  The last half of the song suggests the solution in the singalong refrain “Stand Up. Fight back. Fight for Antifa” with drop outs, a drum build up and a catchy little guitar hook employed to good effect.

It’s great to see new UK bands coming through who have meaning and intellect among the horde of wannabe Rancid clones or throwback dumbed down “UK82” worshippers that often inhabit the spikes’n’studs punk scene.

If punk, politics and intelligence combined is your thing, get this CD from the band’s website: slugattack.com. If you want freebies they also have a Youtube channel and Facebook page.

Words by Nathan Brown. You can read more of his work at his Louder Than War Author Archive.