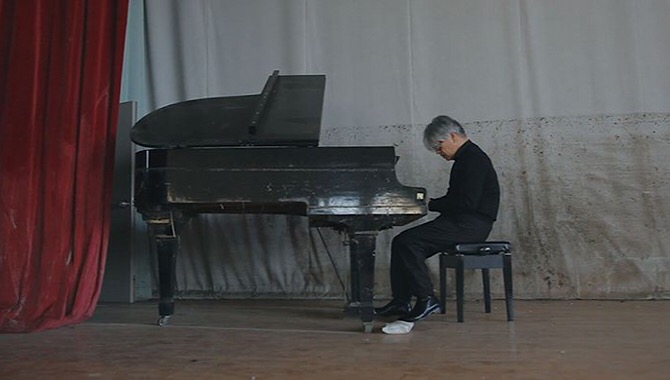 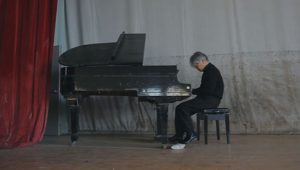 Screening at Home in Manchester and on general release now

In recent years contemporary classical, minimalist and ambient, experimental electronica have grown in popularity with the rising stock of stars such as Max Richter and Nils Frahm, as sonic landscapes and aural textures have gained more exposure, infiltrating the playlists of BBC6 Music and Radio 3.

Ryuichi Sakamoto might be regarded as a godfather of this scene, from his pioneering electronica with the Yellow Magic Orchestra to his film scores for major cinematic experiences such as The Revenant.  Schible masterfully turns the cameras on Sakamoto here as the compelling subject of this beautiful documentary that composes an elliptical yet comprehensive biography of an artist, if not the man.

Chronology, personal details, facts and figures are all refreshingly absent in favour of a format that evokes Sakamoto’s tender and sensitive methods of capturing his own subjects, transforming them into art with the gossamer gloves of a genius stepping in and out of time, and between worlds with an elegant simplicity.

The piano upon the stage, presided over by Ryuichi Sakamoto, has been reclaimed from Fukushima.  Sakamoto plays it, discusses it, contemplates its significance.  When he speaks, he composes.

Raw material is salvaged, scavenged and alchemy is performed.  The air is now shimmering golden vibrations of sound.  The focus returns, sporadically, to this piano and to Sakamoto’s views and use of it throughout the film.  He muses over the tuning of pianos – or any musical instrument.

He talks of the expression “going out of tune” and its relative nature: the instrument is crafted from natural materials but requires tuning to make it palatable to human aesthetic parameters of taste.  He regards the de-tuned piano as in its natural state, he wants to explore the sonic possibilities, he posits the notion of an instrument capable of making a sound that does not dissipate as do the notes of a piano but sustains indefinitely, a sonic analogue of infinity.  This instrument, he laughs, would be the opposite of a piano.

I am minded of what John Cage would do to the piano.  How it became impossible to authentically replicate his compositions on other instruments.  How something caught by the web of constriction that can be musical notation can be somehow unique.  Vibrations, sound, the infinite.

We are in the realm of physics.  Of astrophysics even.  Dark matter, matter and anti-matter, counterparts… My own compulsion to write, when the subject matter allows, anti-reviews – not simply a factual recount and subjective evaluation of a film or gig, but to create a response moulded by the wake of the wave.

During the filming we see Sakamoto ingesting numerous tablets. We watch as he gulps them down, one after the other, in close-up, in extreme close-up.  We see the pills, their different shapes and colours in a cluster upon a grey folded tea towel in his kitchen.  We see him struggle to swallow them down until there are none left.  We hear him talk of his inability to produce enough saliva due to the throat cancer for which he is being treated.

The poignancy of seeing anyone, let alone a great artist, undergoing such and illness and subsequent treatment is poignant enough, but this poignancy is exacerbated by the format of cinema itself.  The effect of recording events and making a film is to turn the present into the past.  Of course, that would happen if no recording took place, but here, inevitably, we are presented with the past, however recent it is, it is there, solidified, concretised, made into an artefact, a thing for which possibilities no longer exist.  It is locked.

Sakamoto is a true artist because he somehow transcends the laws of time through his work.  Situating himself in the raw material of the urban, of the hyper-reality of Tokyo in the 80s, of NYC post 9-11, of the Arctic’s diminishing wilderness, of forests where the dry woodland floor crackles underfoot and birds twitter their avian orchestras incessantly to soundtrack the canopies… of rain drops drumming against the skylight in his stairwell or the bucket he sinks over his head as he walks cautiously out into the downpour, recording device in hand… of the piano from the fallout zone… he is salvaging the past, recording the present, twisting it, mutating it, sculpting yesterday into a new tomorrow, a new now… eventually, as surely as on Earth the wave dissipates and the curve flattens out, a new past.   Somehow, somewhere between these dimensions, Sakamoto interweaves himself as a conduit between these worlds.

He strokes the salvaged piano, he returns to the Kenyan origins of human life, he wants to know the music of the family of thirty who originally migrated from this African region, he speaks of the dichotomies between nature and ‘man’, between conflicting people and his desire to get back to when we were ‘one’.

As well as a rise in the popularity of experimental and ambient music in recent years, there has also been a resurgence of interest in 80s electronica, especially through Vangelis’ and sci-fi fuelled fiction such as Bladerunner and most recently, Stranger Things.  Listening to the Yellow Magic Orchestra now, it seems that the present is catching up and crashing into the music for a future that once seemed so far away.  Sakamoto’s life and music are an affirmation of simply existing, in the 70s, the 80s, in 2018 and beyond.  Sakamoto’s life and music are an exhortation to live, live, live!