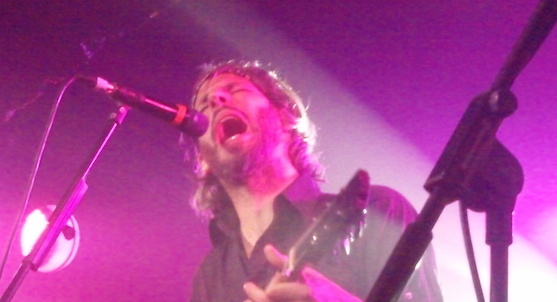 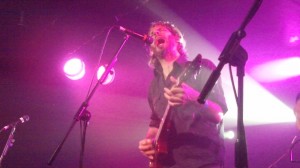 ‘I want you to be honest, man’

That’s what Rx Bandits vocalist, Matt Embree, told me when I mentioned I was writing a review of the show. So here goes…

I stood outside drinking tea and thinking ‘I have a +1 on the guestlist, yet no fucker wanted to come. Am I really that much of a prick?’ I hatched a plan to take one of the homeless that usually frequent the areas around the Academy, but even they seemed to be avoiding me. In all honesty I didn’t care much. I enjoyed watching a band on my own just as much as I did with others, perhaps more.

I hadn’t had a drink for a whole month to the day. This was the longest time dry since I started drinking heavily. This was nearly ten years ago around the time The Resignation album was released, though I doubt the record was my reason for inebriation. My usual plan of drinking the cheaper downstairs bar’s beer until the music started then dashing up the stairs had to be cast aside. Instead I headed in, sat on the floor of the currently empty venue room, listened to whatever the hell the sound guy was playing over the speakers, and watched everyone slowly flood in.

The first and only support of the evening were Astpai. They were a decent enough band and played with a hell of a lot of enthusiasm which the crowd picked up on, quickly becoming interested in this Austrian quartet and seemingly enjoying their set immensely. The issue with this current wave of Menzingersesque, slightly gruff, pop punk bands, however, is exactly that. It’s a wave and it has got to the point that acts playing music almost identical to what was happening on stage have become a dime-a-dozen (or is it penny-a-dozen in the UK?) with very few pushing the boundaries of the genre. This, alongside the fact that this straight up pop-punk sound was preceding a band as intense and technical as Bandits, made it hard to get truly excited and only worked in fuelling my anticipation for the headliners all the more. 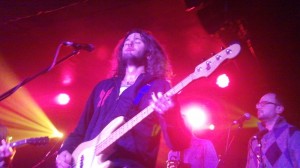 Rx Bandits tore into their The Resignation set with album opener Sell You Beautiful and the place instantly erupted into a mass of heat, sweat, and bad dancing. I spent the first two songs snapping pictures and thinking, Goddamn, I need a new camera. But in truth I kind of liked the shots. The slightly grainy, dim-lit, outcome felt more real than that of the better megapixels than the real world stuff I usually saw. And Bandits are all about being real, looking genuinely stoked at the turn out and playing with a slick boldness that sounded full of impact, while visually maintaining a cool laid back presence. It takes a lot of skill to make music so well thought out and complex flow and feel easy, and I’ve yet to see a band do this live better than the Bandits do every time they play. As the set progressed an emotional arms race began to take place. With every song the band would pour more of themselves into the music and, as some strange bastardised challenge, the audience would up the ante and give twice as much leaving the band having to triple their effort and creating a vicious cycle that nearly blew the walls away with atmospheric pressure.

Watching Rx Bandits play the entirety of an album in track order was hilarious for one reason. The audience, god bless ’em, still reacted to every intro with the same shock and awe as they would at a regular show. This can be chalked down to three possibilities. Either for the most part the patrons hadn’t listened to the record recently and forgot the order, tonight’s audience consisted mostly of music lovers who utilise the shuffle function on a regular basis, or everyone was that damn excited to hear the songs they loved it didn’t matter a single iota if they knew what was coming next, as hearing the music you spent the past ten years loving through your headphones ooze out from a stage was a better high than the kick from any class A. I’m betting on the last.

The album set closed with a violent storm of a rendition of Decrescendo. This would have finished off the best of crowds but as the band exited the audience hungered like wild dogs for more. We clapped our hands with such determined rage that soon the skin began to tear away until there was only bone, and we carried on still with the belief that working through the pain of smashing the cartilage together just a few more times would be enough to coax them back out to play for us again. We howled at the stage longingly until our lungs gave out, only to be given new breath as Rx Bandits returned and played a trio from And The Battle Begun, complete with audience participatory parts and extended ad libs. Throughout the set there had been a huge hippie vibe not only from Matt Embree’s on-stage gyrations but in the way the audience seemed to dance and flow with the music as if locked into a trance. There was no doubt in my mind that this was the closest thing to the atmosphere of Woodstock I would ever feel.

Finally defeated, we all headed outside. I bumped into a girl I had once fooled around with who was flyering for a club night at a nearby bar.

‘Ian! How are you doing? You look a lot better and healthier than you did the last time I saw you!’

But why had I looked, and felt, so goddamn chipper? Was it the lack of alcohol over the past month, or the almost transcendental feeling I’d experienced watching one the greatest bands around today tear apart the entire venue with music both they and their fans adored?

<strong>All words by Ian Critchley. More writing by Ian on Louder Than War can be found at his <a href=”https://louderthanwar.com/author/ian-critchley/”>author’s archive</a>.</strong>