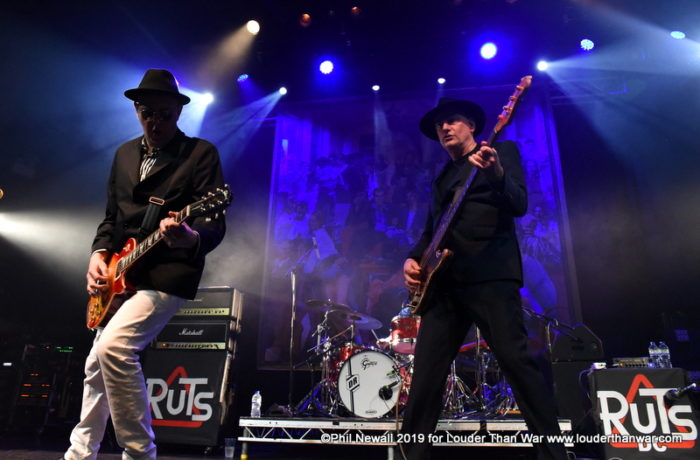 Lesser bands would have been destroyed by the tragedies to have befallen The Ruts; these range from the premature death of their talisman singer Malcolm Owen in July 1980 aged just 26, this on the eve of a US tour that surely would have seen the Ruts gaining international recognition and sales; but even those projected album sales would have been bitter sweet, such were the terms of the deal the band had struck with Virgin Records; the final tragedy being death of founder Paul Fox in 2007 following a battle with lung cancer; most bands would have just called it quits… but the Ruts aren’t like most bands – that’s evident as you watch them on stage together.

Tonight’s stage was the Ritz, Manchester, a huge backdrop displaying the cover of the band’s seminal album ‘The Crack’, this tour being to celebrate and remember the events since it was released some 40yrs ago. These days the three-piece unit comprising founders Dave Ruffy (Drums), Segs Jennings (Vocals, Bass) and Leigh Heggarty (Guitar) perform as Ruts DC; this is reflected as the logo of both Ruts and Ruts DC colour the bands equipment.

On the first night of this tour Auntie Pus (aka Julian Isaacs) introduced the Ruts with a live spoken word piece entitled Rut Rap, the band enjoyed it so much the piece was recorded that evening and was played as an introduction as the band appeared on stage tonight; Segs as ever, the dapper gent in a smart well cut suit topped with a black fedora cradles his road worn bass, Dave Ruffy in a 50’s style loose fitting shirt and beret, whilst Leigh Heggarty, the perennial ‘new boy’ adopts a more traditional punk rock look in a prison stripe shirt, white jeans and black brimmed hat; head gear is important to the Ruts! 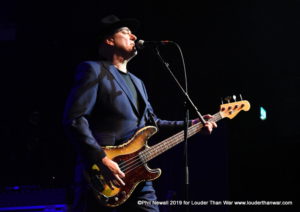 The expectant crowd knew the running order, at the least for the first two thirds of the set as the band launched into ‘Babylon’s Burning’ the familiar sound of the alarm and piercing police siren causing the crowd to surge forward; we are seconds into set and its clear the Ruts are firing tonight, Segs reggae tinged bass line perfectly complimenting Ruffy’s use of the hi-hat, Segs vocals are strident, clear and drive the song forward, he and Leigh criss-cross the stage ahead of the instantly recognisable guitar into of ‘Dope For Guns’, the Ruts are playing with seething urgency, it shouldn’t be like this; these songs are 40 years old, we’ve all aged, life has dealt some savage blows, but tonight its clear the Ruts are here to celebrate – this is not some nostalgia trip, this was evidenced by a large section of the crowd who were clearly not even born when ‘The Crack’ was released, this is an album that has crossed the perceived genres, the Ruts were not a punk band, their music was way to clever to confined… ‘S.U.S’ is delivered with menace and foreboding, the crowd chanting ‘Don’t make no fuss”… ‘Something That I Said’ and ‘You’re Just A’ perfectly lining up ‘It Was Cold’ which was delivered with intensity; Segs is rhythmically shuffling across the stage, his face a huge smile, matched by that of life-long friend Dave Ruffy; the key to this performance is that the band are friends, they enjoy each other’s company and enhances their delivery.

Side one complete, and were into ‘Savage Circle’ the crashing drums, slashed guitar and barked lyric, ahead of ‘Jah War’ a track which essentially defines the Ruts, Segs sublime bass, the minimal drums complimenting the guitar all allow the track to breath, the very essence of dub… ‘Back Biter’ had the crowd forming a mosh pit, who were then rewarded with ‘Out Of Order’ and a savage version of ‘Human Punk’ that was dedicated to the late Pete Shelley. 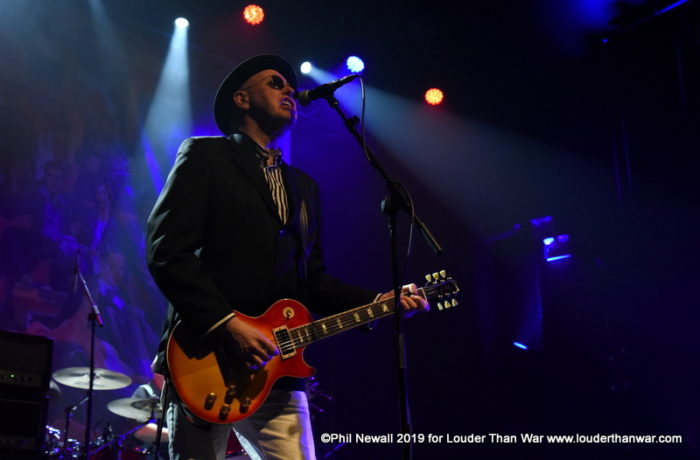 Dave Ruffy stepped out from behind his kit and addressed the audience, thanking everyone for their support, before poignantly remembering both Malcolm Owen and Paul Fox; Segs advised that they would now be playing some “new, and some older stuff”

Opening with ‘Music Must Destroy’ from the 2016 album of the same name, this track like the entire album demonstrates a band confident in their song-writing, then we step way back to ‘West One (Shine On Me)’ which Segs introduces by telling the crowd it was written about Malcolm Owen becoming lost in London’s West End, personal favourite ‘Kill The Pain’ shows how Segs has matured as a vocalist, ‘In A Rut’ ignited a further mosh pit, bodies clattering into each other as the bass rumbles around the entire venue, fists are pumping the air ahead of the nagging urgency of ‘Psychic Attack’ and then a rare performance of ‘H-Eyes’ which despite being some 41 years old sits perfectly within this all-encompassing set; that only really left room for the magnificent dub bliss of ‘Love In Vain’ as Segs peppered the lyric with tributes to friends lost on the Ruts journey, and then a triumphal ‘Starring At The Rude Boys’ brought an end to a jubilant evening.