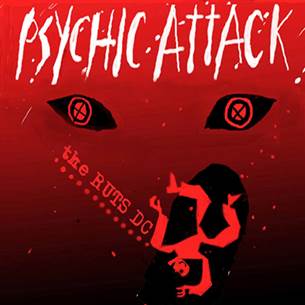 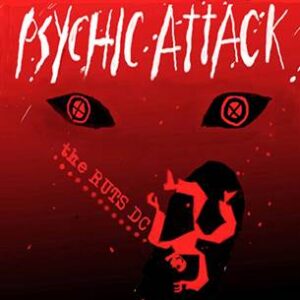 ‘Psychic Attack’ released May 20th precedes the release of the new The Ruts DC album ‘Music Must Destroy’, due September 16th, and heralds their return to rock in dramatic style, with three-minutes of high-energy, adrenalized fury….says the Press release. Ged Babey notices something as he sat down to review the single.

They have added a ‘The’ to the front of their name. It was always Ruts DC, but the artwork for this absolute killer single says The Ruts DC doesn’t it?   Not that it really matters.  (Not in the way that it’s Buzzcocks and not The Buzzcocks….)  But it is curious.  Psychic Attack really does have all the dynamics, grace and controlled power of one of the classic singles by The Ruts.  As John Robb said a few days ago, it “defies gravity, logic and time and is somehow as brilliant, razor sharp and concise as anything they have ever done”.  So maybe that is why they have lengthened the name so that its clear that this is in essence still The Ruts and Ruts DC? The latter being better known for being more reggae than rock.

OK, we all know that two of the Ruts are no longer on this earthly plane, but they live on in peoples hearts and minds and in the electricity and decibels and magic in the air when the current band play.  Every time someone, somewhere on the planet, plays a record or CD by the Ruts -Malcolm Owen and Paul Fox are remembered as the great artists in their field that they were.  Not in the numbers perhaps that Bowie and Prince will be remembered, but with just as much, if not more passion, because these were our punk-rock-reggae heroes. Outsider Kings.

I should be telling you about this single though; you’ve seen the video and heard the lead track.  It’s probably the best 3 minutes (exactly) of punk rock’n’roll you will hear all year.

Here is what Segs had to say about it;

“It’s been a long time coming but the time has never been so right,” explains Segs. “We’ve been writing over the last year or so as we’ve been touring around, inspired by the newly found interest in what we’re doing and the many live shows we’ve done. Lyrically it’s hard hitting and ‘Psychic Attack’ is about pressure; being persecuted by enemies, so called friends, the state or even yourself. It’s important to know that you are not alone in your struggle. Our message is simple…people unite”

It’s sounds a bit like Thin Lizzy playing a re-write of Neat Neat Neat. You can’t get any better than that really can you? I don’t know if they needed the Dr Who understudy’s play-acting in the video mind.

The B-sides are called Psychic Disturbance and Vox Teardrop (instrumental) and are a digital Dub  version of the A-side and a psych instrumental.

The dub one is mind-blowing. Obviously its too fast to have a real dub feel, but with treated drums, fragments of lyrics and that hammering bassline and the usual dub-fx it has almost a punky Glitter Band in Space feel.

Vox Teardrop (a type of guitar favoured by Brian Jones among others) starts a bit Hawkwind then goes in a The Creation type psych-rock instrumental. It seems to be musically the same as Psychic Attack (though I could be wrong..) but slower and trippy-er.   As a stand-alone instrumental track it’s a cracker and not just a throw-away b-side.

This isn’t a ‘comeback’ but if it was, it’d be the greatest comeback since Lazarus.  It’s the continuing story of The Ruts DC and it’s an explosive start to a new chapter.  Can’t wait for the album…..