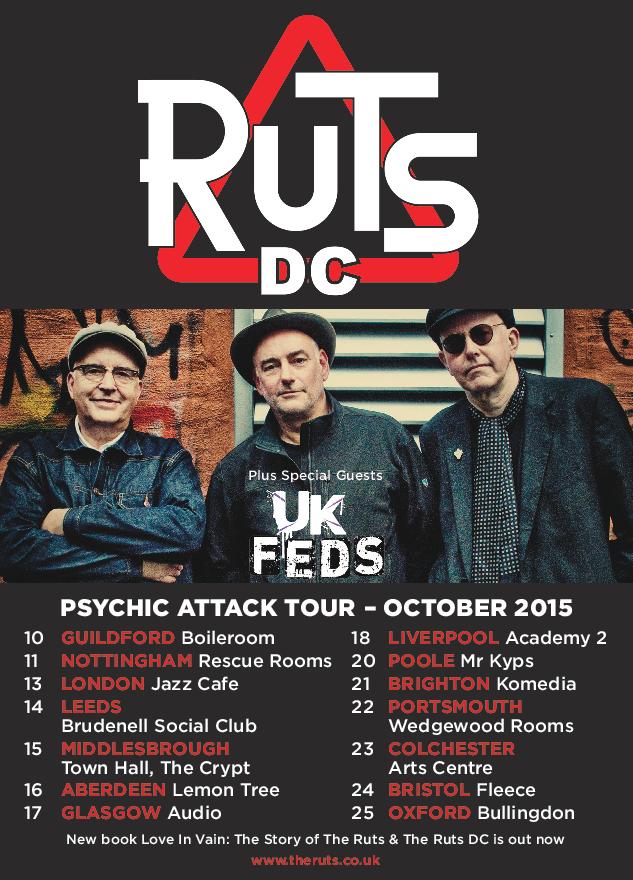 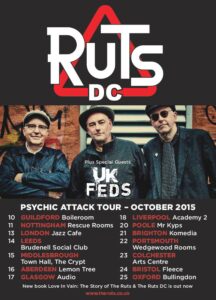 It’s starting to feel like a Ruts DC gig in London is an event again. Tonight in Camden the Jazz Café is nicely full for the home town leg of the bands ‘Psychic Attack’ tour and the air’s full of anticipation and expectation. This great band, who initially had such hesitancy about coming back, have now hit such a confident and creative stride that there are three brand new songs in the set, the first of which, ‘Surprise, they open with and its hard pop shell sounds like a natural progression from 1981’s much underrated ‘Animal Now album if they hadn’t diverted into magnificent dub reggae territory with ‘Rhythm Collision’. Tonight’s show is a little frantic at times, Ruffy’s drum kit moving around to his frustration, but that hint of tension and edge always made the best Ruts and Ruts DC gigs and nothing’s changed. Segs is in sparkling form, chatting to the audience as if we are all old friends which to be honest most of us are! He mentions that he and Ruffy came to the Jazz Café to see Sly and Robbie and I can’t be the only one to note the symmetry, reggae’s greatest rhythm section aligned with punk’s finest drum and bass.

Meanwhile guitarist Leigh Heggarty has become such a central figure in the band with his astonishing guitar playing you wonder if anyone else could have fitted into Paul Fox’s role in the same way and then made it his own with so much respect for a band he loved back in the day and still does now he’s a central part.

The opening part of the set is carefully planned, occasional delving back to those glorious punk roots, but reminding us that there was always more to them than being just another punk band. ‘Mighty Soldier’ from ‘Rhythm Collision Volume 2’ is an early rallying cry and gone are the days when they almost embarrassingly pulled out tracks from ‘Animal Now’. Here they play three songs from it in a row, the brittle ‘Mirror Smashed’, the vicious anti-war ‘No Time To Kill’ and the rarely played ‘Dangerous Minds’ where they seamlessly drifted into post-punk territory, haunting riffs and suspicion of power rightly to the fore. This may have been a band in mourning after Malcolm Owen’s death but they never stopped being magnificent songwriters. Then it’s time for another new one, ‘Secondhand Child’, an almost Springsteen-ess gritty song about abuse which Segs sings with all his heart and soul. It’s clear that the songs they are writing now matter just as much as any they have written before and the quality control process remains just as tight and rigid.

‘SUS ‘ kicks in hard tonight, sounding somehow from another age and of the moment at the same time, whilst ‘West One’ still raises the temperature to molten lava levels and then they throw in the last new song and it’s no accident it appears on the home straight. Quite simply ‘Psychic Attack’ is a three minute ball of fury which could have appeared on ‘The Crack’ – so much so that you can almost hear Malcolm Owen singing it. When they debuted it at Rebellion back in August never has the Punk festival audience reacted so enthusiastically and positively to a brand new song and similarly tonight the cheers are long and lasting. Then it’s time for ‘Love in Vain’ which veers into ‘Police and Thieves’, Segs sending love to those not with us anymore – Joe Strummer and Junior Murvin and of course Foxy and Malcolm. It’s followed by one of their finest ever moments’ Jah War’ at which point Segs introduces long time friend, Brixton MC Supa 4 who weaves in and out of the dubwise grooves and enhances the life affirming love and peace message which is embedded in the bands identity. When they fire out ‘Staring at the Rude Boys’ and ‘Babylon’s Burning’ you think it can’t get any better but then Rupert Orton from the Jim Jones Revue joins them for ‘In A Rut’ which segues into ‘Public Image’, ‘Shakin All Over’ and, believe it or not, ‘Human Punk’ the guttural raw which ends ‘The Crack’. It’s a chaotic and thrilling end but they can’t leave it at that of course, firstly coming back with a version of ‘Brand New Cadillac’ before the opening chords of ‘Something That I Said’ propel them to a final double hammer of ‘Society’ and ‘H-Eyes’ the band in perfect harmony with their past, present and future.

2015 has been a great year for Ruts DC. Roland Link’s exceptional book, Love in Vain’ finally telling their story, a fine 7″ single re-recording and updating ‘Jah War’, a huge tour taking in Europe, the UK and next month Australia and New Zealand and then there’s Virgin’s soon to be released 4 CD Ruts Box Set to remind us once again of what an astonishing band the Ruts were. Yet the greatest compliment Ruts DC can receive at the moment is that they will soon be starting work on one of the most eagerly awaited albums of 2016.