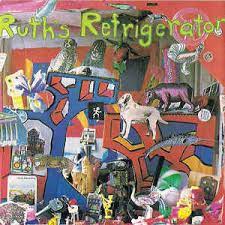 Ruth’s Refrigerator – A Lizard Is A Submarine On Grass

2CD reissue of the 1991 album by Ruth’s Refrigerator, presented here in both the original vinyl and CD running orders. The first CD includes covers of Wire’s Outdoor Miner and Daydream Believer, made famous by The Monkees. RR were another in the series of post-Deep Freeze Mice bands that feature that outfit’s leader Alan Jenkins. Ian Canty decides to stay firmly rooted on dry land…

I think it is fair to say that Ruth’s Refrigerator were probably one of the more accessible of Alan Jenkins’ myriad of musical ensembles. That is not to say that there is no room for the experimentation, out-and-out strangeness and offbeat wit that have become his trademarks, it is just that on this album A Lizard Is A Submarine On Grass they are on a bit of a tighter rein. This band feel much more rooted in a pop context, turning up some cracking tunes as they alternate female and male vocals depending on the song in question. The line up of singer and guitarist Ruth Miller, a rhythm section of Terri Lowe and Robyn Gibson, Blodwyn P. Teabag on keyboards and of course Jenkins himself was established in 1990 and debuted with the Suddenly A Disfigured Head Parachuted LP in the same year. A Lizard Is A Submarine On Grass was their second and final collection.

This set has both the vinyl and CD editions of the album on separate discs. The two versions are actually totally different recordings (apart from A Science Bar, which was remixed for CD), with divergent running orders and contents. The first disc of this 2CD set presents the LP version and also adds seven bonus tracks. What becomes quickly apparent is how well the multi-pronged vocal attack of Ruth’s Refrigerator actually works. Various members of the band, mainly but not only either Ruth or Alan, sing lead on the different numbers. The voice chosen always suits the material well and this approach has the added bonus of offering a greater variety, while not compromising the band’s cohesion and winning way with a good melody.

Opening salvo Moulted Fur From A Labrador might have a typically strange Alan Jenkins title, but the sound evoked is not actually that far away from the kind of irrepressible, minty-fresh vigour that was such a feature of Blondie’s debut album. Alan is in good, edgy form on the pleasing and speedy psych fuzz of E and What We Waited For And Where It Was At proves that he can pen as touching song of lost love as practically anyone when the mood takes him.

Between the snippets of Ducklings #1 and #2 we get the prime garage organ sound of Rain and the neat 1960s pop of Examine The Insects And Hit Them comes complete with authentic 60s rave up sections. A cover of Wire’s near-hit Outdoor Miner and the galloping beat of Barry Baked Bean Is Back provide the preface to the lengthy experimental piece A Science Bar.

Guitars, backward warps and drones dominate for a while, until the band begins to gather momentum a minute in, with a touch of Alan Jenkins’ ESM (Experimental Surf Music) detectable about the guitars. Then it slows down awhile, but then speeds up to a r&b sound with female vocals. This happens at around the four minute mark, with the lyrics being a story of a scruffy but highly intelligent mongrel winning a dog competition. Throughout there are crazy, but cool changes of tempo as the players stretch out and warm to the task at hand. A brief drum solo (don’t run away) then gives way to a sunny folk pop sound and there are some lovely dual vocals at this point that help drive this track towards its conclusion.

The bonuses on this disc include a version of The Monkees’ Daydream Believer and different takes of the album tracks Barry Baked Bean Is Back and What We Waited For. There is also the manic wah wah mayhem of Conversation Gap #1, another Ducklings piece with a drum solo tagged on the front and Charlie ‘n Charlie, a soaring and lovely pop effort which again prefigures Alan’s work in ESM. This first portion of A Lizard Is A Submarine On Grass closes with a fairly faithful take of The Velvet Underground’s Femme Fatale.

The second disc gives us the CD version of the album and features a cover of The Monochrome Set’s Goodbye Joe. There’s a longer, remixed version of A Science Bar and Barry Baked Bean Is Back has Ruth’s vocals (I think) instead of the male voice on the two attempts of the song on the first disc. There’s also some changes of emphasis here and there, but the spirit of the songs, albeit in a vastly different running order, remains.

There’s three versions of the Sasha Distel-bashing Accordion Music and Gosh What A Lot Of Umbrellas here could be St Etienne, if they were more a weirdo psychedelic indie pop thang. A lovely effort. It needs to be said that the punchy rhythm section powers things along splendidly, so lively and they deserve a lot of credit for keeping things focussed. Not to be outdone, the guitars psych-out marvellously and the keyboards provide both grace and hammer when required.

In either form, A Lizard Is A Submarine On Grass is a bracing, tune-filled psychedelic pop compendium blessed with an enchanting touch of the mysterious. Ruth’s Refrigerator, on this showing, were clearly a vital force to be reckoned with. Sadly not long after this record came out they split up, with Alan, Robyn and Blodwyn going on to form The Creams (Their collection The All Night Bookman/Net Yangers is reviewed here) and Ruth and Terri Lowe launching their band Po!. This release has been restored from the original analogue tapes and sounds glorious.

Though the rest of the world didn’t take much notice, rest assured that Ruth’s Refrigerator were fittingly cool and this album set is really worth your attention. It offer a great point of entry into the world of Alan Jenkins, but putting that to one side A Lizard Is A Submarine On Grass is an excellent and highly listenable record, stuffed with memorable tunes and great performances, plus putting forward some endlessly intriguing and enigmatic ideas.