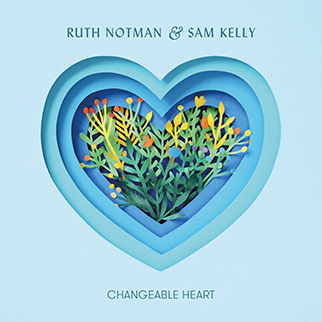 As massive fans of Sam Kelly and in particular his turbo powered folk big band The Lost Boys, his new partnership with Ruth Notman intrigues…

Just a thought, indeed a Karl Pilkington-style moment, occurred that many must have addressed in the past – how do duos go about deciding whose name comes first? Simon & Garfunkel?  Morecambe & Wise? Ike & Tina Turner? The post-Zeppelin Page & Plant pairing occasionally reversed the order but maybe in this case, Sam has acquiesced to Christian name  alphabetical order and possibly good old fashioned chivalry.

Meanwhile, back to the script. They’re a duo who in their solo guise have had more than enough critical acclaim from their peers and the critics but how does their coming together work out? For a start, the association with Pure Records and the Rusby set up automatically  adds a trademark of quality. The album was produced by Damian O’Kane who also adds his signature banjo and guitars, together with compadres Josh Clark and Anthony Davis bringing all manner of musical subtleties to the party. Having followed Sam Kelly for a short while and been seduced by his high octane brand of folk music, it’s a chance to appreciate him in a different guise and while Ruth Notman is a new name, a simple bit of googling and old fashioned ‘asking your mates’ has revealed that those us not in the know may have been missing out on someone who’s caused a few ripples in the folk world alongside an ongoing professional career.

The album brings together original songs and new arrangements of traditional folk songs  with  covers of Paul Brady and Ewan MacColl classics, all joined by the thread that is love – no real surprise looking at the cut paper creation used for the cover image. Plenty of both bold and subtle Trad. arr Notman/Kelly/O’Kane arrangements  shows the influence and impact of not the X but the Damian Factor as bold fishermen and cunning cobblers clash with young Brians.  Lots of stereotypically folky “fol de riddle di-do’s” see that aforementioned cobbler taking the lead role alongside a jolly butcher in an innuendo riddled and pacey tale that makes the most of  the whistles of Ross Ainslie. It’s a rare toe tapping opportunity which are at a premium amidst a gentle and placidly  paced set.

My Lagan Love is built  on a brooding atmosphere and is sequenced perfectly before  Ruth’s As You Find Your Way Home, performed as a simple duo although Sam’s  electric tenor guitar playing (borrowed from Damian?) adds another sound that will be familiar to O’Kane watchers. Delicate and poignant, the ten songs ebb and flow in a stately and understated fashion. Boxes are ticked as Notman and Kelly’s Changeable Heart is crafted and created,  aided and abetted by a team who are sensitive to the task. Pure in  sophistication and conceiving a graceful elegance.

Listen to Bold Fisherman from the album: