Home Blogs Russian Alternative Music Round Up – May 2020 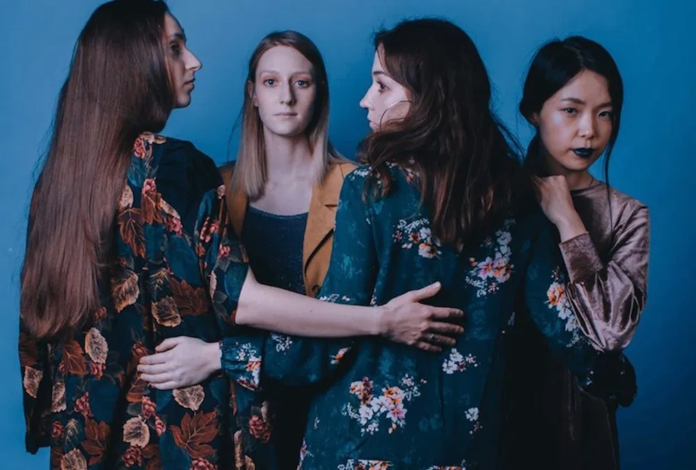 The alternative music scene is always interesting in Russia, with great swathes of new sounds turning up regularly in our inboxes. As many readers will know Louder than War has always taken an interest in what is happening musically in the country. And now these acts are confined to their own countries by COVID, there is a danger that all the groundbreaking touring work done by the likes of Shortparis, Lucidvox and Glintshake is slowly forgotten. We hope not. Russian musicians are insatiable and looking to break new ground, and the new interest from the West shouldn’t just be a passing fad either.

Firstly we can report a recent killer single from Lucidvox, who have recently signed to Glitterbeat records. They’ve always been a tricksy, mercurial band, appearing when you least expect them to with their tough, punked-up Amon Düül II racket. (LTW supremo John Robb and me first tripped over them, literally, at a show in a mediaeval basement in Tallinn four years ago, and your correspondent, to his shame, ended up necking a bottle of vodka with them in that capital’s “historic Old Town Square” shortly afterwards.) For those who don’t know them yet, ‘Knife’ is a classic Lucidvox cut: replete with raga vocals and a revolving set of chord changes and time signatures. And, as ever there is a creative (audio, visual) tightrope thrown between their everyday lives as modern day Russian girls and their fascination with the aesthetic of Old Muscovy. Though the video for this new track is pretty self-explanatory and reminds me of the odd Mirrored Lips video.

Moscow’s Dmitry Peitsch has a new project called Dervish Taxi; out on a tasteful local label, Fancy Music. Peitsch is known in the Russian alternative scene as the maker of some scratchy, sketchy dance music as well as psych rock with Motherfathers. This project’s new album, Round One – with drummer Yan Yamin – presents a set of loose and luscious ‘dude’ prog jams that wend their way through a whole host of moods and attitudes. Highlight for me is the 26-minute funk-frug out known as ‘Bag For More’; it’s really relentless and once you give the track the requisite space you can get lost in its gradually unfolding jams. One or two of the zoned-out tracks also put me in mind of the prodigious output of The Mars Volta’s Omar Rodriguz Lopez. It’s probably the headspace invoked, more than anything.

Another great Moscow label, Addicted, is run by Oleg Dynya, Ivan Bredolog and Anton Kitaev; who never stop putting out great stoner and psych records. This one, the third (self-titled) long player by Saint-Petersburg’s Juice Oh Yeah is a belter that swerves unsteadily between maximum Wooden Shjips fuzz-outs and Axelrodtastic Electric Prunes pop. It’s a moreish record, and they sound a very, very assured group. The video of the whole LP (with some knockout “skin up, la” visuals by Alexandra .noa) is here.

“Peter” (as the city is often dubbed by locals) has a strong alternative jazz and fusion scene and one new record is are worth talking about here. It’s from Yojo, a shifting group of musicians based around Alexey Borovets. They have their third LP out, called The Stepson. Yojo make poppy soundscapes that somehow unsettle you; there is always a feeling that the smoothness of their horn-heavy sound will reveal something grubby or ill defined. As such, you can get sucked into their worldview and feel the intellectual pall of Saint-Petersburg swirl around you like a mist. The patient, sometimes downbeat progressions and clever little hooks and licks scattered throughout also remind this old fella of The Blue Nile, god knows why. Regardless; this is one of those strangely enjoyable records that – if you give it time and stop saying to yourself that you’ve heard this all before – will start to make serious inroads.

Back in shiny, ever-new Moscow, Jenya Gorbunov has a remarkable new record out called Action on the Incompetence label, based, in the main, round samples of his voice. Gorbunov is a driving force in the New Russian Wave (courtesy of his work in Glintshake,  Inturist and Interchain) given his seemingly never-ending desire to make art in some form or other. Just like his band mate and creative sparring partner, Kate (NV) Shilonosova. Yet again he delivers a Chagall-like dreamworld in sound which seems to concern a day going out of the house and back again. The video for the first single ‘Ext. Gas Station’ (illustrated by Gorbunov) is also mental, but – as ever – brilliant, in a way that – typically – you can’t put your finger on.

The Incompetence label have recently released a thumping ambient electro record called Объект и среда (‘Object and Wednesday’) by Gorbunov’s old sparring partner in Interchain, Andrey Lee. The whole thing is a hefty slice of fabulous, forward-thinking glitch and worth your time if you fancy diving into a set of random abstract beats and samples.

And the brightest star in the city, Kate Shilonosova – in her guise as Kate NV – has a wonderful new LP, Room For The Moon, on the way. That’s released on the hip RVNG label in June. In the meantime you should dig her first single from it, ‘Sayonara’ which is a beautiful contemporary pop record and probably her most accomplished work to date.

Elsewhere mysterious sound rebel Zurkas Tepla has an intriguing new label project; CANT on the cards, with three releases on their way. We are looking forward to talking about them here pretty soon. I can let you all know that it’s epic stuff. For now we can share his recent cover/butchery (your choice) of The Clash’s ‘48 Hours’ on North Yorkshire(!) label Industrial Coast: done in the manner that only he knows how to. There is also this mysterious video from yer man Tepla to be confused by.

The RIG is a brand new project featuring Dark Jazz sax beast, Sergei Khramtcevich (there are a number of sax beasts in Moscow, and the thing known as Dark Jazz may or may not exist, it’s all very confusing). Anyway… The RIG are great, a mostly un-amplified, “bastard mix” of klezmer, improv and urban jazz. Their first single is here (woefully underwatched by the world it seems, given the YT views). It’s a super prospect.

By total contrast Vanya Limb has made a record designed to assuage rather than enervate the senses. If you need to dive headlong into an ocean of ambient sound then you could do a lot worse than surrendering to this which has definite shades of Basinski and The Caretaker.

Finally Nizhny Novgorod’s brilliant duo, Crimson Butterfly have released a tenth anniversary record – of sorts – with Caffeine MMXX. True underground scene ravers, the Butterflies kick against the pricks using a fistful of art-forms (masks, fine art, dance music and activism). This fabulously shifty dance remix – and its flip – an uncompromising slice of dubby, avant-garde noise cut live in NN – is the prequel to a new LP, out any time now, called Music Of The Early Gypsum Age. That’s really worth keeping tabs on as the Crimsons are a truly happening, exciting act.