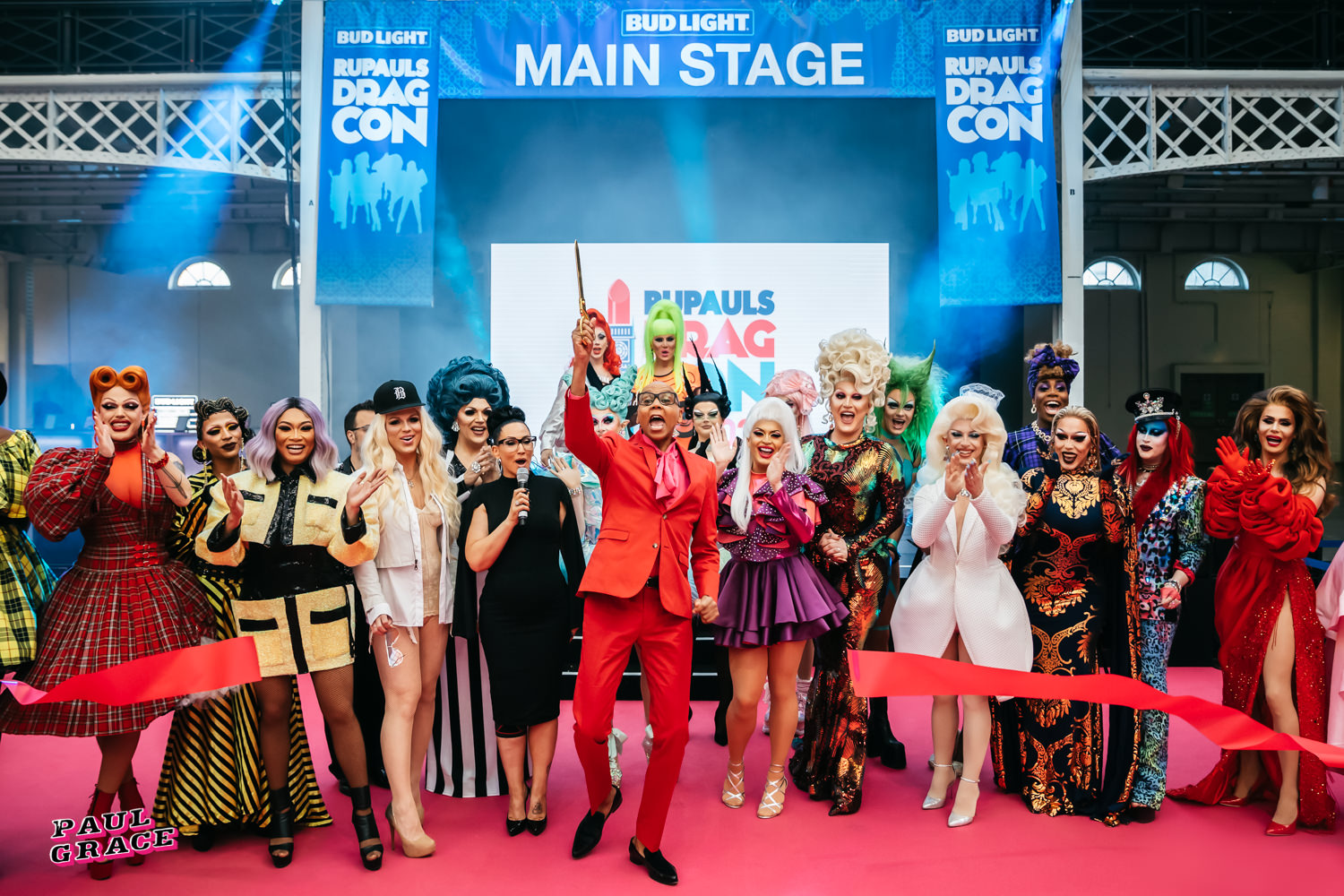 RuPaul’s DragCon came to Olympia London for a two-day residency. In response, Louder Than War’s Andy Duke interrupted his viewing of Netflix’s AJ & Queen to make his pilgrimage to West London for the launch of what will become an annual event and discovered that drag is an extension of punk. 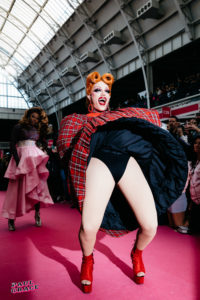 The true spirit of punk is empowerment. The notion of the audience being equal to the performers presented a welcome diversion from the seemingly unreachable extravagances and self-indulgent musicianship of 1970s prog and stadium rock. And, nearly four and a half decades on, punk’s spirit is well and truly embodied by today’s Drag Queens (and Kings). While large venues like Olympia London and corporate sponsorship might be seen as the antithesis of all things DIY, DragCon UK can still deservedly be called punk as fuck.

A Queue to the Ru
Although RuPaul’s fantastic and decidedly dragtastic circus was not unscathed by bad publicity during its two-day London residency, I am not going to concentrate on the issues surrounding oversubscribed ticket sales and marathon-length queues. These have already been focused in great depth by the mainstream press who, in the eyes of this reviewer, have jumped on the negativity bandwagon without also acknowledging the great aspects of the event. And the event was great.

One Small Step For Drag – One Giant Leap for Person-kind
RuPaul’s Drag Race has brightened our television screens and enriched our language for nearly 11 years. Although it might feel that humans have taken a few steps backwards in light of the current political events on both sides of the pond, the growing popularity of this programme and the capacity crowds at DragCon UK represents society moving forward in a very positive way. In addition to empowerment, Drag also represents escape. Similarly, the normally clinical and uninspiring space that is Olympia London was, metaphorically speaking, transformed into a greenhouse of exotic blooms you don’t get to see on a daily basis. And, to say that the admirers of these ‘blooms’ were diverse would be an understatement. The demography of the attendees can be best described as simply ‘fans of drag’ and the vibe felt nothing less than inclusive and non-judgmental. From parents and their kids sporting matching drag-themed t-shirts to older straight couples wanting to meet their favourite drag stars, DragCon London was a utopian microcosm of everything that is great about modern liberal society. It’s not about sexual preferences, gender identification or age but, simply put, represents one world united by a love and respect of fierce drag queens. And it’s a world I’m proud to be a part of.

A Royal Procession
The event kicked off with a procession of Drag Race royalty, both past and present, strutting their Courage, Uniqueness, Nerve and Talent along the pink carpet. Not since Elizabeth II attended her 60th Jubilee have I seen a crowd so royally charged to witness the spectacle of queenery. I was initially (and very wrongly) apprehensive that the participants from Drag Race UK might not receive the same fanfare as their American counterparts when displaying their fierceness. This is not to say that our very own stars of drag aren’t worthy of equal adoration, because they really are, but the British version of RuPaul’s franchise was housed in a remote streaming-only outpost of the BBC and I feared this might limit its appeal. How wrong I could be. It was great to see UK finalist Baga Chipz receiving the same massive fanfare as US Series 8 winner Bob the Drag Queen and lapping up every minute of it on the carpet. It then struck me that, to this crowd, every drag queen taking part is a winner be it Ongina from Series 1 or any ticket-holding drag artists who were attending the event. This is where the true punk spirit of DragCon resides. Proving the point that the audience can be stars in their own right, the mainstage was open to anyone to get up and strut their stuff in between the scheduled acts. While Top 10 tunes were being blasted from the PA, attendees got up and made use of the stage however they saw fit. From throwing shapes, doing death drops, emulating the iconic dance moves from Paris Is Burning or just using the moment for a special selfie – what struck me is that the audience were highly responsive to these impromptu performances from fellow attendees. And the applause was both generous and regular.

Empowerment To The People
Inspiration and empowerment were the key messages of the event. The fact that at least a quarter of the attendees were teenaged girls who find power and strength from their drag queen role models is a testament to this. And, despite the costly glamour on display, there is an underlying ‘you can also do this’ message to every aspect of the event and, on a much larger basis, ‘the scene’. For example, on YouTube, there are hundreds of drag queen hosted tutorials covering everything from make-up application to wig maintenance. One of the brightest exponents of this is Series 10’s Miz Cracker, who eloquently provided sage-like advice before a standing-room-only crowd at her amusingly titled Jewtorial in DragCon’s Shade Room. While the Seattle-native is a fine speaker and projects better than most rock singers, I was disappointed at the sound reinforcement on offer. The PA just seemed underpowered for the size of the room. The same issue plagued the neighbouring Tea Room in which Drag Race UK’s Baga Chipz and The Vivienne’s bar-raising impressions of Margaret Thatcher and Donald Trump were respectively difficult to fully appreciate because of poor sound. Did the audience mind? The ones who managed to get in, and there were hundreds who couldn’t because of over-subscription, were just content to be in the company of these fabulous beings. In terms of achieving a broader sense of empowerment, it’s a shame that Drag Kings were not featured at DragCon UK. That said, I fully appreciate that drag is an ever-evolving entity and that their inclusion in future events is highly likely. The fact that a talented and fierce Drag King, Landon Cider, was recently crowned the winner of the third series of the Boulet Brothers’ Dragula is a proof of drag’s forward-moving trajectory.

Shantay You Pay
In addition to the panels, which covered everything from celebrity interviews and drag makeovers, the family-friendly event allowed fans the opportunity to meet their favourite queens in person. Scattered throughout the venue were beautifully decorated boudoirs where attendees could queue up and have a brief moment with some of RuPaul’s most popular stars from Drag Race US & UK. The queues for these one-to-one meetings were immensely long but illustrated how passionate fans can be. While some of DragCon’s detractors may be critical at the costs for having selfies taken, let alone signed headshots, I feel it’s important to report that they’re commensurate with what is charged by celebrities at events like Comic Con or at Sci-Fi Festivals. Proof that the cost and demand were (and are) well-balanced is that Bianca Del Rio’s booth managed to shift hundreds of her branded t-shirts before the Series 6 Drag Race winner even arrived at the venue. There were also many ‘Drag Race-Adjacent’ celebrities in dedicated booths including Jodie Harsh and the cast of Family Makeover. And, while taking in the many drag-friendly retail concerns offering everything from teeth-whitening to wigs via lashes and accessories – I spotted many celebrity fans of Drag Race including members of Great British Bake Off who were more than happy to have selfies taken with fans without charge.

While DragCon UK resides comfortably in the corporate event category, the spirit of what inspired RuPaul’s vision is anything but. Depicted beautifully in the aforementioned film Paris Is Burning, what took place in the Harlem ballrooms in the 1980s was down, dirty and decidedly DIY. While Olympia London is none of these things, the dynamic of ordinary people doing extraordinary things via the conduit of drag is about as punk as it gets. And attendees championing their own kind onstage is a testament that there’s no barrier between the stage and crowd. Just inspiration. The same can be said of what transpired at CBGBs in New York City in the mid-1970s or at punk pubs and clubs all around London during the same period.

Attending DragCon felt like a holiday away from the harsh daylight reality of the real world. I felt a kinship with all the attendees and the positivity of the atmosphere and sense of empowerment have stayed with me. It sadly isn’t the real world. But one that I was glad to have visited. Yas Queens!

All photos ©Paul Grace, for more of Paul’s writing and photos go to his archive. Paul is on Facebook, tweets as @pgracephoto and his website is www.paulgrace-eventphotos.co.uk & www.pgrace.co.uk