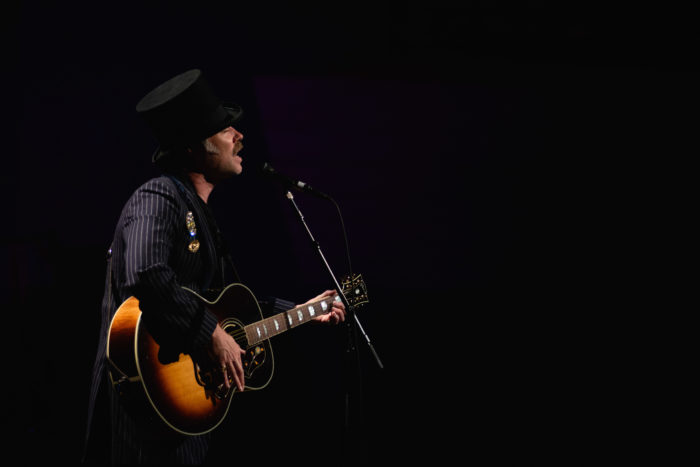 Rufus Wainwright proves once again why he’s seen as one of the greatest singers, songwriters, and musicians of his generation. It’s a shame that the venue doesn’t live up to this ethos…

“Tonight, we’re celebrating 25 years of my career” Rufus Wainwright pauses, takes a long breath and says, “which is juuust great.”

The bearded singer, who looks more and more like Rufus Hound as the years wind on, delivers another one of his famous quips. The auditorium of Manchester’s Bridgewater Hall laughs along in unison.

It’s the crispest sound of the night.

True, that this night was about celebrating Rufus Wainwright’s career – with specific attention to his self-titled debut, and the highly-acclaimed follow-up, Poses. And it was, for the most part, great.

Rufus is a born showman – that there is no doubt. Of course, being born into a famous musical family that teeters on a dynasty probably doesn’t hurt.

The fact that, as he tells us, he’d become, “obsessed with opera at age 13” to the point that he was writing arias come as some indicator as to how theatrical this sort of show is.

For starters, Rufus enters the stage in a pinstripe suit and jauntily placed top hat in a nod to vaudeville. He then transforms himself throughout the show with an array of capes and outfit changes. For a sickeningly talented musician – there’s way more to this than music. It’s theatre, darling.

And true, like theatre, the set is well rehearsed and flawlessly executed. The band move around in unison from one instrument to the next as capes and hats are passed around between songs. The operatic background of the team is obvious, but the lights are on, and are made for, Rufus – and Rufus alone.

Bouncing from the piano, to the guitar, to the lonely looking microphone in the centre of the stage, Rufus’s set is one of ebbs and flows.

From the bombastic, to the quiet, to the cheeky – song by song by song. We ricochet from Beauty mark to Sally Ann to first set closer Sword of Damocles with a brief stop at Joni Mitchell’s Both sides now. After the break, the band tackling Poses with Cigarettes and chocolate milk, California, One man guy and more.

A note on sound…

This is the fifth electrified band I’ve seen at the Bridgewater Hall, and the fifth sound disappointment. Let’s be frank, this place was built for acoustic music. A visit to any one of the Halle shows will prove that. It sounds fantastic.

But for a band like Rufus’s, or any act that requires an amplified sound, this venue is just bad. I thought that at the first concert I saw here six years ago, I think that at the fifth amplified concert now.

The drums envelope everything. The bass is barely audible. And when all five vocalists reach for the unified finale in what should be a cacophony of melody, all I hear is white noise. It’s not their fault, nor is it the soundman’s. This is just the wrong venue for amplified music. Pure and simple. Maybe it’s about time that the Bridgewater Hall started recognising that? Stick to what you’re good at.

Acoustics save the day…

Thankfully Rufus Wainwright spends considerable time behind the Steinway grand in the middle of the stage. When he does the venue can breathe. The sound cuts through. Everything is still.

It’s here, at his most naked and bare that Rufus manages to turn the venue into his own – reaching for high notes that most singers his age duck out of. Even if he doesn’t always get there, the showmanship and theatre of it all encompasses everyone in the seated auditorium. Even a few bums rise off seats.

“It’s very difficult to draw the line between the past and the present,” he says a song or two from the close, clearly struggling with the emotional complexities of singing his debut material 25 years down the line.

But, like theatre, it’s clear that no matter what happens over the next 25 years, Rufus’s show will go on.

Photo by Adam Roussak. To see more of his ace work, click here.