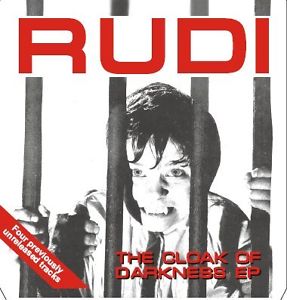 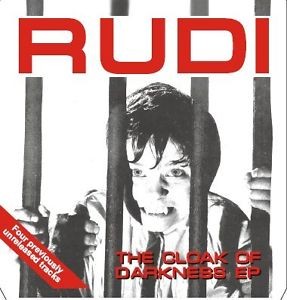 Spit Records have confirmed the release of ‘The Cloak of Darkness EP’ from Belfast legends Rudi; the EP features four previously unreleased tracks which were recorded in back 1980.

Rudi epitomised the sound of Northern Ireland punk; because of the then political situation Northern Irish punk was cut off from the UK and so developed its own sound; a sound that was captured via Good Vibrations Records; The band’s debut release was the “Big Time” 7″ single, the debut release for Terri Hooley’s Good Vibrations label in May 1978. It received positive reviews in the music press, and was later described by Henry McDonals of The Observer as “one of the most perfect pop songs to come out of this island“.

Rudi were blighted by bad luck; band members were jailed’ promised record deals with Uk labels failed to materialise, they were even offered a contract by Pete Waterman who at the time was working for Ariola Recordsa, they turned this down and went with a label funded by Paul Wellar subsequently scoring a ‘Single of The Week’ for the track ‘Crimson’, success didn’t follow and the band called it day.

‘The Cloak Of Darkness’ was been pressed up on 300 numbered copies only, so order now to avoid disappointment