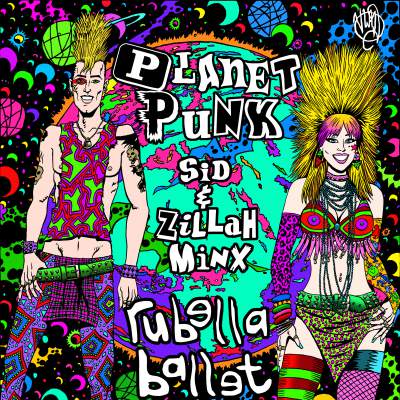 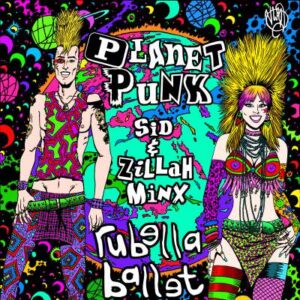 Rubella Ballet released their first single ‘Ballet Dance’ back in 1982 and also in the same year released their debut album, ‘Ballet Bag’, a creatively packaged cassette only album. They released a further two studio albums and four singles as well as various compilations. This is their first album of new material since 1986’s ‘If’.

I recall seeing Rubella Ballet many years ago, and to refer back to Steve Ignorant’s quote; he is spot on…I first saw Crass in Liverpool in late 1980, caught them on a few occasions up to 1984, again in Liverpool and also in Manchester; whilst the gigs were exciting, for a 17yr old attending what was essentially a political rally Crass didn’t always appeal, distractions such as beer, and girls stunted my political awareness – Rubella Ballet however at least delivered their equally charged message with a smile on their faces, so when ‘Punk Planet’ arrived I was keen to discover if they had maintained that stance; reading through the sleeve credits they have certainly maintained their independence – now a two-piece of Sid and Zillah; Sid composed and performs all the music, he also engineered and produced the recording then wrapped it up neatly in a booklet he also created, Zillah being responsible for the lyrics and vocals…

Opening with ‘Planet Punk’ it’s immediately obvious that Rubella Ballet have dramatically altered their sound from that of their inception; we get a robust, propulsive cyber-punk backing whilst Zillah nails her colours to the day-glo wall, before vocal samples from 9/11 news reports open ‘All Potential Terrorists’ a savage critique of the US Administration version of events built around an insanely catchy semi industrial guitar riff, and multi-track vocals – the inspiration for the lyric stemming from as a chance meeting with two whistle-blowing MI5/6 agents who had been monitoring their political activities in the 80s and were now working with William Rodriguez, a caretaker at the twin towers who had dedicated his life to telling the world what he believed really happened during 9/11.

‘Run Run’ rails against un-named bankers, and the Government, delivered on a sub Sisters Of Mercy grinding riff with an excellent guitar refrain adding colour, the chanted chorus particularly effective, before the machine driven beats of ‘Killuminati’ the “illuminati” being the target for much of Rubella Ballet’s bile. The entire album is sonically much darker than I expected, and for that Sid & Zillah are to be commended – they are clearly challenging themselves to progress musically but remain true to their ideology, every track questioning; the lyrics are highly motivated and political charged and deal with a raft of subjects such as Government brainwashing, the creation of new strains of flu virus to reduce human population, the police cover up of Hillsborough stadium disaster.

‘Hellbilly Heroin’ a rampant lyrical riposte delivered by Sid regarding his cancer and how prescription medication made him worse while street drugs appeared to benefit him; personally I find the lyrical allegation that chemotherapy is a device concocted by “the illuminati” an allegation too far, but then I fortunately I have not been diagnosed with cancer…

The entire album is built around layers of unrelenting, uncompromising guitars, underpinned with machine driven beats, angry multi track vocals, samples of news reports, gun fire and football chanting – over the fifteen tracks (CD version) it becomes a little lumpen, perhaps a touch self-indulgent, but it’s apparent that Sid & Zillah have not lost an iota of their passionately held beliefs – on ‘Punk Planet’ they are reacting to the modern times ; whether you agree with their viewpoint or not they deserve credit for continuing to question the society in which we all live.