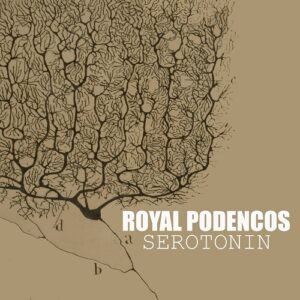 Based out of Santander on the north coast of Spain, Royal Podencos have, for the last decade or so, carved out their sound by bringing together glam stomps that they filter through a crunching garage sound and a blend of powerpop melody. Now, they’re back with their new album Serotonin and have returned with their best album to date. The enforced downtime has clearly given them time to really focus on developing their writing chops and the space to more clearly define where they’re coming from. It’s evident right from the off on Someone, the track that they announced the album’s release, harking back to that turn of the millennia’ new garage style that simultaneously harnessed the indie dancefloor vibe and showcases immediately the step forward in confidence from their previous album.

They’re a band at times clearly indebted to Julian Casablancas and co. and nowhere is it more well done than on the fantastic Milky Way, one of the standout tracks of the album that sees singer Hans Eguinoa crooning lackadaisically over some great and simply effective guitars, held together by the constant beat and bass. It’s the band at their finest. And, just like those skinny-jeaned fashionistas did, the band hark back to the same 70’s New York Dolls’ cool groove, that moment where glam bled into pre-punk, took a cynical look at rock ‘n’ roll excess, spread its sound across to the West Coast and out of the speakers of Rodney Bingenheimer’s English Disco. It comes together in a great way here on Gomez Arernal, complemented further by a sweet harmonica line. At times though, like on Maybes and Self Control, they pick up the pace more, the latter sounding like a lost Room On Fire outtake that should never have been left on the cutting room floor.

As Royal Podencos move through Serotonin, they rise to rocking heights, drop down to more plaintive melodies that soothe over the crunching guitar lines, such as on Monsanto and Out On You, which has a distinct Bowie lilt to it. All the while the lyrics skirt somewhere between the tribulations of maintaining relationships, the need for self-reflection to grow, and the recognition of the power of fight over flight to get through struggles and come out stronger. It’s an album that simultaneously oozes with a renewed sense of positivity, definitely something that we could all with a dose of these days.

Serotonin is available to download from the band’s Bandcamp page, or on LP from Family Spree Recordings.