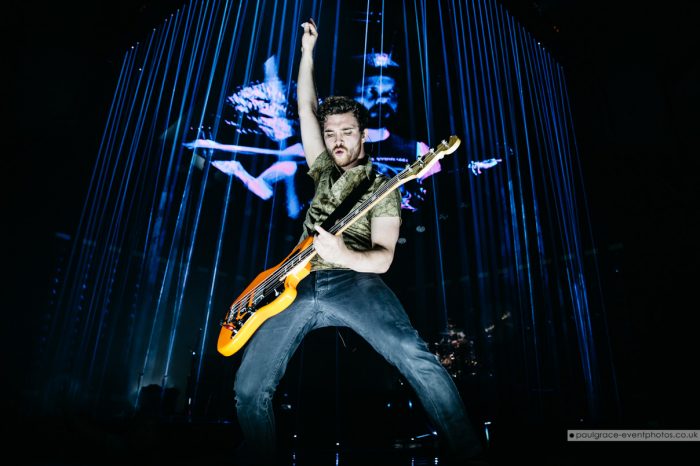 Royal Blood | At The Drive In | Black Honey

Royal Blood recently took over Alexandra Palace for a sell-out three night residency. Louder Than War’s Paul Grace was at the final night and witnessed an electrifying show.

The first time I saw Royal Blood was the BBC’s coverage of the 2014 Reading Festival. They were playing a hot sweaty tent in the middle of the afternoon and I was in complete awe of the scale of the sound that the two members, vocalist/bassist Mike Kerr and drummer Ben Thatcher, were able to create. It was perhaps this performance that also opened the eyes and ears of the masses to their fresh gargantuan rock sound – like a cross between The White Stripes and Queens of the Stone Age only pumped up on steroids and with a crystal meth chaser. The same year their eponymous debut album was the fastest selling UK record for three years and was promoted by an exhaustive international festival tour.

Fast forward to this year and there seems to be no stopping the boys from Brighton who released their second album When Did We Get So Dark this summer to wide critical acclaim. The supporting tour includes a three night mini residency at London’s iconic Alexandra Palace and I’m here for the closing show.

Tonight there are two supports and the first of which is Brighton quartet Black Honey. Their sound is a curious mix of Americana and grunge with a heavy twist of punk. Front woman Izzy B Phillips is the perfect lead and really knows how to play the crowd. It’s worth keeping an eye out for Black Honey as I feel they’re destined for big things. 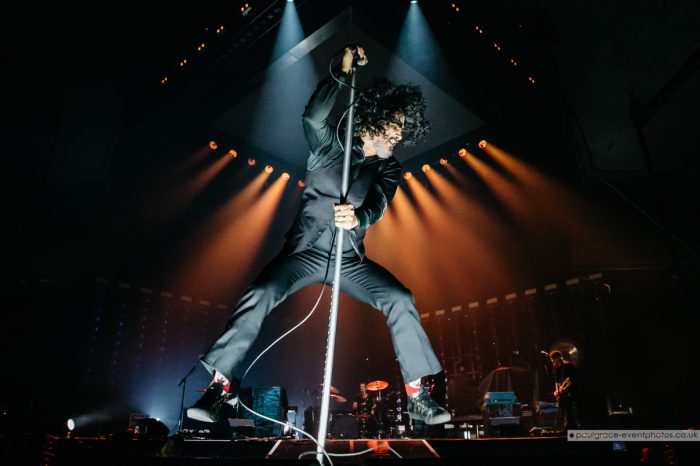 Next up is At The Drive In who take things up a notch and seriously impress with their obscure art-punk set. Singer Cedric Bixler-Zavala (ex-Mars Volta) is one hell of a show man; he screeches like a banshee and throws himself around the stage with a persona that fills the massive room which is a pretty impressive feat for a support band at Ally Pally.

Tension builds as we wait for Royal Blood to play their headline set and just after 9pm the lights dip and 10,000 screaming fans welcome the two piece to the stage. The opening buzz of Lights Out rattles until the chorus finally drops and the room literally explodes in a goose-bump inducing fusion of noise, light and colour.

Between tracks Kerr is a man of few words but you don’t really need to say much when you can make your bass squeal like a jet engine. Vocally he hits all the notes with ease and every so often gallops up the runway to pull some awesome textbook rock-star poses. Thatcher smashes the drums like a man possessed and together their muscular wall of sound is fully immersive and utterly mind-blowing. 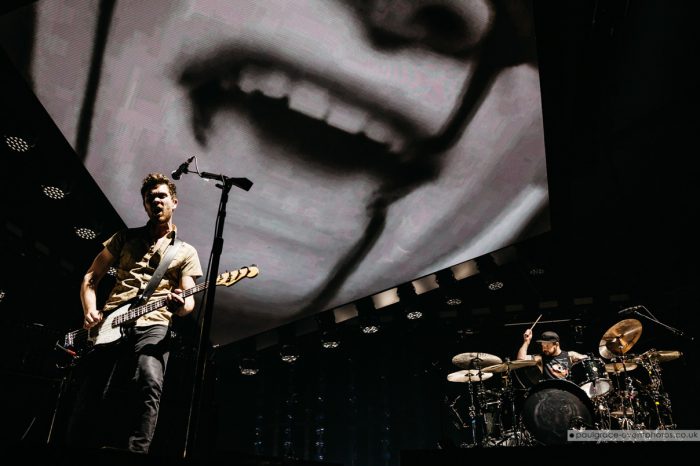 The stage set is stunning with a multicoloured laser cage, tripped out lighting, massive video screen and a runway that disappears part way into the room. It’s hard to pick a highlight but Little Monster and final track of the night Out Of The Black were both pretty special.

This was the first time I’d seen Royal Blood and their electrifying performance did not disappoint. Some critics have said their sound is now too commercial but the show was fresh, thrilling and actually felt very raw. Yes Alexandra Palace is a daunting space to fill but the tsunami of sound that the boys created well and truly blew all the cobwebs away and I’m actually stunned that the building is still standing.