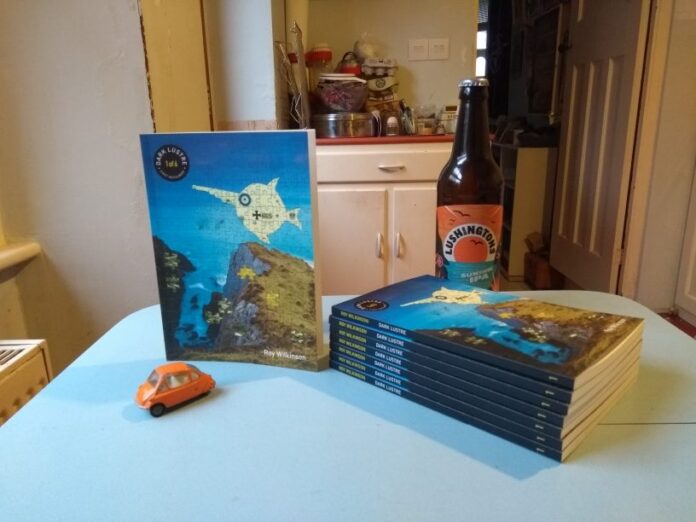 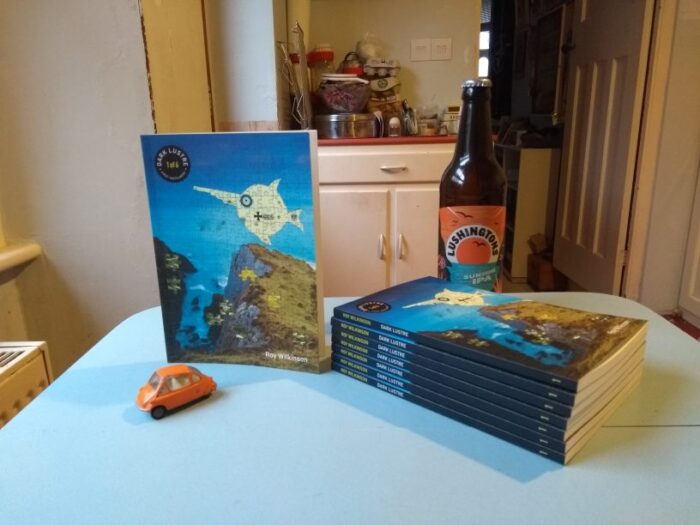 Roy Wilkinson is a writer, manager, broadcaster and general man of letters who lives in Devon. Some may know him as Old Sarge, one-time manager of the legendary psychedelic lunatician rock band, British Sea Power, in which his brothers Scott and Neil play. Yet others may know him as the author of Do It For Your Mum, a chronicle of said band and his family. And soon some others again – a hardly few, given there are only 667 of the bloody things – will know him for Dark Lustre; a quickly paced narrative based around a ridiculously hip band, a search for Nazi gold (and its inevitably attendant queasy legacies), dead birds, trips to Germany, and goodness knows what else.

On the strength of these two titles, those 667 readers are in for a treat. The author’s move away from entertaining with personal histories and anecdotes, Based. In. Reality. For. The. Fans. in Do It For Your Mum towards a pure form of escapist fiction, is more than entertaining, it’s inspiring. Writing a novel in instalments, Chas Dickens-style, seems to have freed Wilkinson up. Do It For Your Mum, albeit a very entertaining book, now feels like a test run, where matters of record had to be sorted and put to bed before the serious work of fiction could be embarked upon.

Doubtless Wilkinson has written these six episodes all on his own, without anyone’s help, hunkered down in the West Country during a time where very little was abroad. But there is no doubt that his style and approach is very much what is currently abroad in literary circles. You can think of Olivia Laing’s writing, for instance. Those who enjoyed the snap and skirl of David Keenan’s recent titles, Xstabeth and For the Good Times, or Lias Saoudi’s current golden run of droll confessionals on The Heavenly Social website will also lap these up. Laing apart, Wilkinson has now joined these scions of the tap room, who have been told by their Muses to write down their Homeric ramblings onto paper or get out. It’s what media types currently call “a thing”. A trend.

But a good one. As Dark Lustre is another semi-confessional, witty, intelligent alternative history that sets a counter narrative to Johnson and Co’s moronic, blustering kulturkampf. The sort of escapist effervescence that we need gallons of.

Even if a little outré, Wilkinson’s prose is waspish and exuberant, and sometimes illuminating.  Conceits are there to spot; name drops, half references and bon mots all there to give you a reassuring clap on the shoulder. And it’s all fun; although the large typefaces that pop up regularly remind me of another contemporary male author, Iain Sinclair. But though both Sinclair and Wilkinson love using Reg Smeaton-like facticles, there is none of the ponderous, slightly laddish autodidacticism that is found in London Orbital or Lights Out For the Territories. Learning about “things” in Dark Lustre isn’t like watching a YouTube video on how to change a tyre on a 4×4, in other words.

Sometimes this approach can get to the heart of things in a way that straight talking just can’t. This passage – I can vouch, despite its initial appearance as doggerel – is possibly the best description of trying to prepare a rock and roll review in your head. It also reeks of the transience of such thoughts, the moments when a whole new way of explaining rock and roll, or music – and its relation to quantum physics or Wellington’s use of his infantry at Waterloo – is in your grasp only to disappear without trace after you’ve come back from the jakes to find a new pint waiting for you.

Possibly the best thing of all about Dark Lustre is the author’s steady control of the narrative. Nothing feels out of place, despite the distinct feeling that we are sometimes taking a trip round the nether realms of Wilkinson’s mnemonic archive. This is done by switching the plot through a compact number of characters, keeping them moving towards their particular destinations and drawing them together with themes the reader is actually quite curious about. It’s old fashioned storytelling in other words.

Dark Lustre is only available from: https://www.roywilkinson.co.uk/