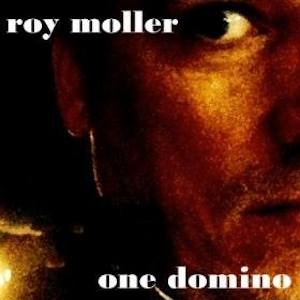 “I’m addicted to her like I’m allergic to gin” croons Roy Moller on “Honey Berlin”, the opening track of One Domino, an album that’s as intoxicating and compulsively habit-forming as the “blue ruin” which brought Victorian London to its knees.

Dunbar-based Moller is in bold, expansive form throughout this instant classic, flirting with the decadent myths of 70s Berlin on the compelling opener, evoking eerie Cold War dislocation on the driving post-punk of “Edinburgh City Control”, and morphing into Iggy Pop fronting a Kim Fowley-esque psych-country gallop on the weirdly triumphant “Vincent”.

Throughout, his guitar-playing is louche and unfettered, with the spontaneous swagger of John Lee Hooker spliced with the dissonant thrills of mid-70s New York and Berlin Bowie. Moller’s lyrics are intelligent and witty, studded with intriguing cultural references. This makes the experience of listening to One Domino akin to watching a particularly fine episode of Mad Men, as the listener is sent scurrying to Wikipedia to unpick the threads and trails.

While the album crackles with scuzzy post-punk angularity, it also encompasses seductively beautiful psych-pop slow-burners. “Redpath” is gorgeous, folksy gospel-delia and features the arresting and multi-layered line “A Protestant looks at Catholic and sees a world of magic”, a quote from the song’s inspiration, the Scottish artist Anne Redpath.

“Where I Am is Here” starts with a blast of gritty-glam blues-riffing before twisting into a beautifully melodic and romantic evocation of old Edinburgh and Leith. It’s another stunning example of Moller’s world class song-writing and a reminder of why BBC6 Music’s Marc Riley dubbed him “Scotland’s best-kept secret”. Elsewhere, “When I Paint My Mantlepiece” (sic) combines skewed freak-folk with flashbacks of Neu! and The Red Krayola, while “Obelisk” would sit perfectly on one of Julian Cope’s early acid-fried albums, its catchy pop hooks snaring the listener into a surreal parable of awkwardness.

Awkwardness and how to slip its shackles is a recurring motif; the strutting rowche rumba of lead single, “Street Oblique” encapsulates this theme musically and lyrically, as Moller surges into full-on Billy MacKenzie mode to deliver subtly loaded lines like “I could never dance through life, for fear I might land on a knife”. This flamboyant cat-walk around the edge of the void is punctuated by guitar spurts and squalls worthy of the late Robert Quine, the volatile, visionary guitarist of Voidoids and Lou Reed infamy.

Another potential single, “Textbook, Textbook” bristles with spiky guitar and observational lyrics that make the connection between New York cool and Edinburgh post-punk wit. Its recently dumped protagonist could well be Waldo Jeffers, relocated in time and space to Scotland’s East Coast in the present day.

The country-tinged title track closes the album on a wryly contemplative note. Moller’s tangential musings on the Cold War-birthed Domino Theory reference Operation Eiche, the airborne rescue of Benito Mussolini by Waffen-SS commandos, en route to a tender and reflective conclusion on the frailty of human endeavours, forever prone to unravel due to chance factors.

Moller’s personal experiences of disability underpin the butterfly-bursting-from-its-cocoon feeling which permeates and links together the kaleidoscopic pop experimentation of One Domino. Throughout, Moller deploys his encyclopaedic knowledge of pop culture and razor-sharp wordplay to delightful effect; rather than going down the path of arch smart-arsery, One Domino is infused with playfulness and the inviting, sexy swagger evoked by Honey Berlin’s glamorous moniker.

Perhaps the closest comparison would be a post-punk Dylan, spiked with the literate poetics of Lou Reed and Richard Hell. Following the recent devastating loss of Lou, there’s a vacancy for Poet Laureate of the misfits and outsiders; with One Domino- a strong contender for Album of the Year- Roy Moller has just staked his claim.

All words by Gus Ironside whose Louder Than War archive is here.