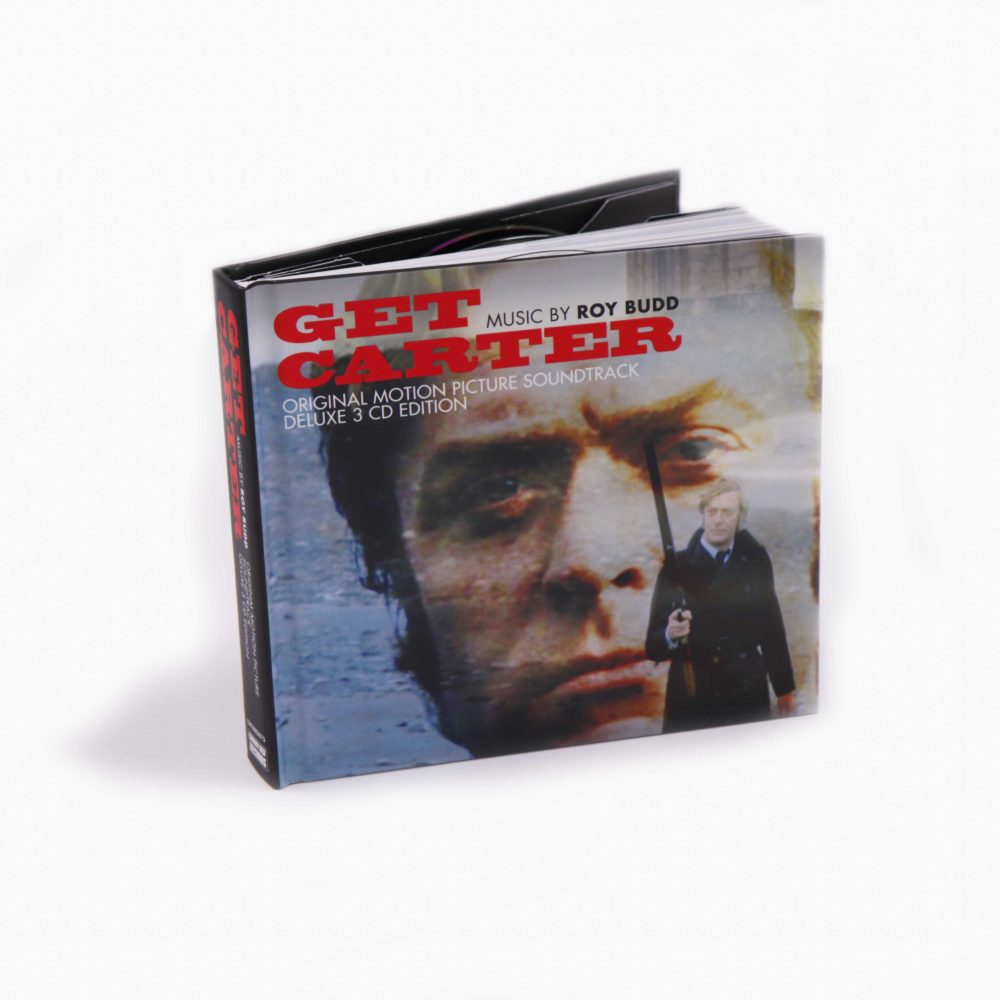 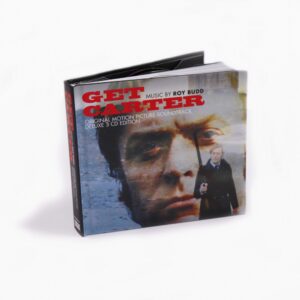 Simply the greatest original soundtrack album ever – as far as boys of a certain age are concerned – says Ged Babey, a man with eyes like piss-holes in the snow…

“Take your bra off…”

‘Get Carter’ was first shown on TV in 1976. I was 12, so it’s perhaps not surprising that Britt Eklands famous scene is one of the first to spring to mind, along side the beatings and the brutal climax.  The deliver of the dialogue is as memorable as the action, and the music was perfect too.  Get Carter is the full package. Influencing a whole raft of later gangster movies, including Tarantino’s oeuvre.

The music too has been inspirational to many bands & artists, both trip-hop and garage-bands, notably perhaps Barry Adamson and Portishead.  The main theme has been covered by the Flaming Stars, Jah Wobble, the Horrors and others.

A feminist reappraisal of the film would conclude that Get Carter is deeply misogynist. Because it is.  But it is still a great movie about revenge and the male ego (and not a guide to how to live your life).

The book, which is part of the CD package has ‘a new, 15,000 essay from film soundtrack writer Charlie Brigden’ and contains everything you need to know about the novel (Jack’s Return Home), its author  (Ted Lewis), the adaptation for the big screen and of course the soundtrack and other work of jazz genius Roy Budd.

The musicians performing the music included members of the Dudley Moore Trio and a future collaborator with the Clash and Blockheads, Mickey Gallagher.

This new and improved edition of the original GET CARTER soundtrack offers three CDs of music from Roy Budd – the first two devoted to the film’s soundtrack with a stack of bonus tracks and the third to the best of Roy Budd’s other scores.

Released in 1971, directed by Mike Hodges and starring Michael Caine, the film has grown in stature over the years – fuelled in great part by the amazing soundtrack by British jazz maestro Roy Budd. From the opening bars of the ‘Get Carter’ theme, the music underpins the tense drama, endorsing an atmosphere which was both thoroughly British while also reflecting the more sophisticated urban landscapes portrayed in ground-breaking US films like The French Connection.

Disc 1 re-presents the original soundtrack, with the addition of ‘Hallucinations’ (which graced the soundtrack but not the LP). Disc 2 combines other incidental music from the film with single mixes and remixes and other rarities. And you can hear soundtrack highlights from the likes of Diamonds, Fear Is The Key, The Stone Killer and The Black Windmill on Disc 3.

So much of the music I write about could be described as ‘cinematic’. but this really is.  It brings together the movie score, jazz and a vibe which is sinister, yet pop, and has influenced music makers from  ‘post-punk’, dance music and miscellaneous, ever since. It is British but international. Of it’s time, yet timeless.

There are a brace of ‘modern’ remixes of the main theme: Dope On A Rope US Remix, De Few 2 Smoking Barrels Remix, Deadly Avenger and  Breakneck Dirtbox – most of which retain the vibe, the first three are great but the last spoilt by expletive heavy dialogue from another movie altogether ( or the re-make possibly, which i haven’t seen to be honest.)

The original soundtrack to Get Carter includes some songs, like the sublime ‘Love Is A Four Letter Word’ ( and ‘Looking For Someone’ and ‘Getting Nowhere’) which out of context are seemingly flimsy pop songs – but given a gravitas and sense of purpose by being part of the movie score. (Then again, there are probably loads of Seventies chamber-pop which is just as good and worthy…)

The third disc is a treasure trove, as if you haven’t seen the movies, the music is stand-alone, fabulous  funky, jazzy, moody instrumental stuff, which is just irresistible to real music-heads rather than just cinephiles.

It’s impossible for me to write about this wonderful boxed set with any objectivity as it is a part of my (bad) education and life – from watching the film as a kid – and then an adult and hearing the influence of the music over the decades,  Seeing the Flaming Stars re-interpret the theme live in the 90’s and much later Wobble doing his version…

Get Carter and great film music in general will always remind me of my good friend Philip Smart, who died seven years ago today, before he reached 40. He was a movie buff and I loved (punk-derived) music, yet we bonded over stuff like John Barry ( I played him Magazines Goldfinger and James Taylor Quartets Money Spyder LP and we were friends for life) and he introduced me to the world of film music, new comedy… we disagreed on loads of stuff but laughed a lot and agreed wholeheartedly on certain things like the greatness and majesty of the Get Carter soundtrack.

Phil would’ve, I know,  dared me to open this piece with the quote I used. And he would’ve insisted that I end it with…

Three CD’s of classical music used in films like the Godfather, A Clockwork Orange, The Ipcress File, The Man Who Fell To Earth. Privilege – by composers like Mozart, Beethoven and Handel  – and a superb collection for people who like their 60’s/70’s pop-cultural celluloid and appreciate the part the music played.  You could say it’s a kind of bluffers guide to Classical  – or an entry-point to the world of orchestral and/or cult film music – but it can serve as simply a great selection and a break from ‘rock’n’roll’ or electronica.

During The Beatles’ Help! Paul McCartney is miniaturised to the strains of Wagner, while in a dank Chiswick pub cellar, the singing of Beethoven’s Ode to Joy saves Ringo from an escaped tiger. In Hal Ashby’s black comedy Harold & Maude, Harold is obsessed by death, and likes to stage elaborate fake suicides to get the attention of his distracted mother, including an attempted drowning to Tchaikovsky’s Piano Concerto No. 1. During The Godfather, the baptism sequence, interspersed with scenes of the brutal assassinations of the heads of the five families opposing the Corleones is underscored by the intensity of Bach’s organ work Passacaglia in C Minor. On a lighter, note, Michael Caine’s Harry Palmer during the Ipcress File chooses Mozart to cook by, a musical enthusiasm shared by Jean Seberg, immortalised by Godard in Breathless. These are but a few of the indelible scenes complemented by the classical music featured in this presentation.