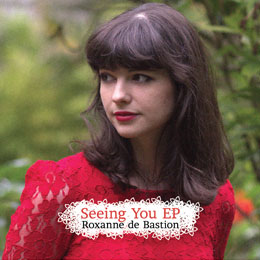 Acoustic music is cool again, guitar shops sell out as fast as new stock arrives, used Hohners fetch premium prices on the black market, every week brings a new tousle haired troubadour boy or feisty minstrel girl and it’s noticeable how many of them claim some sort of artistic kinship with Joni Mitchell. When you come to the music, however, you usually find that the only connection is in the overwrought imagination of their PRs.

So it comes as a pleasant surprise to hit play on a newly arrived EP from Roxanne de Bastion and find that what comes out of the speakers really does recall moments of Joni Mitchell, as suggested in the accompanying materials. Not a clone, though, because de Bastion is a unique performer in her own right with an English accent whose very perfection sometimes betrays the fact that she grew up abroad (she’s from Berlin), but her voice has a clarity and frankness that immediately evokes comparisons with the Blue album. It’s the kind of voice that sounds so honest and guileless it’s almost impossible not to pay it attention, partly because it sounds as though it probably has something quite important to tell you. And it’s very pretty. Elsewhere you can hear other possible echoes of de Bastion’s record collection – Fairport and Sandy Denny maybe, a touch of The Beatles on Same Moon, perhaps even some nineties boy band on Rerun. And why not.

The melodies are lovely, the songwriting is direct and charming and de Bastion manages to avoid the up and coming folksinger’s temptation to waste energy chase after global themes. There are no anthems here, instead she sticks to subjects that are small enough to fit in a song and personal enough that she can sing about them and sound like they matter to her.

Even when she’s wishing that man could learn to trust man again, it’s not just for the common good of all humanity and also that worthy stuff but also, and more importantly, to help sort out her boyfriend problems, which is how it should be.

Album highlight is Wasteland, an elegy to the preserved sections of the Berlin Wall which became the East Side Gallery and which have suffered disfiguring restoration and demolition in recent years. The song has thematic affinities with Big Yellow Taxi and Fahrenheit 451 and the gentleness of the melody and sympathetic production allow de Bastion to give her most expansive and confident vocal of the set, producing an effect not unlike Belfast Central by the much underrated Juliet Turner (which is high praise in our house).

All in all it’s a lovely little collection of songs and Roxanne de Bastion is certainly a name to keep an eye open for in the future.