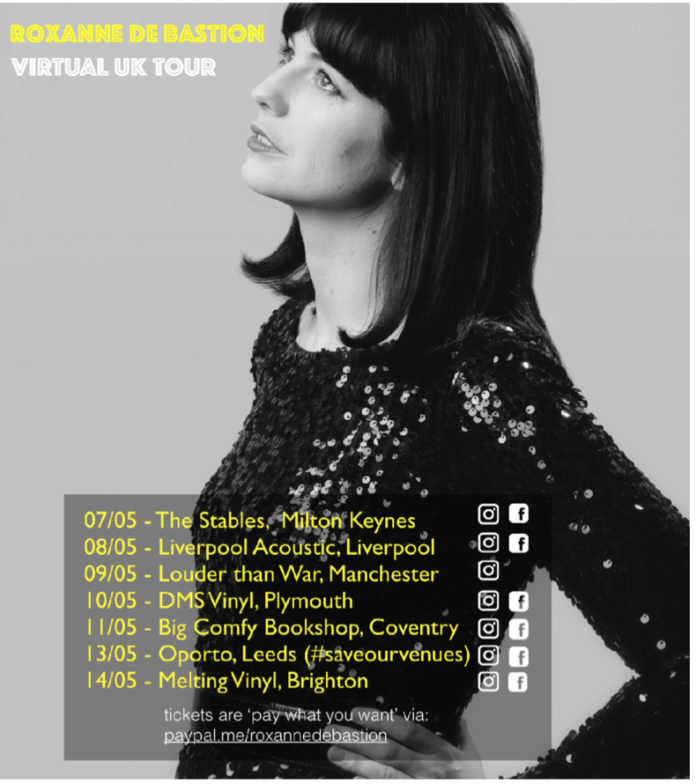 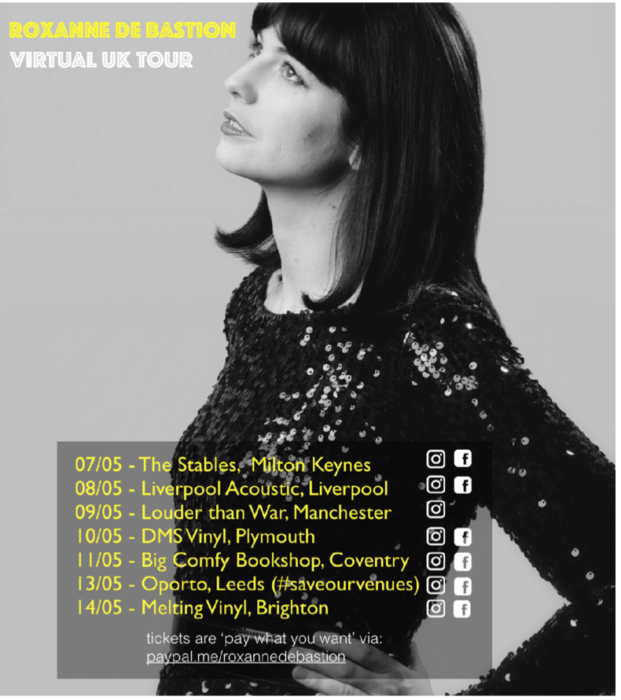 cRoxanne de Bastion is going on tour – without having to pack or leave her house. In light of the current global pandemic, the London based singer songwriter has teamed up with independent venues and promoters across the country to go on a virtual live-stream tour to celebrate the release of her new single, Erase.

Each night of the tour, Roxanne will play a live stream show from her home on the venue’s / promoter’s social media channels. Fans will be able to donate via the artist’s paypal account.

About the tour, Roxanne says “I’m really excited to have found a way to continue working together with independent venues and promoters and hope this will be mutually beneficial. I’m looking forward to introducing my music to new audiences and will try and treat it as much as a proper show as possible. Expect a mix of brand new songs, as well as material off my 2017 Heirlooms & Hearsay album (and maybe the odd cover song so you can sing along from your sofa)”

Roxanne de Bastion’s brand new single Erase is set for release on 6th May. Melodic and beautifully sung as ever, with its primal drums and epic, dramatic strings, Erase is darker in tone and delivery than her previous work, showcasing Roxanne’s ambitious new sonic scope.

Erase can be interpreted both on an interpersonal as well as a political level. The lyrics are a passionate outcry against attempts to rewrite history. Unimpressed with the subjects’ ineptitude and inaction, de Bastion proclaims “you cannot erase it, take it back, extract it from all memory”.

Already a live favourite, Erase is a statement of intent and an exciting first taste of Roxanne’s collaboration with legendary producer Bernard Butler. On working with the revered guitarist, Roxanne cites the 1960s sensibility of his arrangements as a huge draw creatively. About Butler’s production on Erase, she says: “I was blown away when he played me his idea for the string arrangement on this track and was really humbled at how enthusiastic he was about the song. I love listening to those strings, it’s cathartic how they fall and find their way from chaos to calm. I’m so excited to share this track…and there’ll be more to come after that!”

For Roxanne, it’s been an arduous journey to this point, and one that’s required her to keep courage in her convictions in order to succeed. Brought up between Berlin and the West Midlands, she grew up obsessed with The Beatles and Alanis Morissette, and was soon determined to become a musician. To those ends, she left Berlin for London straight from high school and – with no financial support and no contacts in the city – got by balancing hospitality and admin work with the 90-odd solo gigs she played per year across the U.K.

Having built a loyal fanbase, her crowd-funded debut album, Heirlooms & Hearsay, arrived in 2017, leading to support slots with Lambchop, the Wainwright Sisters, and triumphant shows at Glastonbury, Cambridge Folk Festival, a packed album launch show at London’s Roundhouse (Sackler Space) and support from PRSF Women Make Music fund. In 2018, Roxanne played a sold-out show at The Lexington to celebrate the launch of her book, a tour diary called ‘Tales from the Rails’.

Meanwhile, Roxanne’s remarkably self-sufficient approach was recognised by the FAC (Featured Artists Coalition) who invited her to join its Board Of Directors, advising and representing artists alongside Imogen Heap, Radiohead’s Ed O’Brien and Blur’s Dave Rowntree. Roxanne also created FM2U, a music conference specifically from and for musicians, which aims to empower & educate as well as create a strong community of artist entrepreneurs.

“A beautiful masterpiece! She truly is a rising star –
If you get a chance to see her live, please do!”
(Janice Long, BBC Wales)