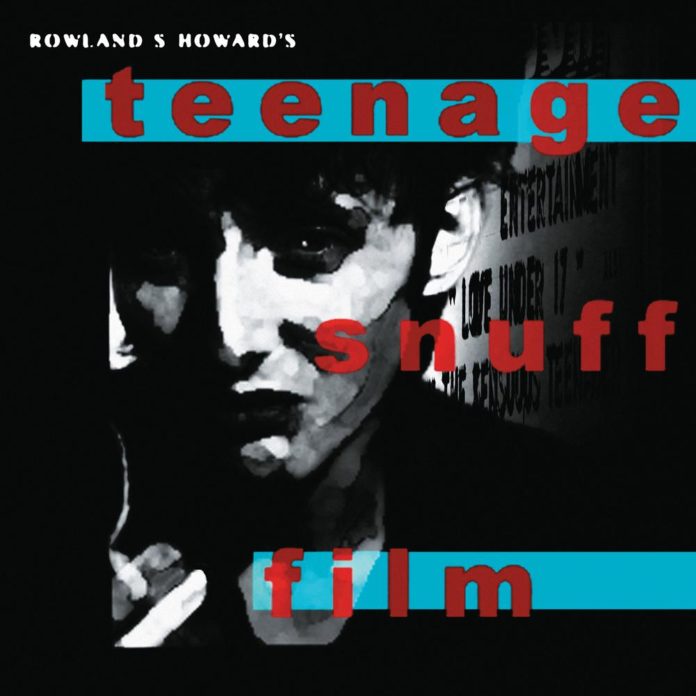 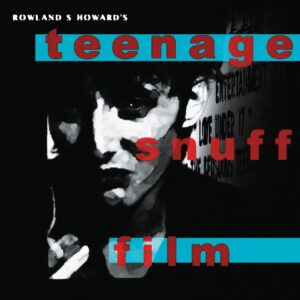 Rowland S. Howard is probably best known for his work with the Birthday Party during the years 1978-82, having started playing in bands since the age of 16 in the Melbourne area. His visceral guitar playing and song writing abilities were as much an important part of the Birthday Party as Nick Cave and, post-break up, Howard decided not to become a Bad Seed; it’s often the case that two creative sparks in a band is either one too many or the perfect storm for creativity. Howard went on to collaborate with artists such as Lydia Lunch, Barry Adamson, Jeffrey Lee Pierce and Henry Rollins to name but a few, which shows what regard his abilities were viewed on the alternative scene. He joined fellow Oz musicians Crime and the City Solution for a year, and later formed These Immortal Souls with his brother Harry, releasing two albums in 1987 and 1992. He released two solo albums, Teenage Snuff Film in 1999 and Pop Crimes in 2009. Both albums, criminally long neglected, are now being re-released by Mute.

Teenage Snuff Film, was recorded at the Birdland and Sing Sing studios in Melbourne, with Mick Harvey contributing drums, organ and guitar and Brian Hooper on bass. At the time of its release it received much critical acclaim. It’s certainly stood the test of time; it’s a majestic, dark classic, released as the world teetered on the edge of a new millennium.

Album opener, Dead Radio, sets the scene with its melancholic feel of late-night remorse and longing fuelled by drugs and alcohol. Howard’s voice is darkly romantic and angst ridden and the guitar is simple Americana twang. ‘You’re good for me – like Coca Cola’, summing up rock and pop culture perfectly in teenage rock sugar rush and pop culture idolatry. Howard is the hopeless junkie romantic at the end of the line, sharing a bed with the latest love of his life whilst feeding his addiction and holding on by the fingertips. It’s not glamourous but still attracts like a noir rock junkie fantasy and when he sings: ‘Everything is sacred, everything is true,’ for that moment you believe him. Breakdown (And Then…) has a deep, riders on the storm sound, with the drums a simple punctuation, heralding something portentous, sounding like a growing storm in a prairie landscape. It has a sparse, stripped back sound, like a broken-down drug den where the only colour is the tedious graffiti. It sounds out of time – existing in that space where redemption is searched for in rock n roll.

There are two covers on the album, Jay and the Americans 1961 hit, She Cried, where Howard takes almost too much delight in the grief he causes his ex., and Billy Idols’ classic White Wedding, which Howard strips of its 80’s production.

Further misanthropic behaviour is heard on I Burnt Your clothes, a music noir with psychotic guitar and the howl of a sadistic male setting fire to a woman who he doesn’t even know. The guitar screams like an animal in pain and you’re left thinking what the fuck…

Exit Everything is paranoid funk with a narration by Howard of broken dreams, unrepentant violence, lust, passion and decaying darkness, murder, madness and teenage mortality. The guitar is down the rabbit hole, descending into the abyss, vertigo inducing strings. It’s a nihilistic vision and at the end of the song the guitar shreds it all to pieces like a shriek of death. Silver Chain features long-time collaborator and on-off lover Genevieve McGuckin, on organ and co-writing credits. It’s an updated 50s rock ‘n’ roll song with dampened guitar picking, drawn out chords that sound like the last chords played on earth and vocals of love and murder. There is a manic violin solo that sounds like the crazed thoughts of a lost soul preaching in the streets.

Undone is the confession of a man possessed, a man who’s done something bad, maybe even something evil. It’s the confession of a man who’s ‘lost his hip, lost his cool’, all over a woman with whom he doesn’t ‘want to shake hands, but wants to shake hips’. The drums are a crazed palpitation and the guitars splatter over the song like visceral blood spurting across a car windscreen. It’s a song as brittle as broken glass. A dreamy opening begins Autoluminesence where the singer bigs himself up bigger than a rap star on speed. He’s bigger than Jesus Christ. He’s giving off his own light. But he’s alone. Just him and his thoughts. It’s slow time midnight, after leaving bars and walking the city streets. The solitude after the company. The solitude of thought after the bar room debauch.

Sleep Alone begins with discordant noise and ends the same way. The guitar is like an insistent buzzing insect niggling, niggling away whilst the drums pound pound into our heads and the bass thumps thumps thumps. The lead guitar is a simple riff – sharp and painful. It’s the song of a ‘misanthropic man’ who declares ‘I don’t need nothing from no-one/The needle’s in the red/Nothing to lose/Everything’s dead.’ It descends into feedback, the guitars stuttering, exhausted. It’s the sound of the end of the world. ‘The sky is empty, silent/The Earth is still as stone/Nothing stands above me/Now I can sleep alone.’

Ten years later in 2009, Howard released his second and final solo album, Pop Crimes. By this time he was suffering from liver cancer and was awaiting a transplant; for this reason the album was recorded quickly, but it isn’t desperate or looking back in anger, it’s a reaffirmation of Howard’s belief in rock ‘n’ roll to give a voice and a freedom to the underdog and the rebel.

The opening track, (I Know) A Girl Called Johnny, a beautiful duet with Jonnine Standish, is classic doomed desire between two people who are going to destroy each other in an explosion of worlds colliding. She is a ‘narcotic lollipop’, the ‘Joan of Arc, of teenage lust’, whilst he is a ‘pin up poster high school crush’, and a ‘new dance, zipping her up’. Shut Me Down is more downbeat, a slow blues groove, with dark, beautiful imagery: I’m standing in a suit, as ragged as my nerves. It’s a song about missing a woman, chased away because of the singer’s errors. It’s a song sung from the bottom of the bottle, with no idea where the next drink is coming from.

As on Teenage Snuff Film, there are two covers here. Howard attacks Talk Talk’s Life’s What You Make It, with a heavy disco beat, a razor-sharp guitar and menacing vocals that sound like the devil offering some sort of crossroads deal.  On Townes Van Zandt’s Nothin’ we get blues straight from the heart of darkness, a downbeat rhythm from the coal face of hope where all you mine is disappointment and heartache. The rhythm guitar is like a chain gang beating away, with the blues lead bending the notes like emotions left shredded: there’s nothin’ left.

The titular track is a nihilistic treatise with a heavy bass riff that drives the song along like Satan cracking the whip, laying down a funk beat for the guitar to splutter over with a nuanced psychosis. This is a ‘planet of perpetual sorrows’, with ‘open heart surgery kisses’, and the belief that ‘nothing good will come of this’.

Wayward Man has a beating bass and a sax like a shrieking, wild elephant with dramatic punctuation from the drums. It’s off kilter, as the vocalist declares with bitterness that he will always be a disappointment because he’s a wayward man. Ave Maria, on the other hand, slows down the pace, to create a melancholic mood piece of rain soaked streets surprised by the shadow of a cathedral, and the drifting sound of a choir singing. It’s a song of ‘treasons and shames’, of doomed love affairs and the perfect final bitterness: We didn’t dance on our wedding day. It’s a song that Jeffrey Lee Pierce could have written at his best.

Golden Age Of Bloodshed brings the album to a close, with its rockabilly waltz and a Doors darkness full of gothic storms and portentous signs. It’s neon nightmare poetry from the Book of the Dead, in this ‘worst of all possible worlds’. Howard declares: My life plays like Grand Guignol/Blood and portents everywhere.

Ten weeks after the release of the album, Rowland S. Howard died at the age of 50.