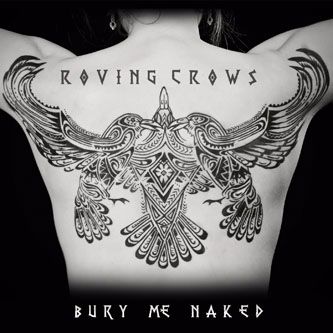 The first full album in four years from the Celtic folk rock fusion quartet, a band whose environmentally friendly ethos is as crucial as the music. What they call “the start of the journey.”

Almost inevitably,  the sound of any band revolving around a reverbed  fiddle links them with the likes of The Levellers, Ferocious Dog and Blackbeard’s Tea Party, the swirling anarchy led out of the comfort zone by the fiddle as a lead instrument. Not that they’re a one trick pony as the vast array of instrumentation and writing styles makes sure that the  more exotic banjolina and kalimba add to a what is essentially an enticing sonic smorgasbord.

Aside from the  title track that swirls in a hypnotic cloud, New York Love Song builds to a frenzied orchestral effect, almost psychedelic in an entrancing  pulse – a brilliant opening ten minutes which is watered down by the lighter by comparison moments which sees the Crows getting blown back to the mainstream  shore.

Fire Sky on the other hand is a totally jiggery folkery  instrumental fiddle showcase that’s held down by a driving percussion line and in strict contrast to the atmospheric The Last Breath which highlights  the fiddle in a more sombre guise alongside a spoken word eulogy. Quite touching in its creation, Paul O’Neill’s words evolving spontaneously as he heard Caitlin Barrett’s creation. The low key highlight of the set.

Touching on Americana and lonesome country and western influences, at the end of the day it’s the ten minutes of Glory Bound that provides quite the epic passage. A song “written in a lonely moment in a quiet house in a sleepy valley” it drifts through several phases, from an opening reflection on the glory bound road before a  crashing early climax that evolves into a world music trance beat  – look out Ibiza…

Aside from the songs that fit into the unremarkable and inconspicuous box, the Crows really come to life  where they push the boundaries and drift into uncharted waters. They might find it trying to carry the rabble rousing label, but no denying that when they hit their stride, they are at the top of the tree.

You can watch the video for Riverside  here:

All words by Mike Ainscoe. You can find more of Mike’s writing  on Louder Than War at his author’s archive. He can be found on Facebook and his website is www.michaelainscoephotography.co.uk