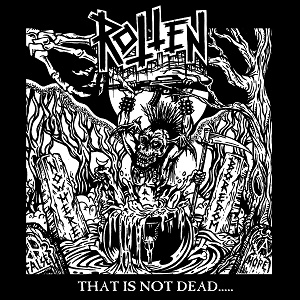 Rotten UK – That Is Not Dead… (HELLS HEADBANGERS)

Rotten UK hails from Rochester NY, home of the white hot and the garbage plate, but they have a much stronger spiritual link to the Mother Country and the harder, crueler times there under Thatcher in the early 1980s (there is even a sample from the “Interesting” episode of The Young Ones where Dawn French guests as an obnoxious Christian missionary). However, these are the bleak times we are regressing back to, with the DUP joining forces with the Tories in England and Trump’s presidency in the US an assault on common sense and the poor…

“The reflections of the past are the projections of our future” the album insert reads, and “Thatcher! Thatcher! Reagan! Reagan! It’s all happening again!”, chants cemetery-hopping frontman James Von Sinn during the refrain to fourth song “Their Dreams”; a sharp, cyclonic whirl of primitive pugnacity that demands some old school counter clockwise circle pit action.

There is a great cross-pollination of styles on That Is Not Dead…, from the melodic aggression of UK82, to anarcho-punk rants expounding on animal rights (“Animal Sacrifice”), to doom-laden speed metal, all served with a side of that classic Bat Cave deathrock sound, as Rotten UK create their own trademark musical garbage plate. The primary theme of That Is Not Dead… is being forsaken by humanity, and it takes aim at all the major authoritative figures of falsehood in a very direct way, which is something that never gets old for an ireful listener embittered with the world like myself.

From religion to the royals (“Crucifiction”, “Royal Blood”), Rotten UK openly oppose useless symbolic fallacies and the perversions these institutions uphold. The world’s unfolding upheaval is keenly felt by the band, and That Is Not Dead… is like a call to arms and a summons to the freaks of all outsider genres and scenes to come together and revolt. It is an appeal delivered with plenty of panache and spleen. The playing is tight and the songs are short and sharp but also entertaining in their oratorical showiness, and it’s not surprising one of the band’s performances was recently recorded for an upcoming horror feature film. Rotten UK revels in the theatrics of their existence as beautiful yet wrathful night creatures and this gives the material a whiff of high camp bombast;  Von Sinn’s gloomy, peevish baritone commands attention, while the production echoes in a gaping sepulchral darkness as if the listener is trapped in a mortuary. The metal and crust crossover also ensures that these are not your usual crimp-haired wraith-like cry babies of gothic rock, but hardened generals ready to lead armies of angry alienated youth into war. 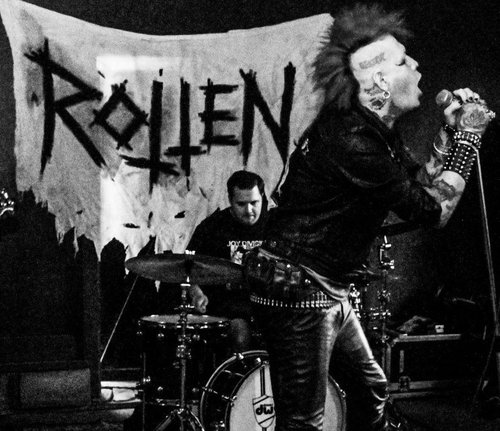 Rotten UK just wrapped up Sinnfest last weekend, an annual showcase celebrating Von Sinn’s birthday with some of the best underground acts performing, along with other fun stuff like flea markets and a punk rock barbecue. Upcoming shows listed below:

Rotten UK is on Facebook, Bandcamp and Instagram. Look out for new single “Waiting For the Bomb” to be released on Loud Punk Records in August.