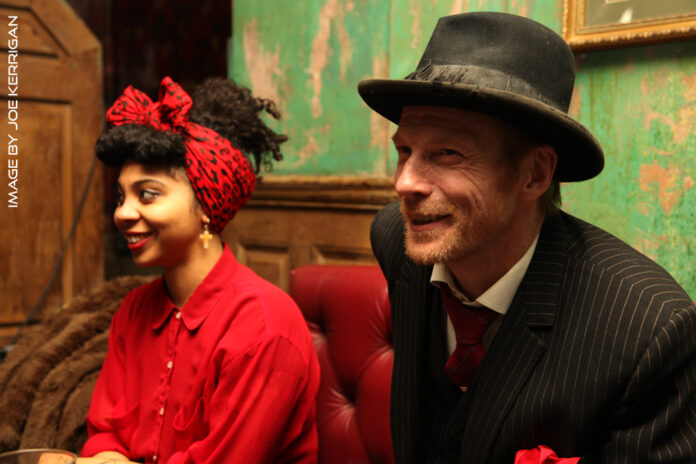 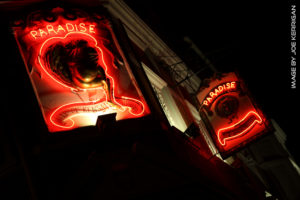 Tonight’s venue is the swanky and elegant Paradise (by way of Kensal Green). The band is Rotten Hill Gang. A total of 12 RHG band members take to the compact stage at various points during the set. As the group assemble on stage, they’re visually eclectic even before they strike a single chord. The show is tight and the oft-changing vocal line-up is intelligently measured and subsequently, actually enhances their performance.

The band has had much attention recently. Gathering pace from various RHG TV shows and cherry picked gigs around (mainly) West London. The wealth of talent amongst their ranks gives them an edge and durability that other bands must envy. The band is formed around Gary Stonadge (ex. Big Audio Dynamite II and also a DJ) and longstanding accomplice Reds (the band’s Street Poet).

The crowd is a mixture of fans and Paradise regulars which gives the room a stylish spectrum of fashion and cool. After an unexpected (and largely unnoticed) delay, the band get a warm reception when they finally take to the stage and thanks to the lifting DJ set by AJ and Joe (Whitehouse) the room is in a party mood in this choice venue. First impressions of RHG are that the versatility is owed to the capable array of the 5 vocalists on hand (including Reds, Hollie Cook and Annie Bea), as each one dips in and out of this neat set. But the sound is augmented by the deftness of the musicians/DJ. The overall funky hip-hop collective sound is underpinned by interesting rock/reggae beats and samples. Somewhere in the middle of this ensemble, the 2 inventive guitarists weave their magic, to summarise, it’s an admirable gig. Not many bands can deliver an exact balanced blend and RHG gift a desirable fusion. 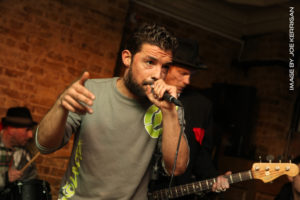 Tonight the set includes one or two new songs. The crossover of dub reggae/rap/melody comes by way of Rap & Roll, Street Super Star, Art of Legal, City of Cold Steel, Carnival and an excellent rendition of The Message, again with vocal deliveries shared. Straight out of the trap, they break into the old school rap of Rap & Roll. The vocal harmony’s float dreamily above the tune and there’s some excellent DJ scratch sounds too.

The second song Cap Hill is bursting of smart samples. This is so danceable. A piercing Hammond-like note resonates above the Public Enemy beats and it contains a cheerily pinch of Steam’s Kiss Him Goodbye as well.

In fact each tune probes into a different musical concoction whether it’s the heavy heart stopping Cool reggae that follows, the determined Hammond and Donkey-beat percussion lilt behind Annie’s lead in City of Cold Steel – which provides a seamless backdrop for the nimble rap poetry or the peppered keyboards and underplayed, clipped guitar riffs. 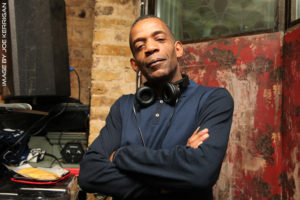 Another deep groove wins the audience. Practically anyone that has room to move is now swaying to the band. An outstanding rap balance, straight out of Rage Against The Machine’s own back-catalogue. An honest, hard-working performance by this top band. Just wish I had time before heading home for the encore. 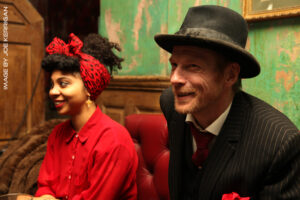 Earlier, I caught a few words with co-founder Gary Stonadge and band DJ [AJ] before the gig…

So Gary, there are more arms and legs to Rotten Hill Gang than a regular band, it seems like a project. Would you agree? How do you see yourselves?

GS: “It’s like a collective, a bunch of people from the area. When it started out it was just me and Reds (RHG’s street poet). People [have been] joining in and now it’s quite a big group. Everyone’s doing their own [separate] bit too. Hollie’s got her band and Annie’s doing hers, so it’s a collective of people. It’s the best way to do it, I think.”

As you say, it’s collective. Do you have any long term goals?

GS: We’ve got a squad system, like a football team, a reserve for everyone. There’s an album coming out in April/May. We want to continue this as a long term project but it’s just down to the availability of everyone. The idea it really is to also get people launching their own things as well.

Rotten Hill Gang is part of the community and West London is your thing. Obviously there’s a nod towards Big Audio Dynamite. I also see the Streets in the mix. Who else do you sight as an influence?

GS: Public Enemy, obviously the Clash, Jimi Hendrix and Eminem. Its [The RHG sound] got Rock n Roll with Hip Hop and Hollie’s Reggae stuff. Everyone’s got their own little bit that they add to it. Annie does her psychedelic material. Her own band is the Hypnotic Eye.

As you’ve got a squad system, when coming to a gig like the one tonight, who decides who is involved?

How long have you been involved, AJ?

AJ: “In the beginning when it was him [Gary] and Reds, it should have been me, Gary and Reds. But other things come up…”

You’re both on the album, who else is?

GS: Everyone who plays [live] is on the album. AJ does some scratching this time. There’s Richard Archer from Hard-Fi, a couple of guys from Alabama 3 are involved too. We’ve got different people on all the songs. We ask and they either say Yes or No. most of the time they say Yes which is really nice.

That’s cool. You have a lot of interest from various luminaries too. Getting members of Big Audio Dynamite, Julian Temple and Chris Salewicz involved. It must be a great confidence booster for you.

GS: Yeah, definitely. Don Letts is around a lot as well. It was hard [for all concerned], regarding Roger Pomphrey. We were only going to do one TV show. Roger was the one who got all the crew together. Unfortunately Roger died just a couple of weeks ago. He was very influential with the TV stuff. The TV shows are easier to do that than the band. Everyone wants to be on TV. Ha!

What’s coming up later this year then?

GS: We’re playing some gigs around London and then the StrummerCamp festival in May. We’d like to do more. But there’s never been a lot of money around to finance these things.

Good luck for the future.

All words by Neal Wright. More work by Neal can be found in his Louder Than War archive.