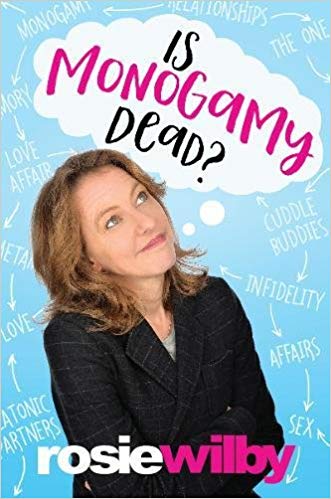 Comedian (in our world of equality, we no longer seem to do comediennes) and current Resonance FM Radio Diva co-host Rosie Wilby takes up the quest to ponder the concept of monogamy.

Is monogamy dead? Sounds like quite a simple question doesn’t it? Think again. It’s complex. VERY complex. As a heterosexual male in a (very) long standing married  relationship perhaps I’m not necessarily the target audience, or even the best person to ask, having never even pondered the thought myself. Suffice to say that some of the revelations and musings prove  most informative and revealing. Perhaps not quite as open minded as (a) I thought I was, or (b) as I should be.

Inspired by – if that’s the correct phrase – Rosie’s own relationship journeys and questioning the desire for fulfilment in forming, building and maintaining  those relationships, what’s clear is that we are complicated and multifaceted individuals. More than just interrogating the notion of  monogamy (and beyond), perhaps the question would just be as appropriate if we were to  substitute the word monogamy  with ‘honesty’ or  ‘sex’ or  ‘love’.

There’s some element of academic research and thought gone into this folks. A few stats are scattered  in for illustration from various studies plus references to Kinsey’s classic Fifties study of sex (as opposed to love – leave that to the poets and philosophers) and more contemporary researchers such as Qazi Rahman. A gentle musical thread also cuts a narrow path  – in particular, Richard Hawley getting a namecheck or two which seems quite apt as a good musician friend of mine once described his music as “the sound of falling in love.”

Naturally, humour thankfully plays its part; assorted bits and pieces  tickle you – the one that remains with me concerns the seductive vision of recreating a pain au chocolat by ripping a baguette in half and sticking a Galaxy between the two pieces. Don’t try this at home…

Ultimately, the crux comes on the last page – don’t turn straight there for the spoiler – although it concerns changing attitudes, thinking and language.  Sadly there’s no ‘yes’ or ‘no’ answer, but a whole deal to think about.

And a couple of footnotes – Is Monogamy Dead? has been longlisted for the Polari First Book Prize which rewards the best of LGBTQ writing. Nice one.

There’s also a comedy talk about the book and the research which Rosie will present at Nozstock on Saturday 21 July at 3.30pm as part of the Department Of Cultural Affairs line up in the Altered State area and also on Friday 27 July at 4.45pm at the Port Eliot Festival in the Idler Tent.