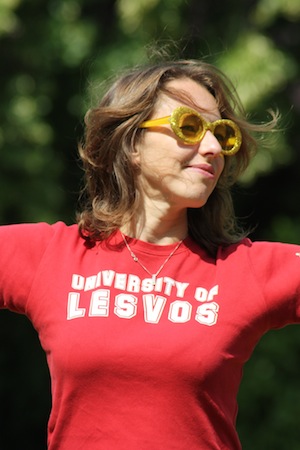 Rosie Wilby; writer, broadcaster, comedian and Louder Than War favourite is taking her theatre show: 90s Woman out on the road. Willow Colios caught a recent preview of the show in east London.

Inspired by sorting through “a load of old crap in dusty boxes” from her parents loft, Rosie Wilby’s new show 90s Woman takes us with her on a quest that is both personal and political, delving into the past and her years at York University. We’ve loved her previous shows The Science of Sex and How (Not) To Make It In Britpop at Louder Than War but this one goes back further to the beginning of the decade.

Searching for the core team behind the University’s Women’s Newspaper ‘Matrix’, she meets old friends and colleagues to see both what’s become of them and their feminist ideas, but also to get perspective on what has become of her own.

It’s a fascinating look at the parallels between the student politics and feminism of the early 90s and today and Rosie brings it to life brilliantly in storytelling style that is more interactive than a standard stand-up show. The filmed interviews with old compatriots are frequently hilarious and the differing memories of events give fascinating insight into the Matrix story.

Actual issues of Matrix itself are also part of the show. Projected on the screen we see a charming DIY fanzine-style paper full of the vibrancy of youthful, progressive and strongly held ideas. Particularly funny and poignant is the wish list of “Fantasy Headlines” that appeared in one issue:

These and other in the list are not a bad checklist against what progress we have made in the last quarter century. It’s testament to how far we have come in the UK that we will have the first Gay weddings this year. That fact can be seen in beautiful relief against the mock gay and lesbian wedding that Rosie and the York students held on valentines day 1991; hilariously recounted in the show. There are some great photographs as Rosie recounts the stories, but understandably no video footage; there were no iPhones or YouTube back then!

Some aspects of the politics of the early 90s feel somewhat retro and yet others are frighteningly echoed right now, 23 years later; a hated Tory Government seemingly on it’s last legs anyone? In fact, the nemesis of Matrix, a kind of sub-Bullingdon Club society called Derwent Death Squad also feature in the story. They’re a group of posh boys who didn’t quite make it to Oxbridge, but have a name that sounds more like the Lake District branch of Greek fascist party Golden Dawn. How do Marix interact with these rotters? You’ll have to go and see the show for yourself!

Rosie also goes back to York to see what, if anything, has become of Matrix. Returning to the theme of digging around in lofts and old filing cabinets, she finds that 15 years later some students have done just that in student’s union and did launch the paper again, brilliantly named Matrix: Reloaded. Interviews with the re-founder also trace the line from 90s feminist students into the 00s and beyond and take a real look at battles fought and won and how feminism is perceived by students and young people now.

Although billed as a theatre show, 90s woman is riotously funny as well; a personal tale of reminiscence of student life, unrequited love and  the re-discovery of old friends, as well as being a fascinating insight into the history and progress of feminism and political ideas in this country.

It’s sure to have you laughing out loud and leave you feeling refreshed and inspired.

May 30 at Cambridge Junction.