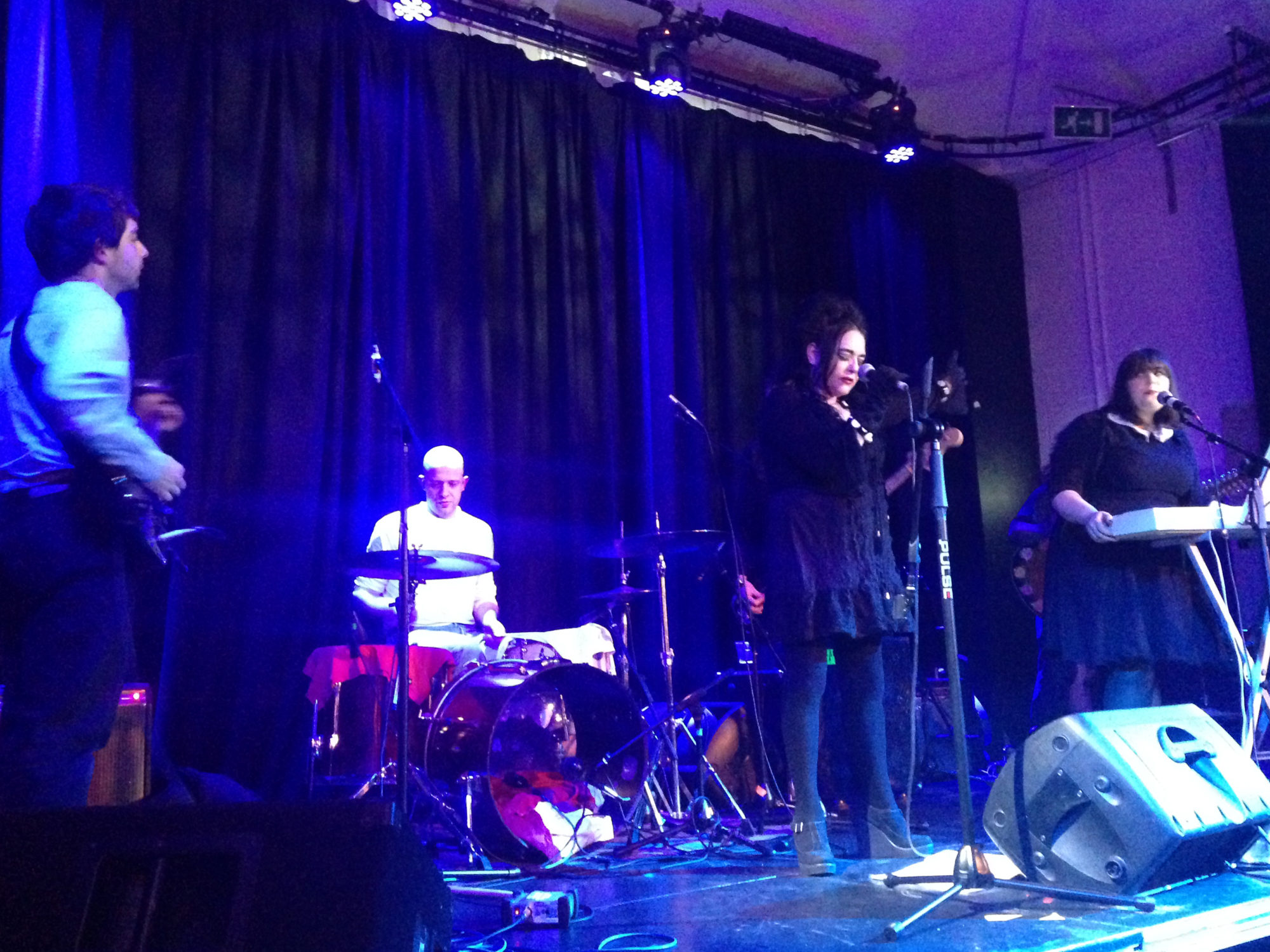 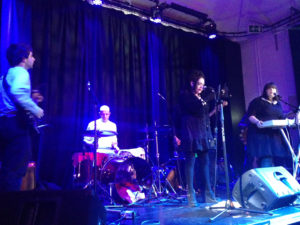 Rose McDowall’s performance in Preston, the night before a home coming gig in Glasgow, held the appreciative audience joyously enthralled and captivated.

Joining Rose onstage, in an evidently genial co-mingling, were four talented Glasgow based musicians (from Vital Idles, Current Affairs and Apostille) and TexasBob Juarez, a latter day member of The Television Personalities.

In all black attire with shimmers of fairy dust and a giant winged butterfly amid voluminous hair, her graceful bops and twists and expressive gloved hand gestures enhanced her impassioned delivery. A deeply searching introspection is disclosed in the incisively solemn lyrics that emerge in every song.  The set started with a relaxed air of soft drumming behind the harmonious lilting riffs of ‘Ruby Tears’, followed by the building intensity of violin and bright toned guitar on ‘Love Dies’, stirring reminiscences of the Velvet Underground. Rose’s vocals seemingly soar into an unearthly register as she sings ”…Darkness take my heart that I might die. Dreams unfurl my wings that I might fly.” Another Sorrow song, the hauntingly beautiful ‘Let There Be Thorns’ was interspersed with a trio of early Strawberry Switchblade songs. Reprised with a fuller sound of substantial bass and heavy dampened drums, subtle keyboards and prominent jangly guitar, on occasions the live sound was more in the vein of 60’s psychedelic rock acts such as Shocking Blue. Several more revitalised gems from the mid ‘80’s, brought to life as Rose McDowall solo releases over the intervening years, were performed with equal vigour. We were even treated to a sensational version of the fondly remembered Strawberry Switchblade chart hit ‘Since Yesterday’. Culminating with ‘Cut With The Cake Knife’, the title track of her 2015 reissued solo album on the Sacred Bones and Night School (UK) labels. Rose blended close harmonies with Joan Sweeney, the keyboarding violinist on the night, at times poignantly subdued, then rising to a crescendo, blissfully most effective in this song where the word “Cut” became increasingly emphasised.  She left us grooving with a re-energising rendition of ‘Deep Water’.

Rose McDowall’s unique vocal expertise stands as an enduring component of many recordings by luminaries of the esoteric underground, most notably Coil, Nurse With Wound, Current 93, Psychic TV, Death in June and Sorrow.  Beyond the recording studio the intensity and scope of her voice is conveyed to an even greater magnitude when interplayed with a transformative live psych-rock backing. The lead vocal is so clearly to the fore that every word is discernable, along with the textural rolling ‘O’ and ‘R’ inflections of her Glaswegian accent. This seems a fitting reflection on the 60’s pop sensibilities of Glasgow punk and the Postcard era bands where Rose McDowall first found her musical calling, playing stand-up drums in The Poems. Speaking to her after the show, I gather that she has an alternative London-based group of musicians that perform her songs in a more experimental acoustic neo-folk manner in small, intimate venues. It will be intriguing to compare the two live experiences as we await the emergence of her new material. On such a dark day, coinciding with the inauguration of Trump, this performance replenished the light with such a voice that could charm the moon from the night’s sky.

Also playing in support were P-town mad scientist rockers Zvilnik, who’d left their tinfoil hats and white coats in the lab. A last minute intervention was provided by the unruly Vukovar, an industrial infused post-punk threesome from St Helens. Vocalising in a guttural Alan Vega style rhythmic murmur, at times convulsing into a writhing ball of energy, the front man seemed to be channelling rage from a thousand conflicting messages. Underpinned by tightly controlled repetitive snare hits and the automaton stare of the drummer, an engaging display of fractious chaos ensued.  A few songs in, we witness acts of apparent spontaneous destruction of the bassist’s guitar as it’s thrown & kicked around. Unbeknown to us it is not part of the set. He leaps off the stage in a wild frenzy seeking a replacement for the defunct instrument, as the steady rhythms and keyboards from the singer continue to arrest our attention. Any songs from their second album ‘Voyeurism’ (selected by Graham Duff in his epic best album list of 2016) were barely recognizable apart from the bassline intro from the Peter Gunn theme tune and catchy synth from the excellent ‘Masterpiece’. The impromptu circumstance and confrontations unleashed on the unsuspecting audience befits the unyielding tension of a Vukovar performance.