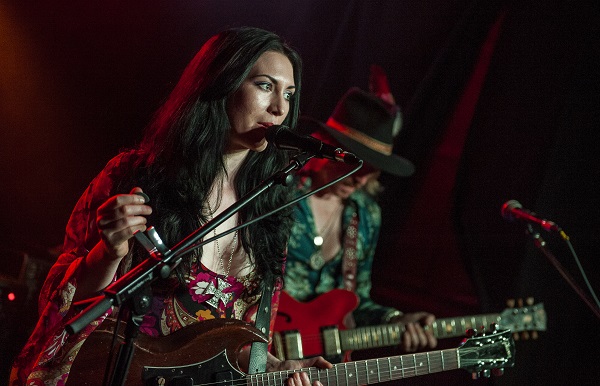 Along with the startling cover graphic of her new album, the “live and electrified with her groovy new group” billing spoke volumes when Rosalie Cunningham came to town.

As proof of the old maxim of ‘always see the support band’ GU-RU did a first-rate job of warming up an already sweltering room with their flute and keyboard-led combo. Kudos to Lee Spreadbury doing the first of two shifts on keys and all polished off with a dashing set of robes which must have gained a few ounces in sweat – how we suffer for our art. Straight out of Hillage/Gong/Tull territory their sound and genre seem to have suddenly emerged from a trough into a rising peak and proved a perfect start to the evening in setting up a cool vibe.

In complete contrast to the usual black t-shirted crowd, Rosalie and her stage full of musicians appeared decked out with masses of multi-coloured costumes resplendent with big sleeves and big flares that might have suggested a raid on Afflecks, such was the sartorial haute couture on display. 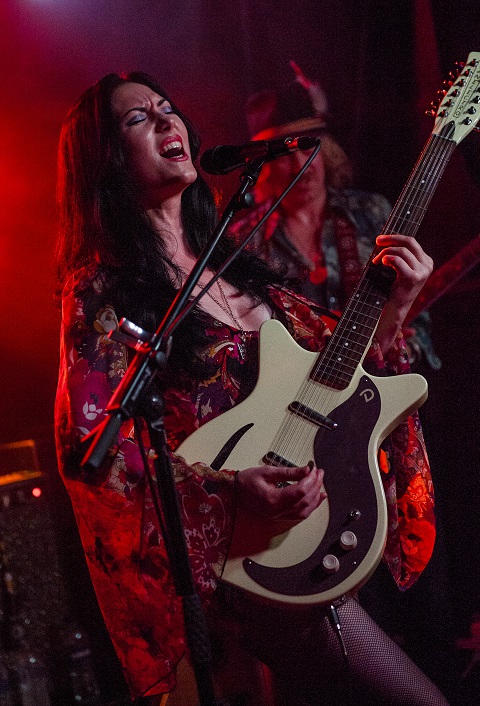 And there was music to match, with the new album (our highly favourable review here) pretty fresh in everyone’s brains and awaiting to see how it translated into its natural environment. (aside from us lucky press souls who’ve had the chance to let it become thoroughly absorbed during the pre-release weeks).  Retaining Purson drummer  Raphael Mura, the new band combined bassist Alpha Michelle and Rosie’s partner Rosco Levee on guitar, it’s a band that’s been described (possibly by Rosie herself) as a  “shit hot” outfit (a favourite term we haven’t heard since watching The Bar Steward Sons Of Val Doonican at Cropredy 2019). Ranking up the melodrama with the new material, the album was played pretty much in full and taking up a rawer edge with the epic A Yarn From The Wheel saved as a closing tour de force. There was no way she can abandon the Purson songs just yet so the icing came in the form of Desire’s Magic Theatre getting a workout from the band that proved not too far from its distinctive shape yet with enough electricity and energy to give it a fresh feel. Sky Parade plus a rare treat of a live Chocolate Money had one fan calling “It sounds great!” but that was only half the story; a gig that wasn’t only sounding good but one that offered a wholly immersive experience. Manchester loves Rosalie Cunningham and the feeling is mutual.  Swirls and swathes from the keyboard and two-guitar frontline, songs about cardboard flowers crying with raindrop tears and if you care to close your eyes, you’d be wallowing in strawberry fields.

How long will she be ex-Purson? She’s probably lumbered with the label forever, yet her latest incarnation as a musician and name  in her own right and with a band who’d score impressively in fantasy league terms, Rosalie Cunningham  seems set to arise from being an ‘emerging talent’, phoenix-like from the Purson ashes into an era where it’s good to be groovy and once again fashionable  to be with it and hip.