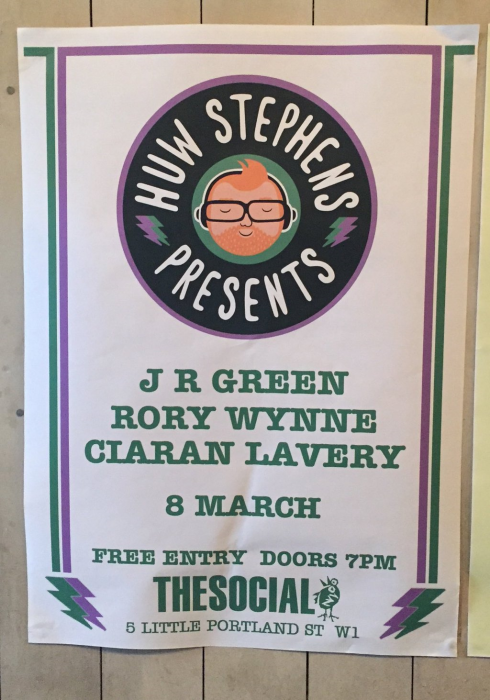 Once you’ve seen Big Ben a couple of times and bought your own watch there really isn’t much else to see in the centre of our Capital city.

The Social is one of the very few attractions left.
It’s ten minute walk from the still busy 100 Club and this tiny bar has become a nice little venue that one or two of us have visited recently on a Tuesday night to catch  a glimpse of yet more of those up and coming musical prodigy’s that the BBC’s Huw Stephens (absent this evening on sick leave) has put together.

And these nights are free entry.

Ciaran Lavery is a singer songwriter with a great sense of humour, a batch of pretty cool tunes and a voice that stops any chatter that this room could be tempted into producing whilst the live tunes are being performed. We’re already searching out his tunes, his history and his future. His future includes a few shows at South By South West this month along with a very long list of shows around Europe.

Give or take a year or two, the combined age of the trio that follows Ciaran may still be lower than the man in the corner, coughing, sniffing and being grateful that he’s probably made it home to overdose in more lemsip before the band have even began loading up their car (which unfortunately means that J R GREEN didn’t get seen or heard).

Rory Wynne has already made one or two bold decisions in his short life one assumes. It’ll be his name fronting these songs and these songs weaving their way over the superinternet highway thus resulting in a car full of equipment and a couple of mates coming down to entertain the likes of us on a cold Tuesday night (Or to be precise, literally a “School night”) from Stockport.

The bad news is we’re still a generation away from not hearing the influence of Sheffield’s Arctic Monkeys in 99% of bands who haven’t started shaving yet but the good news is that these people do know how to throw these simple songs in our direction that remind us at times of what we’d imagine The Buzzcocks may have sounded like before they got anywhere close to recording or writing Spiral Scratch. The bass playing appears to come from Early Scottish favorites The Prats. If that comparison is lost on you don’t look it up however if you remember The Prats you’re probably scuttling away up in the loft now searching for that long lost Earcom twelve inch and wondering if Rory was force fed this piece of vinyl by his parents whilst he rocked in his pushchair (and even if that happened that would have been about twenty years after it’s release!)

It’s “Why Don’t you?” that’s made us turn up here, a simple low-fi buzzing tune about love and romance and when Rory asks “Why don’t you return my calls” he’s probably still a life time away from singing “Stop Bloody calling me all the bleedin’ time !”

Yes, he’s that young, he’s been doing this for years and it’s still very early days for Rory Wynne.This is a good start, he made the decision to travel down to the big smoke to play us some of his songs before school.
And some of us are very grateful.

This is that tune …